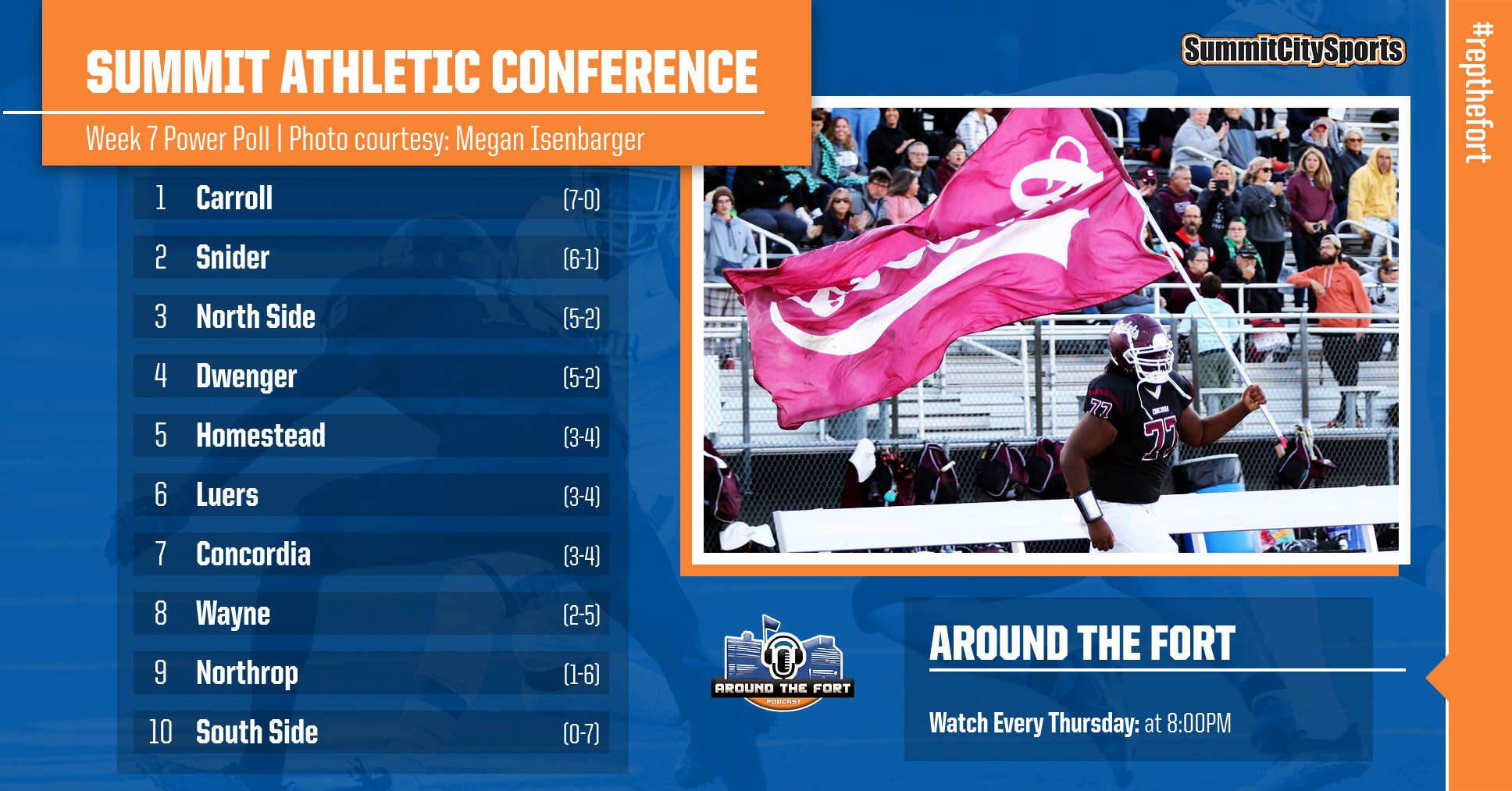 The Chargers just kept on rolling, even when facing their rival the Homestead Spartans, this team dominated throughout the game. From the very beginning, the Carroll offense looked unstoppable scoring a touchdown on each of their first 5 drives. Jimmy Sullivan looked comfortable all night long in the pocket as he threw for 246 yards and 3 touchdowns while completing 75% of his passes. His two favorite targets on the night were Cam Herschberger and Hansen Haffner. Herschberger was moving the chains all night for the Chargers with 11 receptions for 129 yards. As for Haffner, he was able to haul in 5 catches for 85 yards and 3 touchdowns. Defensively the Chargers were once again phenomenal outside of two blown coverages which accounted for the Spartans’ 10 points. The Chargers played near perfect all night long. Carroll was able to stifle the Spartans’ run game with 7 TFLs. Ashton Pesetski was also able to get his 9th sack of the season against the Spartans. Looking ahead to next week the Chargers face the Cadets as they look to clinch at least a share of the SAC title.

Last week the Panthers snapped a two-week streak of scoring 49 points as they scored 48 in a shoutout victory against the Bruins. Since falling to Carroll in week 2 the Panthers have scored 40 or more points every week while outsourcing their opponents by 40.5 PPG. It’s safe to say this Panthers team still feels as though they have something to prove as they have become more and more dominant each week. In week 7, Snider was once again dominant in all aspects of the game, connecting for three touchdowns through the air, 2 on the ground, and 2 coming from the punt return unit. Kamari Juarez was responsible for two of those touchdowns as he caught one and returned a punt 72 yards to the endzone. Lukas Rohrbacher once again came up big for the Panthers’ defense with 8 tackles and a forced fumble. Next week the Panthers will look for their 6th straight victory as they face Bishop Dwenger.

The Legends passing attack was on full display against the South Side Archers as quarterback Bohde Dickerson threw for 6 touchdowns. Bruantae Johnson hauled in 4 of those TDs which now gives him 7 touchdowns in just the last two weeks. Demarrion Jones and Kaden Hurst were also able to each bring in a TD grab. Defensively, North Side was able to control the game with 5 sacks, two of which came from DaVon Doughty while Tristen Newsome also got an interception for the Legends’ defense. This team’s potential seems to rise every week as we have seen both the run game and now the passing game just completely take over the game. The rising Legends now look to showcase their explosive offense once again when they face the Bruins in week 8.

The Saints were able to squeak out a close win over Bishop Luers even with what seemed to be a one-dimensional offense that completed only three passes on the night while they rushed the ball 48 times. Toby Tippmann was the key for the Saints’ run game as he rushed for 117 yards and a touchdown. The overall defensive effort also deserves a lot of credit for the Saints as they got 7 TFLs on the night while holding the Knights to just 12 points. CJ Davis was a big playmaker for Dwenger all night as he got 6 tackles, 1.5 TFLs, 1 interception, and a receiving touchdown on offense. The Saints will face the tough task of the Snider Panthers as they will look for their 3rd straight win.

The Spartans’ struggles carried on into week 7 as they took their 4th straight loss which matches the longest losing streak in Coach Zolman’s tenure with Homestead. Early on in the week 7 matchup against rival Carroll it seemed as though the Spartans could compete scoring on each of their first two possessions and even taking a 10-7 lead when Peyton Slaven and Mason Auxier connected on an 80-yard touchdown. From there the Chargers just became too much to handle as they finished off the game with 45 unanswered. With the loss, this is now the latest in a season the Spartans have been below .500 since 1994. This week Homestead will look to get back to .500 in a game against the Wayne Generals.

The Knights battled against their rival Saints all night long in week 7 and even held a 12-10 lead in the 4th quarter but it was not enough as they fell 17-12. Bishop Luers found some success in the passing game as Brayden McInturf brought in three catches for 31 yards with a touchdown. Nick Thompson also made big plays for the Knights with 7 catches for 86 yards along with 12 tackles and one TFL. Jackson Mccullough came up with an interception for the Knights’ defense. On the season Bishop Luers is a team that has flipped back and forth between a win and a loss every week never going on a two-game streak and they will look to continue that pattern this week when they play the South Side Archers.

The Cadets’ Landon Kaschinske got his first carry of the season against Wayne and then continued to get 33 more carries and he finished the night with 259 yards and 3 TDs on the ground. The Cadets also made a lot of big plays defensively including 5 TFLs, 2 sacks (Tyler Moher and Grant Hayworth), an interception from Ajani Washington, a fumble recovery by Landon Kaschinske, and a blocked field goal by Chris Hawk. The Cadets will look to carry their momentum into week 8 as they face the daunting task of the Carroll Chargers.

In a week 7 close loss against the Cadets the Generals were able to get the passing game going as Christian Trimble threw for 233 yards and 3 touchdowns. Deonte Williams was the Generals’ leading receiver as he brought in 7 catches for 110 yards and a touchdown. Ki’shawn Toles and Jacob Sharin got the other two TD grabs for Wayne. Deonte Williams was able to get an interception for the Generals’ defense as Wayne was able to force a total of three turnovers on the night. This week the Generals will try to carry the passing attack success into week 8 and pair it with what has been a dominant run game all year when they face the Homestead Spartans.

Week 8: vs North Side

The Panthers were just too much for the Bruins in week 7 as they controlled throughout. On the year the Bruins have had some great playmakers such as Jayden Schmenk, Jaylen Williams, and Julante Hinton but they just weren’t able to get them going in week 7. Northrop will now will face the North Side Legends in week 8.

Rival North Side was just too much for the Archers in week 7’s totem pole game. The Archers were able to connect for a touchdown through the air as Larrenz Tabron connected with Jayden Morris from 20 yards out. As South Side still looks for their first win of the year they will be playing the Bishop Luers Knights this week.