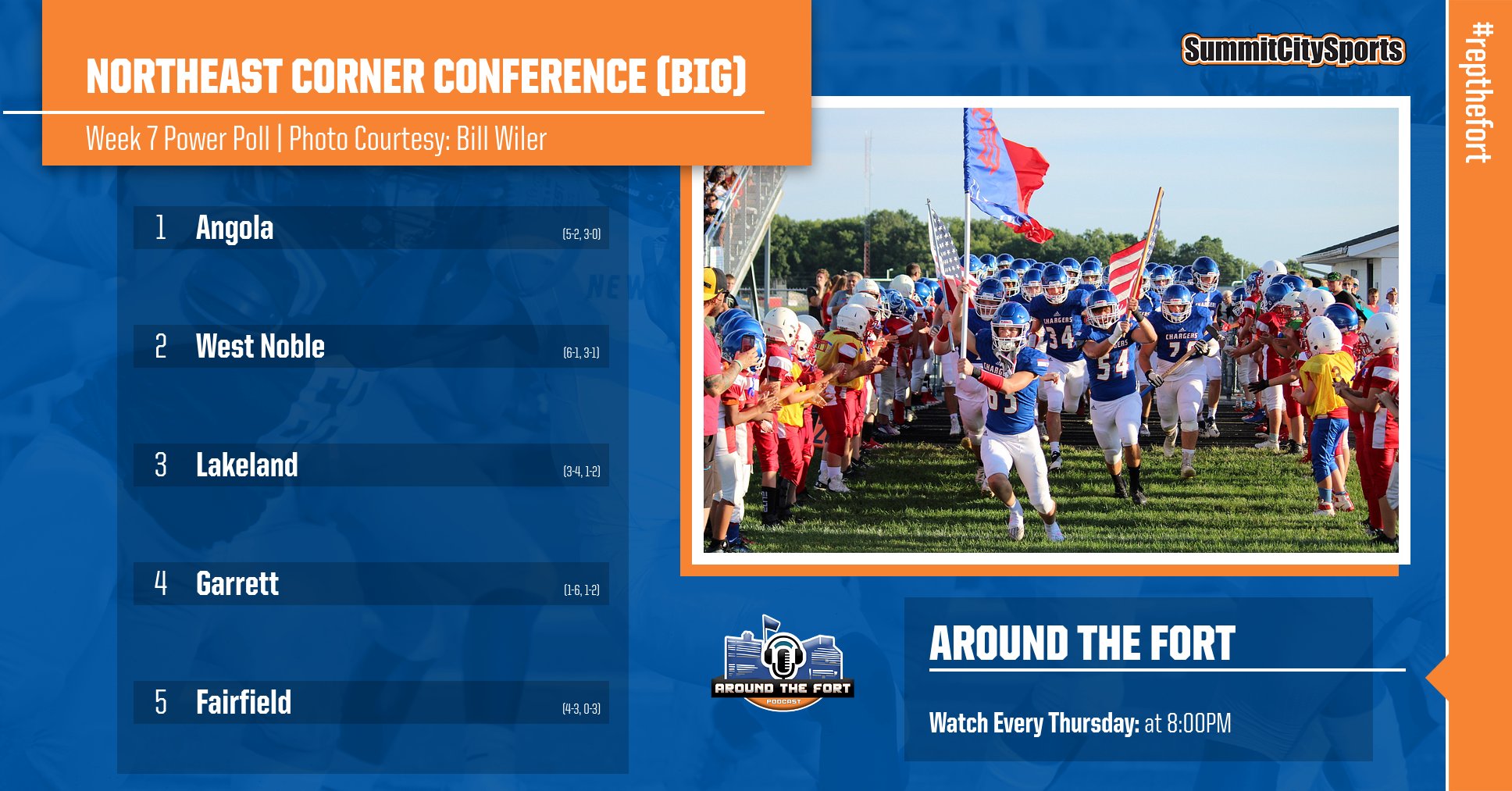 We’re coming down the final stretch of the 2022 regular season and this is the week that will decide the NECC’s Big and Small School Divisions. Let’s kick things off with the Big School Division, highlighted by Big-Time wins and a Big-Time Upset.

Located in Angola, IN (Steuben County)

The Angola hype train continued into Mishawaka where the Hornets shutout the Marian Knights 28-0 led by Andre Tagliaferri’s monster night of 176 total yards and 4 total TDs along with his 9.5 tackles. Angola’s defense held Mishawaka Marian to just 178 total yards and 76 on the ground.

Now, they get to take that momentum into Angola’s version of rivalry week as they make the 32-minute drive through I-69 and into Memorial Stadium to face a recently rejuvenated Garrett Railroaders squad that posted season highs in points scored (28), points allowed (6), rushing yards (282), total yards (343), rushing yards allowed (118), passing yards allowed (58), and total yards allowed (176) (all against Fairfield). The big thing for Angola is slowing down Robert Koskie who has averaged 137.3 rushing yards in the last three games with 5 total TDs in that span. Look for the studs on defense led by Jake Land and Jack Archbold to be key guys.

Located in Ligonier, IN (Noble County)

What do I keep telling you guys? The los caballos grandes keep winning big games! They continue to Pru-ve-itt! While WN had been flexing their muscles on offense, week 7 showcased just how strong those stallions truly are on defense. It was an absolute clinic watching the Chargers staying resilient, confident, and constantly making big stops. The deflections, the pick, the sack, the goal-line stand on 4th and Goal, and denying Lakeland’s 2-point conversion and sealing the 7-6 win. That is Classic County Football!

Xavier Yates did not play like a freshman that night because he was constantly diving for loose balls, batting them away, and putting his heart and body on the line when the defense needed it most. It was a complete team effort, but I thought Xavier really caught my eye in how he shut down Owen Troyer.

Now, we will get to see Monte’s Pistol at West Noble entertaining Paul Sade’s Wing-T from Busco. The speed and swagger of Busco’s athletes vs WN’s size and athleticism of the Chargers’ stud horses. Give me this matchup all day, every day. Stay tuned. There is more to come about this matchup.

Located in LaGrange, IN (LaGrange County)

Despite the outcome not going in Lakeland’s favor, Garrett sent them a nice gift basket (sugar, spice, and everything nice) by taking care of Fairfield. Therefore, Lakeland does make the small but efficient jump into the top half of the division.

Let’s be clear…not even Barry Allen aka the FLASH would have been able to score touchdowns on this West Noble defense as Lakeland was held to just six points despite mustering 296 yards of total offense. There were series of drives where Lakeland had ALL OF THE MOMENTUM in the world, yet they couldn’t find the end zone. There were issues that night as the fact that Lakeland failed on all five fourth downplays and couldn’t convert on the two-point conversion. That’s football. Some nights even superheroes are mortal. Just look at SuperSam….he always has his weakness, which is kryptonite. That night, Lakeland’s was FOUTH AND GOAL. But there is no time to reflect on the past as Lakeland will have to figure out the recipe that apparently teams are starting to figure out on Fairfield’s wishbone offense that went from being unstoppable to well vulnerable??

If Lakeland can come out with that same intensity and effort that we’ve been seeing following their Week 5 loss to Angola, Lakeland has all the talent in the world to potentially beat Fairfield. But it all comes down to stopping the run, winning the battle of the trenches, and executing the playbook.

Located in Garrett, IN (DeKalb County)

While The Gamenight and SummitCitySports crew had some suspicion that maybe Garrett might have a trick on their sleeve, I don’t think any of us expected them to completely STEAMROLL THE FALCONS. Yes, it was a 28-6 Garrett win, and folks the game was a much bigger blowout than the score would tell you.

The Big Train dominated the power run game, outrushing Fairfield 282-118 and 343-176 in total yards. In fact, Garrett beat them at their OWN game. They had the ball for over 16 more minutes than the Falcons (31:55-15:49). Add that to the fact Fairfield can’t really throw the football, plus dealing with injuries, plus Robert Koskie doing Robert Koskie things, and you have one of the best stories of the season for Garrett athletics this year.

Now, here comes the hard part: playing spoiler against the stingy Hornets. There’s no secret that Angola and Garrett are historic and heated rivals, regardless of sport. These two always have a knack for producing some heavy drama and some hard-nosed county football. They will have to find a way to pound the football against the NECC’s second-ranked rushing defense. The good news for Garrett is they have one of the conference’s best offensive lines when healthy to add to Garrett’s rejuvenated lunch pale mentality. It’s a matter of can the defense stop Tyler Call and Andre Tagliaferri? The numbers suggest it’s a tall task, but all it takes is one game.

Garrett feels like they just won a state championship right now, and you have to expect them to give Angola their best effort in front of their loud fans and that crazy atmosphere that loves to play some old-time Rock N Roll, 90s hip hop, and, yes, JUMP AROUND.

Located in Goshen, IN (Elkhart County)

If you think I was joking about falcons not having nine lives, then you’re sadly mistaken. Week 7 was a game they needed to get back in the win column to prove that their 4-0 start is not a fluke. Now, we are left with more questions than the Riddler’s mind games with Batman.

There is no denying Fairfield has a case of some kind of an injury bug. In the game against Garrett, there was no Ethan Schmucker and Ethan Hostetler just came back from a 2-game absence due to an injury. But what’s more alarming is the fact Fairfield is getting dominated in nearly every facet. In their last 3 games, Fairfield has been outplayed by their opponents 995-464 in total yards, and 807-362 on the ground. They’re averaging one turnover per game in their last three weeks. And when the games matter most, the defense is giving up 33.3 points per game in that span, which is why Fairfield is on the verge of going from First to Worst in their division.

Besides the fact Fairfield obviously has to figure out how to get back to pounding the football and playing better defense, I don’t know if there’s an easy answer to solve their issues. The Wishbone Triple-Option is only as good as the guys that are on the field. This is one of the hardest offenses to run. If they don’t execute the scheme well if they don’t tackle well, if they commit turnovers, and if they keep trailing early in games by double figures, this losing streak won’t end any time soon.

All of a sudden, that Lakeland game looks a whole lot bigger than just a division game. This is a game that may tell us the character and mental toughness of this football team. Look, I might sound harsh saying this, but right now this is not Fairfield football the way Matt Thacker envisions the program. They need to find a way to turn this ship around soon because Lakeland can silence the crowd faster than Dr. Doom’s plan of world domination with Brayden Holbrook at QB and Kham Malaivanh at running back. This feels like a must-win game beyond this week.