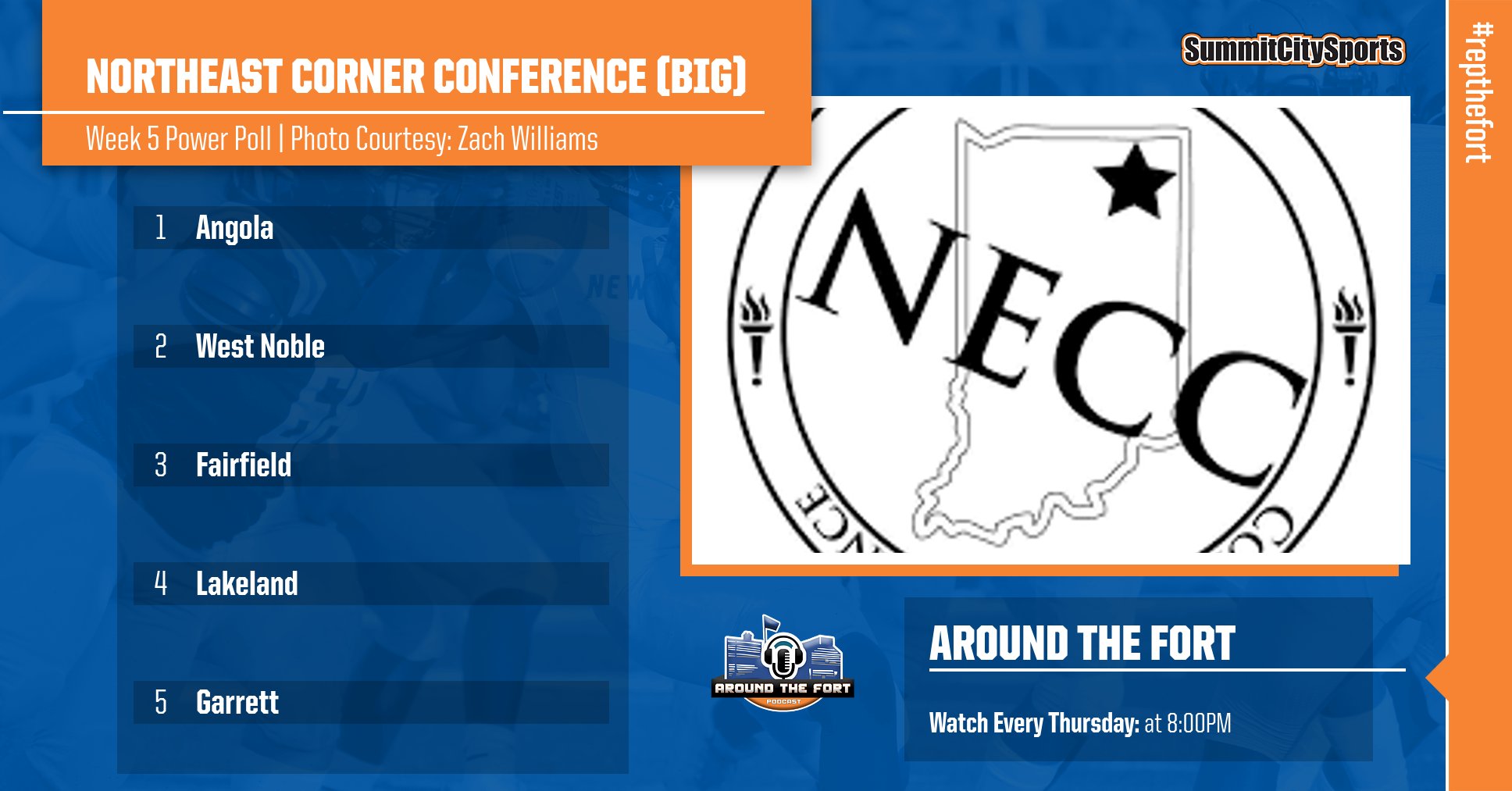 Who’s ready to talk about some old-school, county football? If the answer is yes, then the NECC is the place to be. We are now two weeks into NECC divisional play, and we are already in a situation where a share can be clinched this week. Angola will host Fairfield, where the Hornets can clinch a share of a Big School Division title. Today, I’m here to rank all 10 NECC schools through Week 5.

Located in Angola, IN (Steuben County)

The first change from my previous power rankings is Angola, who moves up a spot from last week after Fairfield lost to West Noble. The Hornets have found success through running the football, keeping the turnovers low, and playing strong defense.

Offensively, Angola’s Pistol Motion offense averages nearly 224 rushing yards a game led by their senior quarterback Tyler Call who has 560 yards with six touchdowns this season. So far this season, Tyler has answered the call! In addition to Andre Tagliaferri’s 193 rushing yards and four scores, he has 151 receiving yards and another three touchdowns. That is without mentioning tight end Lane King, who is starting to get some legit hype because he’s big and poised with and without the football, and that changes EVERYTHING about this offense.

Defensively, Angola hasn’t allowed 200 or more rushing yards in a game all season long. In the secondary, the duo of Ethan Miller and Braden Toigo has done their part to lead this unit to containing the deep ball against the most talented of quarterbacks. Jack Archbold and Jake Land are continuing to do their part to help out Andre Tagliaferri as defensive ends, and they are good at tackling guys.

Against this Fairfield team, the Hornets will have to slow down Matt Thacker’s Wishbone Triple-Option offense that averages 253 rushing yards per game. Fairfield’s had their number in recent memory averaging 298 rushing yards a game in their last two meetings and holding Angola to just 31 combined points. The Falcons will try to dominate time of possession and wear out the Angola defensive line. Will the Hornets be able to crack the code on this Falcons’ offense? We will find out soon enough.

Located in Ligonier, IN (Noble County)

I got to give West Noble some much deserved credit after my “Fairfield by 6” prediction leading up to last Friday’s game in Ligonier. After West Noble’s dominant 33-7 win over Highway 33 rival Fairfield, that makes it 2 straight years with a win against Fairfield. In response to their 26-7 loss at Angola, the Chargers responded in a huge way.

At Angola, the Chargers were dominated in the running game 230-158 to Angola. But against the Falcons, the Chargers Front 7 energized the home crowd by out-rushing Fairfield 306-166. At one point, Fairfield was held to just 65 yards of total offense (47 on the ground), which is unheard of since Fairfield predicates so much on pounding the football. In the NECC, if you can stop the run, you almost always win these “county football games”.

West Noble, who runs a relatively similar offense to Angola, averages 223 yards per game on the ground, led by Seth Pruitt (Yes, it’s another Pruitt stud) and quarterback Drew Yates with a combined 771 yards. Yates has also thrown for 380 yards on 50% completion. The defensive line for West Noble has been fantastic with a lot of great athletes and some tremendous size to that team led by Xavier Yates, Zach Beers, and Jordan Eash. The young kids are maturing quickly too, which only helps the future of the program.

West Noble gets a decently favorable matchup with a home game against winless Garrett, a team they beat in dramatic fashion last year on a Julio Macias field goal at the buzzer.

Located in Goshen, IN (Elkhart County)

Last week, I had Fairfield number 2 on my overall NECC power rankings. But the loss to West Noble has overlooked what had been a dominant start to their season. The last time they were held well below 200 yards other than Bishop Luers was last year’s game against Garrett where they ran for 158 yards despite the 16-7 win. Their 33 points allowed last Friday is the most in a regular season game since last season’s week 3 home game against Central Noble, where they allowed 35.

Fairfield’s backfield is one by committee led by Brecken Maran and his 390 rushing yards, and Carter Kitson’s 324 rushing yards (both combine for 6 touchdowns). The front 7 for Fairfield is an impressive one led by Brock Berkey and Dayton Lockwood, which Coach Thacker has praised both players greatly in the past.

However, Fairfield must be able to block well, pound the football efficiently, and play good defense because the Falcons have not been known to being successful in the passing game. Carter Kitson has completed just six passes on 28.6% completion. Kitson’s QBR is 32.3 as he is seen as a pure game manager on this wishbone offense.

Now, the Falcons must find a way to frustrate Tyler Call, and limit Angola’s offense to becoming more reliant on the passing game. The Hornets tend to only throw the ball at most 12-13 times a game. So, we will find out if Fairfield has a “get right game” in week 6.

Located in LaGrange, IN (LaGrange County)

Make no mistake, the Lakeland Lakers have a very bright future ahead in football with the rise of freshman Brayden Holbrook at quarterback. However, last Friday’s game against Angola shows how much the Lakers need to improve up front and on defense if they are primed for a strong finish to the season.

The Lakers were held to 150 yards on the ground, which is right around their season average of 156.6 yards per game. Senior Kham Malaivanh (ma-lay-von) is running for a NECC-leading 610 yards on 103 carries, which no other Laker has more than 7 carries. Eventually, I want to see some of the younger guys like junior Blake Alleshouse or sophomore Carson Mickem to start showing that growth in get a few more touches to utilize Kham’s versatility as a receiver on certain plays, but there’s no doubt Malaivanh is an animal.
As far as Holbrook’s concerned, he is still throwing for 548 yards on 59.7% completion, which only trails Brody Morgan of Central Noble. Holbrook likes throwing the ball to senior Owen Troyer on downfield passes, where Owen has 246 yards receiving, and that’s good for fourth most in the NECC among receiving yards. Given the matchup with CN, this game has the potential to be a shootout if both quarterbacks have a good night throwing the football. We have not seen the best from this Lakeland offense yet.

Located in Garrett, IN (DeKalb County)

Inexperience, especially on defense, has hurt Garrett’s start to the season, so far, given how strong their schedule has been to this point. Early on, I did not like the way Garrett responded to adversity against Adams Central, but each game you are seeing Garrett slowly improving with every snap. Despite abrupt change at quarterback, sophomore Calder Hefty has been decent as the shot caller throwing for 483 yards on 53.5% completion, where he has built good chemistry with junior wide receiver Luke Holcomb.

In the backfield, senior Robert Koskie has been one of the area’s most underrated running backs with 299 rushing yards, but he ran for 110 yards on 8 carries against Eastside last Friday. Where Garrett still has a lot of growing pains is on the defensive side of the football, which Garrett is allowing 342.5 yards of total offense per game in just the last four games alone.

I think it is important to note that Garrett experienced the most turnover from their front 7 and in the secondary. For example, Jaxon Gould is on the Saint Francis football team as a depth offensive tackle, and Trey Richards, who was a key part of Garrett’s secondary, is now at Trine. How will Garrett match with the size and speed of the West Noble linemen and running backs? That is something I am curious to see.