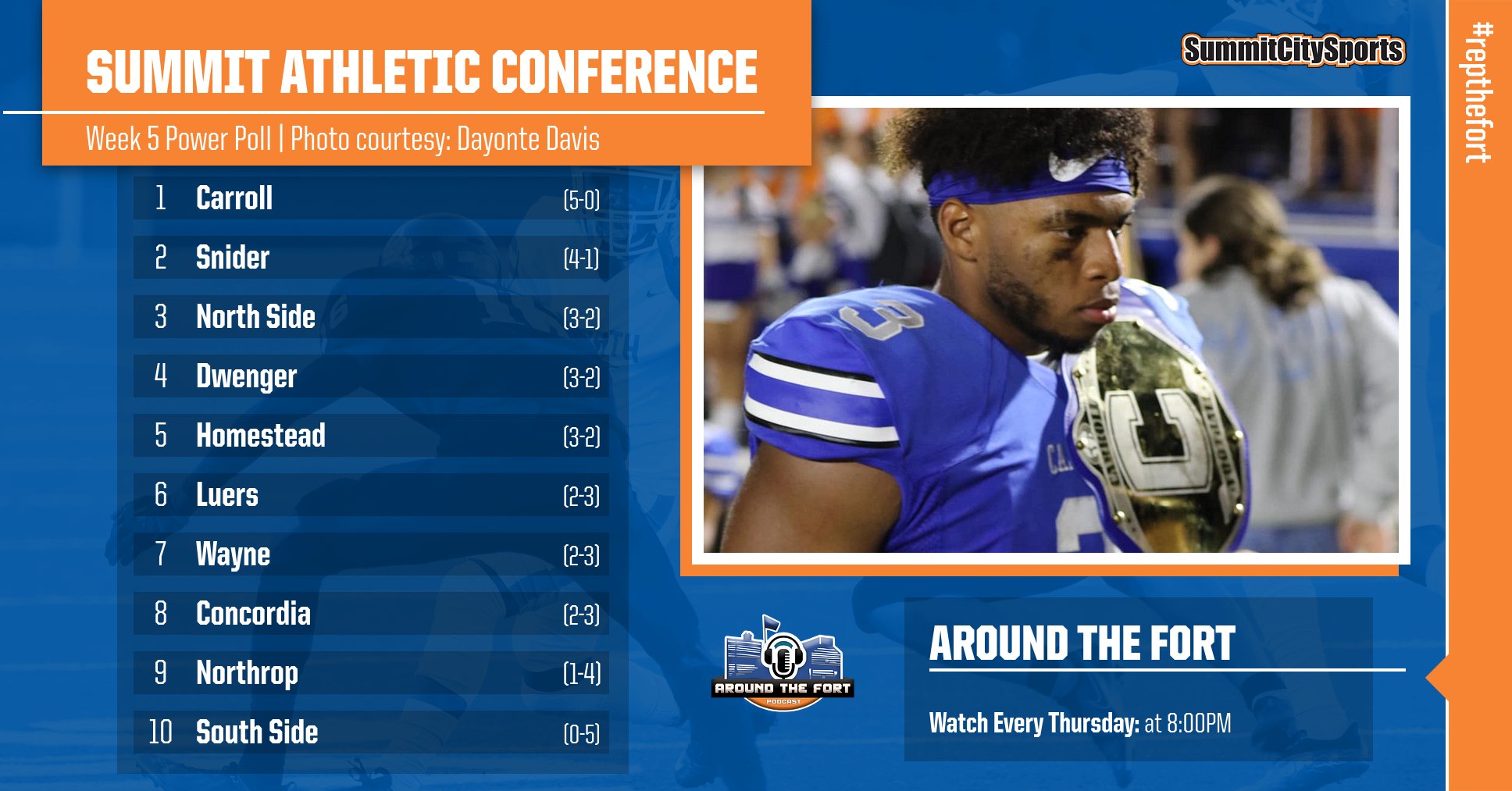 Week 6: vs South Side

This Chargers squad now has their first 5-0 start since 2014 which ended up as an unbeaten season. With the Chargers’ dominance through these first 5 games, it is very likely that this will also be an unbeaten season. Even if the Chargers slip up once in the last 4 weeks they are still already set up with at least a share of the SAC title. In the game against Dwenger, the Chargers once again looked absolutely unstoppable with both the run game and the passing game working all night. Quarterback Jimmy Sullivan threw for 204 yards and a touchdown while also rushing for 24 yards and a touchdown. Braden Steely and Nate Starks also were dominant on the ground for the Chargers putting up a combined 196 yards and three touchdowns. Defensively the Chargers showed why they truly can compete against anyone in the state this season. The Chargers got 19 TFLs, 3 sacks, and 4 interceptions on the night. 3 of those interceptions came from Senior cornerback Michael Dierckman. As the season moves along this Chargers team has just become more and more dominant and will be looking to close out this SAC season these next four weeks starting off with South Side in week 6.

All the way from the preseason to every week since I have had Carroll and Snider as 1a and 1b in this conference and in week five they proved that. With two of the top programs in the SAC just not being able to compete with Snider and Carroll this week proves just how dominant both of these teams are. For the Panthers, it was the offensive side of the ball that just completely ran away with this one just looking completely unstoppable all night long. In the first half, it was the passing attack working for the Panthers as Luke Haupert connected with Jordan Lee for two touchdowns while also connecting with Kamari Juarez for a 96-yard touchdown. Then to open up the 2nd half Uriah Buchanan took the first play of the half 80 yards to the endzone to take a 35-14 lead over Homestead. That touchdown was one of three on the night for Buchanan. The defense also played well as Zyon Greene, Lukas Rohrbacher, and Amarrion Moore flew around the field all night making big plays. This Panthers squad has now 133-21 over the past three weeks and will look to carry that dominance into week 6 when they play against Wayne.

This is a Legends squad that has had high expectations all season long as they look for their first season over .500 since 2013. After a 1-2 start some questions were raised on whether or not they would be able to do it this season and these past two weeks the Legends have proven they are capable. You also have two recognize that the Legends may have had possibly the most difficult three-game start to the season as their two losses came from the two teams currently at the top of the conference; the Carroll Chargers and the Snider Panthers. They have now won their last two games on a combined score of 87-32. In those two games, Jontae Lambert has played absolutely phenomenal rushing for an average of 257 yards a game and a total of 5 touchdowns. Brauntae Johnson also made big plays this past week as he got 104 receiving yards on just 5 catches. The defense has also made some big plays including 4 sacks last week as Brashawn Bassett, Brandon Jenkins, Tayoung Holley, and Davon Haney each got one. Next week the Legends look to knock off the Homestead Spartans for the first time in school history.

After getting the big win in week 4 over the second to last unbeaten the Homestead Spartans, the Saints could not do it again in week 5 as they fell to the unbeaten Chargers. The next couple of weeks the Saints will look to rebound as they are set to play Concordia and then Bishop Luers.

Week 6: vs North Side

In week 5 the Panthers’ powerful offense was just too much for the Homestead Spartans. Even though the game did not go the way the Spartans wanted it to, there still were some bright spots. Such as quarterback Peyton Slaven looked sharp as he completed 15 out of 22 pass attempts for 157 yards and 2 touchdowns with his lone interception taking place on a hail-mary attempt at the end of the first half. Kam Johnson also was a bright spot for the Spartans as he broke out for a 39-yard rushing TD. Next week the midseason gauntlet continues for the Spartans as they face off against the North Side Legends.

The Knights battled against North Side early on but the Legends’ offensive attack ended up being too much for Bishop Luers. One standout performance from week 5 for this team was Nick Thompson who got 4 receptions for 156 yards and a touchdown while also getting 5 tackles on the defensive side of the ball. One area that struggled this week was the run game which the Knights will look to improve upon next week against Northrop.

Lamarion Nelson and the Generals’ offensive line had an outstanding performance in week 5. Nelson finished the night with 427 yards and 7 touchdowns while averaging 14.2 yards a carry. And this dominant run game has been the story all year for the Generals as Nelson now has over a thousand yards on the season just 5 weeks into the year. The passing game also found the endzone for the Generals as Christian Trimble connected with Deonte Williams for a touchdown. As for Nelson he was not only elite in the run game but also made big plays defensively getting 7 tackles, 1.5 TFLs, and 2 pass breakups. Victur Doughty also made big plays for the Generals including an interception. Next week the Generals take on the difficult task of the Snider Panthers.

The Cadets were able to get the big overtime win over the Bruins thanks to an overtime touchdown connection between Eli Mattox and Ajani Washington. Then to close it out on 4th and goal Evan Stipp came up with the huge pass break up to seal the Cadet victory. Tim Okeowo played great for the Cadet run game as he rushed for 142 yards on 26 carries helping lead this team to a win. Next week the Cadets look to carry this momentum into a game at Bishop Dwenger.

The Bruins were on the wrong side of an overtime thriller last week as Concordia was able to win in overtime. In the 1st quarter of this game, the Bruins showed their potential to throw it deep as Keone Bates connected with Matt Morgan for a 59 yard touchdown. Then for the 2nd touchdown of the night it was the Bruins offensive line powering forward allowing for a Bates rushing touchdown. Next week the Bruins will look to bounce back from this close loss in a game against Bishop Luers.

The Archers showed some potential to put up some points in this ball game even though the result is not what the Archers wanted last week. Larrenz Tabron threw for three touchdowns this past week including two to Jayden Morris and one to Omarion Washington. Jeremy Irby also found the endzone on the ground for the Archers. Next week the Archers will face off against the Carroll Chargers as they still look for their first win of the year.