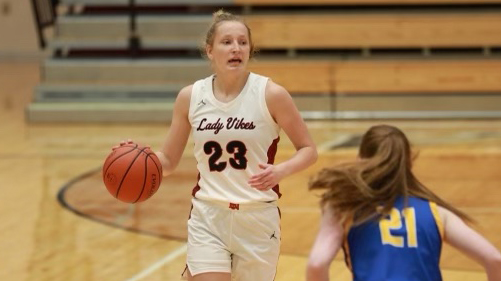 For the first time this season, we now have seen every NE8 team play at least two games into this young girls’ basketball. Some of the games we have seen have been as I expected, but there are still moments where I am still figuring them out. That is the unique angle about this NE8 girls’ basketball season.

Columbia City dominated their competition last week outscoring their opponents 135-44 (West Noble & Whitko). Norwell once again cruised to dominant wins over Mississinewa and Angola. Bellmont and Huntington North opened many eyes with their impressive wins. The Braves knocked off previously unbeaten Woodlan team 46-36 in route of a 3-0 start. Huntington North rallied from a 30-19 halftime deficit to beat Snider of all teams 48-42, AND dominated Carmel 45-34 four days later.

DeKalb is unbeaten no more thanks to a heartbreaking loss to Angola last Friday, and Leo is off to their best start in 6 years at 4-1. Finally, New Haven ended a 24-game losing streak against Canterbury, thanks in part to junior Janiya Johnson and a freshman-heavy nucleus filled with some talent.

SuperSam’s 5 NE8 Picks of the Week

The last time these two teams met, Huntington North only lost by four points 41-37. Carroll showed signs of dominance, as well as some grit in their two wins over Columbia City and Angola. Now they will look to gain that momentum into this week as they start to get into the meat of SAC play.

Do you hear that sound? It’s Taylor Double’s entrance! Prepare for trouble and make it double! Was Snider threatening to avenge their loss from last year? They very much were, but that did not stop Double from icing the game to the Vikings’ favor. While Marissa Trout led the team with 14 points that night, Double had a double-double with 13 points and 11 boards, including a three-pointer that gave HN the lead for good in a 48-42 HN win.

Against Carmel, Double had the best scoring game of her career as she made 26 points against a battle-tested Carmel team. Matt Hinds’ staff know that they have to test their kids for the grind of a tough NE8 race. After this game, they have a date with rival Homestead a week from tonight, followed by their NE8 opener against Norwell on Dec. 2. Can Huntington North continue to find ways to win big games? Tonight, can HN find a way to contain the trio of Taylor Fordyce, Jersey Paul, and Kayla Gibbs? Each one will feel like a playoff game to them.

This is the game of the night in the 260 as they two teams have a knack for classic matchups and great basketball entertainment for us fans. Last year saw Columbia City prevail to an impressive 55-48 win at C. City led by the stellar greatness of Chef Addison Baxter and the toughness of Molly Baker inside.

The Eagles are starting to get more contributions from their lesser-known names like Tessa Tonkel and Faith Frey. But the Eagles know defense will be their key to beating the best of the best in the state. Snider is considered to be one of the 260’s main contenders led by the junior sensation Jordyn Poole and her 15.8 points. The question becomes can other players like Nae Nae Donahue find their offensive finish against a good Columbia City team?

If you like lethal shooting and an excellent 1-3-1 defense, Norwell’s your team to watch this season. Norwell is dominating opposing teams averaging 70 points and winning by an average margin of a whopping 32.3 points per game. The Northern Well’s Splash Sisters of Kennedy Fuelling and Makenzie Fuess is a sight to behold as they average a combined 37 points per game as a team, and so far, these two are finding their mid-season form and leading the way for the young kids that are contributing to big roles.

Homestead is a measuring stick game to see where Norwell stands with the state’s elite competition that will help them for conference play and beyond. Homestead has a strong senior class led by Ali Stephens, but the freshmen there have serious talent led by Myah Epps.

This Bellmont-Jay County matchup has the makings for a chaotic and entertaining basketball game down in Portland, IN. Bellmont plays excellent team basketball that attacks the paint hard and with consistency, while maintaining responsibility on defense. The offense has come with a balanced attack led by the ultimate slasher on this team in Sydney Keane who’s averaging 16 points per game. This man-to-man defense will have to find the answer that Hamilton Heights was able to solve against the future Lady Mastodon in Renna Schwieterman.

Renna is already coming off a game @ South Side where she had 27 points, 5 assists, and 4 boards in a convincing 34-point win. But life wasn’t easy at all for her and her squad as she was held to 9 points, 6 boards, and 5 assists in the 45-44 OT loss to the Lady Huskies. Jay County will need a huge game from Schwieterman, but also some contribution from other role players such as Senior Gabi Bilbrey who had 12 points and 5 boards against Hamilton Heights.

Bellmont’s defense has had Renna’s number in her career as she’s been held to 9 points per game in the 3 games she’s faced the Lady Braves.

This is the Battle of East Allen County Schools as 2-1 Woodlan faces 4-1 Leo. The last 2 meetings have seen both games going down the wire, and while Woodlan has won their last four meetings, Leo is starting to show some fight against their rivals after some down years.

Both teams play tight, hardnosed defense, led by two coaches that understand what it takes to build an identity of teamwork and tough defense. Woodlan Head Coach Gary Cobb has coached 4 decades of basketball in some shape or form, and he’s calling it a career following this season. He looks to see how his competitive team will respond following a disappointing loss at the Bellmont Teepee. Leo Head Coach Carrie Shappell has guided this program through the recent struggles, and it seems like an indicative that success is coming back to Leo Girls’ basketball.

The Lion’s Den will be a difficult task as the Lion faithful is seeing the pieces round into some form with their best start in 6 years. Now can this start be sustainable as they get into December where NE8 action gets underway? A few more quality wins would do wonders before they have to worry about Columbia City in a couple weeks. The big key notes with this matchup are DEFENSE, DISCIPLINE, and SHARING THE BALL. If they can do all three things, they have a chance to win this game. This could go either way.