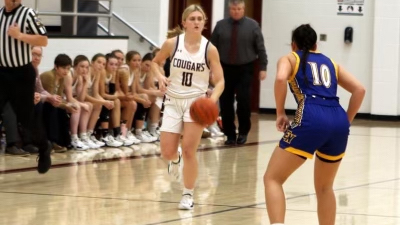 The NECC has reached two weeks of girls’ basketball, and this week will be one we start to see more teams playing conference games. Fairfield and Central Noble are 4-0 to start their seasons thanks in part to their star players leading the way and playing strong defense. S/O to Brea Garber on becoming the 4th Fairfield Lady Falcon to reach 1,000 career points. Central Noble is 4-0 for the first time since their run to semistate in 2018-19, and they are holding opponents below 30 points a game so far this season.

Angola kicked off their season with a challenging three games, but Angola took down 3-0 DeKalb on a late basket by Kylie Caswell. Garrett remains winless but played competitive basketball in a 55-42 loss to Northridge. Eastside is quietly the other team remaining undefeated from the NECC after their 47-23 win over Fremont.

Now, let’s take a look at my 5 Picks of the week from the NECC.

SuperSam’s 5 NECC Picks of the Week

An interesting matchup between two undefeated teams at the Jungle. Bethany’s off to a 3-0 start, but their wins came against teams with a combined record of 2-7. If Bethany has a chance to stop a undefeated CN season, Mariah Stoltzfus and Zoe Willems will need to have monster games. Central Noble is getting balanced contributions from Grace Swank, Kyleigh Egolf, Avery Deter, Abby Hile, and many others while still allowing Madison Vice and Meghan Kiebel to be (Well) Madison Vice and Meghan Kiebel. The two girls are combining for averages of 34 points, 10.1 boards, 6.8 assists, 7.6 steals, and 0.3 blocks per game. That’s the type of duo that ranks them as one of the best in the entire 260. Rebounding and staying out of foul trouble will be crucial in this game.

Eastside is building off the momentum from last year’s postseason as their 2-0 start has seen them winning by an average margin of 18 points led by Grace Kreischer and Paige Traxler combing for 31.5 points per game. Kreischer will be essential here because of her value in rebounds and on defense. She’s a versatile defender that can play all across the court.

However, this will be Eastside’s first true test as Leo averages 30.2 boards and 2.6 blocks per game. Leah May is an excellent athlete of her own averaging 13.6 points, 3.8 boards, and 1.4 steals per game. Senior Haylee Schott is their primary shutdown defender in the middle averaging 5.4 points, but also 7.2 boards, 2.8 steals, and 0.6 blocks per game.

Leo’s only setback came in a 50-point loss to Northrop. This game could be one that comes down to the last possession and possibly FT’s. That’s already happened with Leo when they played Wayne in the Lions’ 43-42 win.

An interesting matchup between two small-school programs slowly on the rise. Westview and their scrappy defense-first program vs the resilient and tough Lakewood Park squad. Westview nearly pulled away an impressive win over Wawasee, as they lost 35-32. Hope Bortner and Sara Lapp continue to lead the way on both ends of the floor, but suddenly freshman Mykayla Mast is becoming a fixture to this Westview nucleus in just a handful of games.

This one really comes down to who can make the biggest play, and who can play better defense.

Since Mike Lortie and Nick Burlingame became head coaches for their respective programs, defense has been the calling card for these games. While Angola has not lost to Eastside since the late 90s, the recent matchups have been very competitive between these two teams. Eastside will definitely play that “mucky ball” defense, but it will be the way they utilize their possessions that will determine the outcome of games.

For Angola, it does look like some improvement is made for sure. However, the growing pains from a brutal November schedule suggests that the trend of slow starts may continue once again. The efforts are there, and we are now starting to see chemistry between Macy Oberlin, Kylie Caswell, and Leah Snyder. But with the graduation of Lauren Leach and a knee injury for Lexi Stillman, the offense still has issues putting it all together right now.

Perhaps this is the week it gets back on track, but Eastside is not a pushover by any stretch. Can Angola’s press/1-2-2 trap continue to suffocate Eastside’s size? How will the offense respond to NECC competiton?

This is now three straight seasons where Fairfield starts a season 4-0. Following their 47-18 win over rival Goshen, the Falcons are showcasing their midseason form with the play of Bailey Willard, Eva Herbert (freshman), Natalie Whitaker (transfer out of Constantine, MI) who had 16 points against Goshen, and the newest 1,000-point scorer Brea Garber. Brea’s parents also reached 1,000-point scorers as Falcon players.

Their biggest test to this point will be a trip to Columbia City to face a very talented Eagles team, whose pace and elite guard play will challenge the length and toughness of Fairfield. Fairfield’s bench will be tested in this game with the way the Eagles are defensively and the way they get out in transition. Fairfield must contain their shooters in that game.