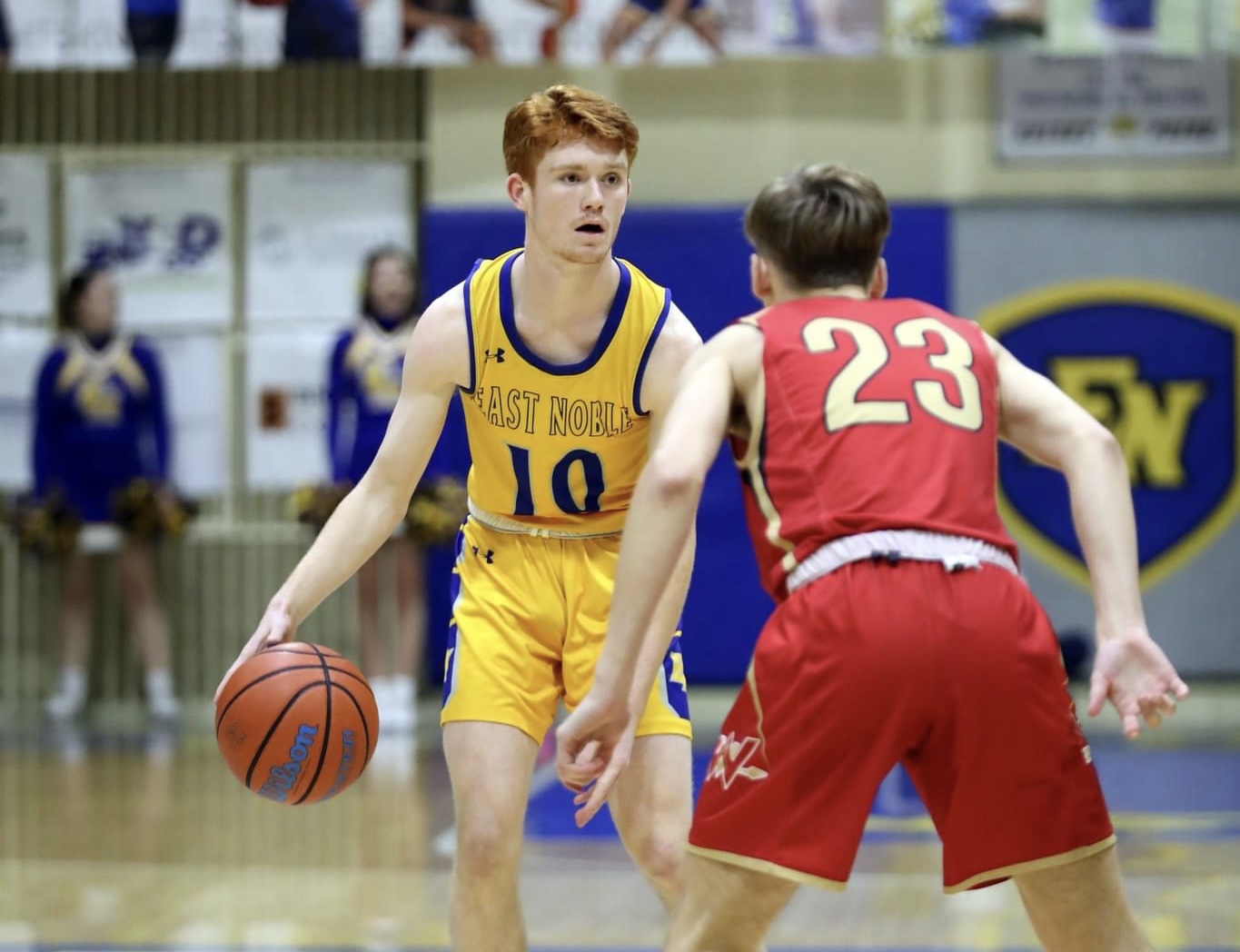 This past week saw the Leo Lions taking Norwell to their limits before Norwell rallied to win on the road 59-51 thanks to Jake Parker’s 17 points. Freshman Nolan Hiteshew had a career-high 21 points against Norwell.

Huntington North went into Kendallville and edge the East Noble Knights in a hard-fought 50-48 win. In Decatur, Columbia City used a strong third quarter rally to erase a 10-point deficit and beat the Braves 49-45. Led by another double-double for Darrion Brooks (20 points and 19 rebounds), the New Haven Bulldogs dominate DeKalb on the road 54-40.

This week has some very interesting matchups that will give NE8 fans some excitement for these upcoming games.

This is arguably one of the best games in the 260 this week where a talented Wayne squad hopes to knock off the defending NE8 champion Norwell Knights at the Castle. Wayne is coming off two straight close losses at North Side and Indianapolis Arsenal Tech.

Against ‘We the North’, Wayne had four players reaching double-figures led by Chase Barnes’ 18 points. Against Arsenal Tech, Jevon Lewis had one of his better games with 21 points and 4 dimes. Wayne by far shot the ball better (53% FG and 56% from 3), and they had a +10-rebound differential. But Wayne only recorded 6 assists and missed 7 of their 13 FT’s.

With this game, Wayne will need to take a few pages off the Leo film and try to contain Norwell’s athleticism. Luke McBride averages a NE8 best 23 points per game, but he was held to 16 @ Leo. Lleyton Bailey is one of the more consistent all-around point guards in the 260, and Jake Parker and Brody Bolyn are two tough cookies. This Norwell team is scary good, and tonight we will get to see some amazing on display.

This is probably not the most exciting matchup on paper for the NE8 this season, but these two schools don’t care about that. This is still regarded as one of the best rivalries in the history of the NHC/NE8. These two schools don’t like each other, and it is a rivalry that dates back to 1967 when DeKalb High School opened its doors for the very first time.

Consistency has been an issue for East Noble, where they have shown portions of turning their season around. 4 of their 10 losses have come by 10 points or fewer, which includes an 81-76 3OT loss at Columbia City.

For DeKalb, this winless streak is unprecedented, which is something that hasn’t happened at DeKalb since the 1970-71 season. And trust me, Barons fans know this isn’t good history to be a part of. What was once a rivalry that exceeded Homestead-Carroll in the late 80s and early 90s has suddenly become a rivalry between two rebuilding teams.

The Eagles picked up a crucial road win last Saturday at the Bellmont Teepee where Andrew Hedrick’s 15 crucial points. Speaking of Hedrick, he is closing in on 1,000 points as he currently has 940 career points. On the season, Hedrick is averaging 20.9 points, 2nd most in the conference.

Stratton Fuller and Kam Hoag are capable offensive distributors as they combine for roughly 25 points a game. Rhett Wilson has had some big performances, mainly on defense. But they are definitely missing some secondary scoring, which is partially why they struggled in the Phil Cox Invitational in Kokomo.

The key aspect of Columbia City’s success lies within their identity of rebounding and playing selfless basketball. They will have to win at a tough gym in Huntington, IN. Teagle Ball has been widely known as one the area’s stingiest defenses, and one of the most fundamentally sounded teams.

Over their last seven games, the Vikings are 3-4, with four of their games coming by single digits. In the win @ East Noble, three Vikings reached double figures, led by senior Levi McElhaney with 14 points, 7 rebounds, and an assist. Aric Hosler is a solid all-around guard for the Vikings. If you want offense, this is the wrong game to be in, but if you want defense, this is the right game to be in.

No matter how you slice it, a Bellmont-Norwell basketball game is a whale of an experience by itself. It is an intense rivalry that spans decades of big-time basketball and memorable postseason games. Bellmont’s defensive philosophy always feels like they have a chance in doing something special every game.

Here’s the thing that is shocking when talking about Bellmont: DJ Kitson is shooting 65% from the floor, which is amazing for the role he plays as a defense-first player. However, if Bellmont is going to compete in this game, they have got to slow down Norwell’s high-tempo offense and their lethal perimeter shooting.

Luke McBride, Lleyton and Cohen Bailey, Jake Parker, Brody Bolyn, Luke Graft, Jon Colbert, Ashton Federspiel, and Gavin Hoeppner. That is a boat load of talent that is difficult to slow down when firing at all cylinders.

Bellmont knows they must have a good night shooting the ball and limit the turnovers to prevent Norwell’s transition game from being the difference maker Friday night.

This is the game of the week for NE8 Boys’ basketball as one of the conference’s best rivalries take place at Armstrong Arena. Two EACS rivals: Leo and New Haven.

Leo is coming off an encouraging week Leo played some of their best ball of the season, despite having to play the Norwell game without Jackson McGee. Trey Hiteshew’s 25 points and a strong game from Sol Richard led Leo to a 57-44 win at Canterbury. Nolan Hiteshew gave Leo life and momentum where the Lions had a chance to put away Norwell.

For New Haven, they are starting to round into postseason form following double-digit wins over Snider and DeKalb. Senior Darrion Brooks, who is now a part of the 1,000-point club, is averaging 19.8 points, 9.5 rebounds, 3.5 assists, 2.5 steals and a block per game.

In his last 3 games, freshman Korbyn Hammel is averaging 9.3 points per game. Jeremiah Cottrell is second on the team in scoring averaging 8.5 points per game. This is a New Haven team that when they have balanced offensive flow, they can compete with anyone out there. This is an excellent test to see how both teams measure up to the competition.