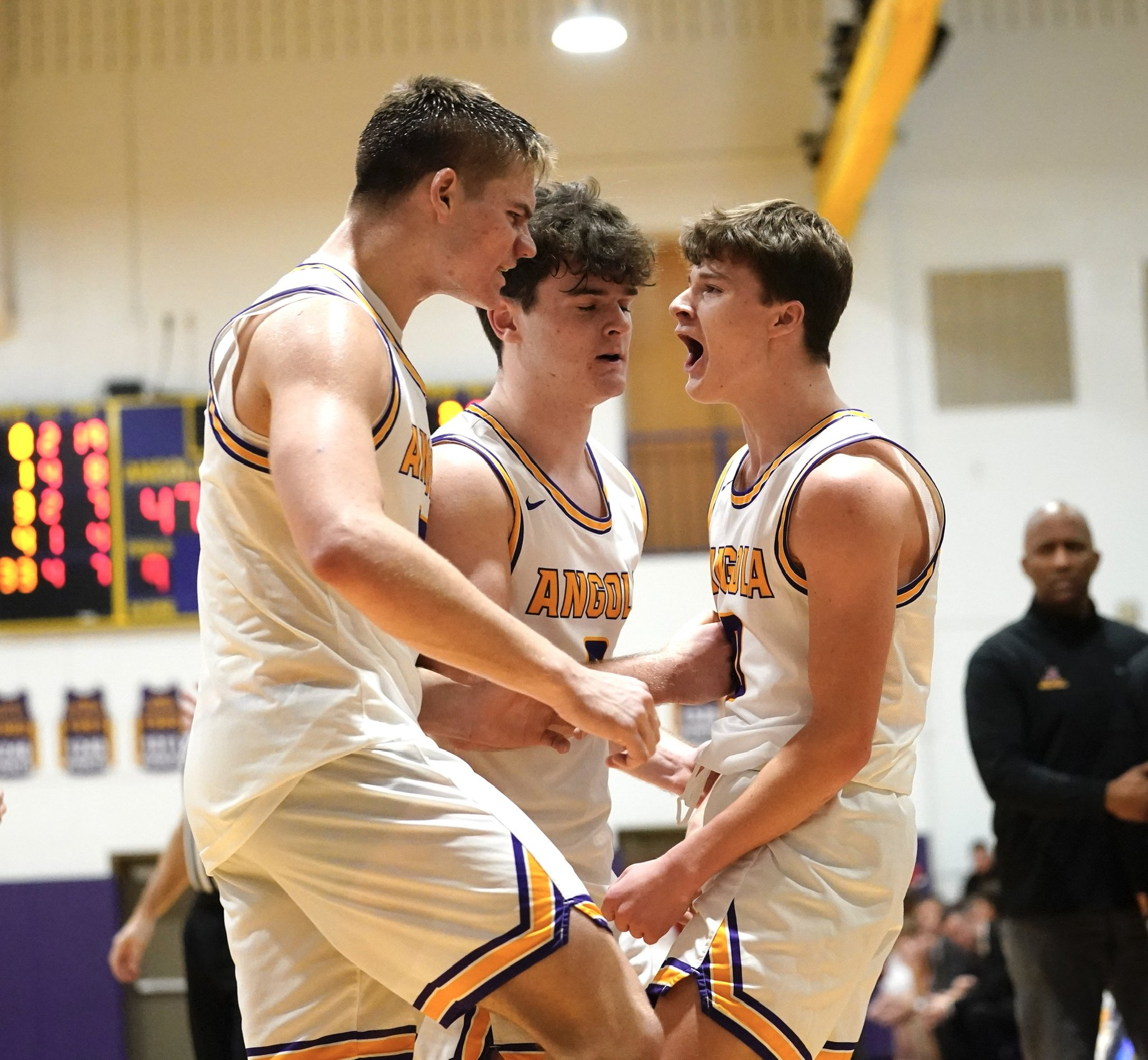 The last three tournaments have been won by the Central Noble Cougars during the Connor Essegian era. Despite not winning the regular season title, CN won the tournament title for the third straight season on their way to a 28-2 2021-22 season and a trip to the 2A state championship game.

Will CN successfully reach a 4-Peat or will there be a new champion this time around? With that, here’s a look at the tournament bracket and a brief history of the tournament itself. Keep in mind that home court advantage for this tournament will be determined by the girls’ bracket for the boys teams. Garrett will host the championship games.

Much like the girls’ game, this looks like a one-sided game on paper. Since the post Chris Paul era, Busco has struggled to transition out of it as they are currently 4-27 since. Busco fields one of the youngest teams in the area posting the NECC’s second worst offense (40.8) and by far the conference’s worst defense (68.8).

Of the players Busco has beyond this season, Brayden Bianski and Cade Ummel have some offensive potential combining for 16.7 points per game. The clear challenge is: can Busco defend this gritty Eastside team? I have my doubts, but who knows.

Eastside under Ed Bentley has definitely struggled to rekindle that magic they had a year ago going 25-2. That being said, it is understandable considering they had to replace eight players. This year’s starting five is almost completely different from last year (Santino Brewer is the lone returning starter).

Eastside actually scores the fewest points in the NECC averaging 37.1 points per game. Defensively, Eastside is playing solid basketball as they only allow 46.3 points per game (5th in conference). However, by Bentley Ball standards, that is seen as a down season for his team.

The biggest question mark with Eastside seems to be finding overall team consistency, especially on offense, that obviously stems from having to replace eight players from a year ago. They have an excellent chance of winning this game, but a deep run will require some nostalgia Bentley Ball defense this week.

Eastside: Team Cohesion and Taking Care of the Basketball

This applies with the same explanation as the girls’ bracket, so I’ll just let you go to the girls’ tournament preview if you want that explanation. Realistically, Lakeland should win this game, but it is worth noting how their season has gone for the Lakers. Lakeland has the third best offense in the NECC (60 points) and a decent 56.9 points against.

At this time last season, Lakeland only won 5 games in total. This season marks Lakeland’s best season in six seasons, and it comes during Ben Keil’s senior season and Nate Keil’s junior season. Under Head Coach Chris Keil, the Keil brothers have been outstanding this season combining for 30.2 points, 12.2 rebounds, 7 assists, 2.9 steals, and 1.3 blocks per game. Both players shoot well over 40% from the field and over 70% from the free-throw line.

Christian Troyer is having a nice senior season of his own averaging 9.7 points, 3.8 rebounds, and 2.1 assists. Seniors Tommy Curtis and Zeke Wachtman have been solid defensively with some toughness. However, where Lakeland’s situation is unique is the number of freshmen that are already gaining some varsity experience.

Kyle Hartsough, Keegan Merrifield, Levi Cook, and Keyan Arroyo have all played varsity basketball in some shape or form. While Lakeland is happy about their start, there is room for improvement. Their half of the bracket is wide open, so they know they have a shot to at least get to the title game.

Lakeland: Consistently make shots and getting some stops on defense (Lakeland is 6-0 when they shoot 40% or better from the floor)

This is a rematch from their Dec. 2 meeting where the Panthers rallied to beat the Falcons 53-48. This Prairie Heights team has found success based on total commitment to team basketball and a tough-nosed man-to-man defense. The Panthers average a solid 53.3 points per game (5th in the NECC) and holds the conference’s best defense (40.3).

When it comes to the marquee players, the Panthers’ championship aspirations center around the greatness of seniors Chase Bachelor and Isaiah Malone and team defense. Bachelor (who reached 1,000 points in Angola) and Malone combine for 30.2 points, 13.2 rebounds, 8.9 assists, 2.5 steals, and 4.8 blocks per game. Senior Leyton Byler is a solid point guard for this team averaging 3.7 points, 3.9 assists, and 2.8 steals, while shooting 50% from the floor, and 46% from three.

For Fairfield, this is a battle-tested group that limits opponents to 53.8 points, despite posting the fourth fewest points offensively (46.4 points). The Falcons are a team-by-committee with not a lot of big-time names, but they do have solid athletes on this team.

When watching Fairfield, their strength lies in their frontcourt where the likes of junior Noah Mast, junior Tyson Frey, and senior Dayton Lockwood making this one of the conference’s best frontcourts. Senior Seth Yoder and junior Alex Hofer have been their key players at the guard slots.

One player to keep an eye on in the future is freshman Brant Garber, who is finding himself into playing some varsity basketball this season. If Fairfield can contain Bachelor and Malone, they will have a shot to at least advance to the next round.

Fairfield: Finding some offense from beyond the three-point arc

This is one of the few times that a matchup would have two teams playing each other for a third time this season. In their first meeting back on Dec. 6, Fremont won 67-55 at Garrett. But in their last meeting on Dec. 27 at East Noble, Garrett pulled off the upset 60-45.

It has been a wild start for Fremont as they have come away with impressive wins over teams like Wayne. However, they have had some questionable losses, including that loss to Garrett. This Fremont team holds the NECC’s number one ranked offense at 62 points per game. While they do allow 56. 9 points per game (2nd worst defense in the conference), it is not bad when considering Josh Stuckey’s offensive scheme.

However, Fremont’s biggest questions are their overall consistency and taking care of the basketball as both areas have hindered their potential. In a tournament-setting, I am not sure they are quite ready for that type of competition right now.

For Garrett, their success depends on how well Kyle Smith plays, because this is a very young roster. Parker Reed and Tyler Gater are respectable players on this team. Garrett does field a solid defense (50.7 points against).

Much like the girls’ tournament, the last two given matchups are second-round games as these four teams drew a bye into Wednesday’s slate of games. This is a rematch from their Dec. 2 meeting, where CN won 45-38. Angola is the site of what could be a solid basketball game where the Hornets hope to knock off the three-time defending conference tournament champions.

Speaking of the three-time defending champions, the Central Noble Cougars have built a reputation as a team that is best suited for this type of basketball: the playoffs. Since 2020, Central Noble has won four combined NECC titles, and went to the state finals last season.

Of course, this season’s team has had to learn how to sustain excellence in the post-Connor Essegian era. This year has seen juniors Isaiah Gard, Drew Pliett, Jackson Andrews, and Sam Essegian to lead the way for the Cougars. Gard and Pliett both average around 10-11 points per game, while Andrews, Essegian, and senior Conner Lemmon (Manchester Commit) hover around 6-7 points per game.

Statistically, the Cougars are still capable of at least getting to the championship game. But if the Cougars can find consistency on offense, that will go a long way. A wild card player to watch in this tournament is sophomore Redick Zolman.

Both teams field the NECC’s third and fourth-ranked defenses allowing just 45 points. However, if Angola is going to pull off a massive upset, their offense will need to step up. Their 48.2 points per game ranks them in the bottom five of the conference in offense.

CN: Secondary Scoring and Taking Care of the Basketball

Angola: Finding Success from the Perimeter

I saved the best given matchup for last as the team with the most tournament titles ever (Westview) travels to Ligonier to face the consensus preseason favorite to win the NECC (West Noble). The way West Noble is playing this season, it makes it incredibly difficult to find a team that can truly knock off the Chargers at this point of the season.

However, I’ve seen this conference enough to know NO ONE should ever underestimate the potential of Westview Warrior basketball. Westview under Chandler Prible is generating the fourth most points in the NECC (58.1 points) and allowing a solid 53.4 points per game. Despite fielding the conference’s smallest team, this team is dangerous to play against.

Senior Brady Yoder, who is sitting at 924 career points, is having the best season of his career at 20.2 points per game. Junior Wiley Minix has been Westview’s complimentary shooter averaging 12.6 points per game. Luke Helmuth generates a solid 7.9 points per game as their energy player. Wade Springer, Jethro Hostetler, and Wade Springer give Westview some sandpaper and shooting.

West Noble is arguably the most complete team in the conference averaging the NECC’s second-best offense (60.3) and defense (43.1). Austin Cripe, who is West Noble’s new program scoring leader with 1,369 points, is averaging 20.5 points per game and already has two triple-doubles. Cripe is committed to Bethel College to play basketball after high school.

West Noble is complimented by their junior center in Bradyn Barth, who is averaging 16.8 points. This is a senior-heavy roster led by Luke Schermerhorn, Nevin Phares, Ayden Zavala, and Derek Slone.

West Noble’s zone-press combined with their dangerous motion offense gives a team a sense of identity. This is why the Chargers have their best chance since 2014 to win some conference hardware.

These two teams will meet on Feb. 2 @ West Noble.

Westview: Competing in the Glass