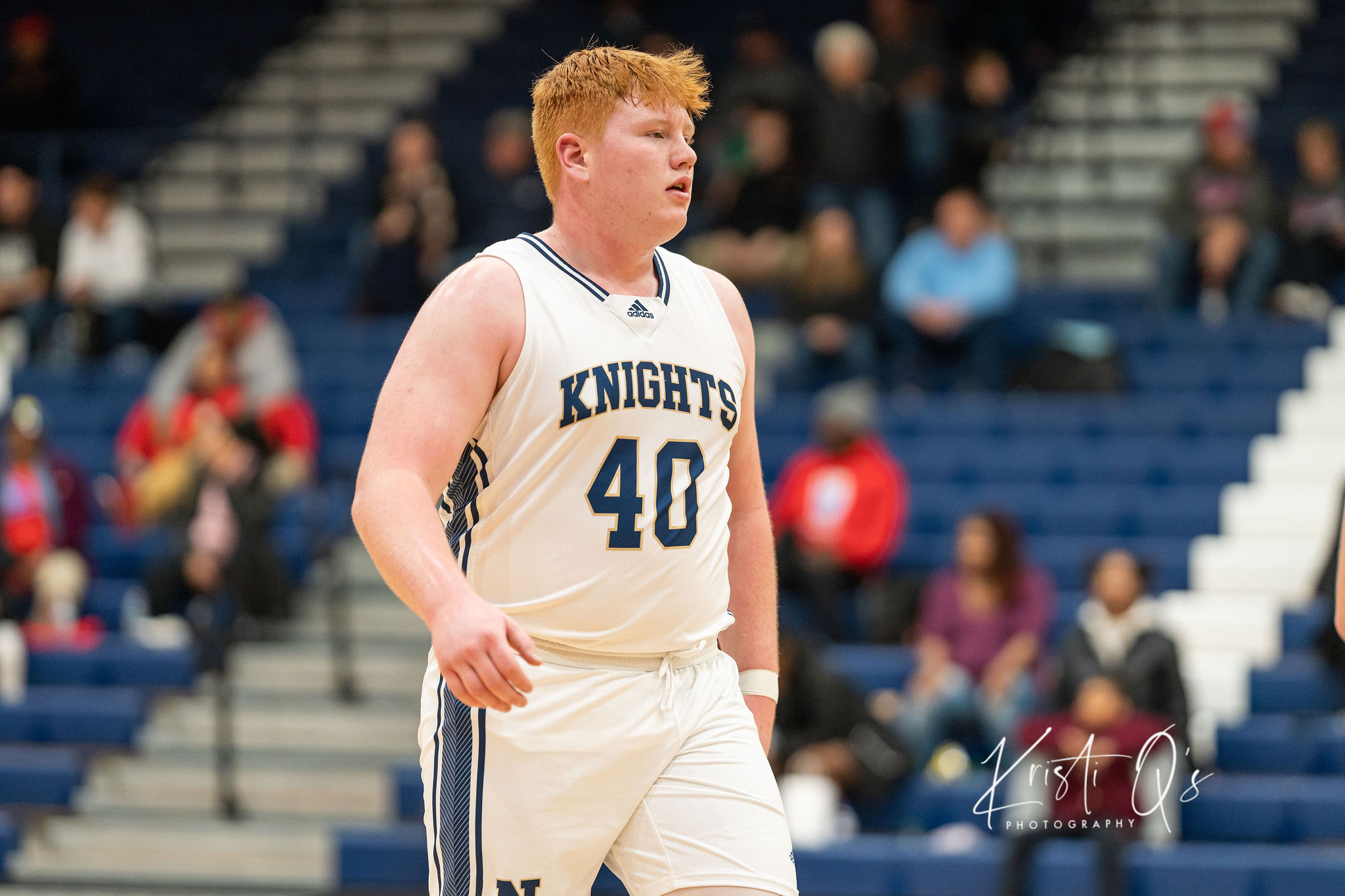 We are near the halfway mark of the NE8 conference race and the plot is thickening on whether anyone can beat the Norwell Knights, who so far look like the favorites in their conference.

Speaking of Norwell, it was a very good week for them with an impressive 79-57 win over Wayne last Tuesday and a 69-54 win over rival Bellmont.

After a close 56-47 loss at Carroll last Tuesday, the Barons pulled off a gutsy 52-51 OT win over East Noble to get their first win of the season. As of today, the Barons are on a 2-game winning streak.

But arguably the most intense of games came from the New Haven Bulldogs who had a roller coaster week. Following a 56-49 loss to Bishop Dwenger, New Haven rallied to beat Leo 56-55 on a Darrion Brooks putback with just a second remaining. They would go on to lose a close one to Carroll 58-52, but the Dawgs show they’re capable of being a great team.

Now we will see what the rest of this week has to offer.

Snider is one of the area’s youngest teams, and it shows in portions. They’ve lost 12 in a row, but it’s not for a lack of effort. The Panthers have lost 8 of their 12 games by single digits, and they’ve come against strong programs.

Snider is definitely a scrappy group this season, and Leo knows they can’t have a letdown performance. Now they’ve spent the past 3 games without Jackson McGee. So we’ve seen more of the role players doing their thing led by freshman Nolan Hiteshew, Sol Richard, and Eli LaGrange.

On top of Trey Hiteshew averaging 15.3 points, Nolan averages 7.7 per game. The key area for Leo will have to come through boxing out Snider’s young athletes and being able to dominate the paint, despite not having their usual height. That way they can open up the offense with their talented shooters.

Don’t look now, but Beasley Ball is on a winning streak! After starting the season 0-11, the Barons found the winning magic against East Noble.

Then they went into Angola and performed the most remarkable comeback I’ve ever seen from a DeKalb team let alone a Marty Beasley team. They were down 20-6 after the first quarter, and Angola shot 70% from the floor.

For the rest of the game, DeKalb out scored them 61-34. AMAZING! Alex Leslie had the game of his career: 26 points, 5 3’s, 7 rebounds, and 3 assists. He could not miss in the 2nd half! Watching the film of DeKalb was night and day between the first quarter and the rest of the game!

For the first time all season, the Barons look confident, they look like the more poised team, and you’re seeing what Beasley wants from his team: Great shot selection, resilient on defense, and fighting for loose balls. And I have to mention DeKalb is soooo good from the FT line.

All season, we talk about junior Caden Pettis (14.2 points per game), and rightfully so. But when the whole team gels on both ends of the floor, that’s where the Barons are at their best.

Now for Columbia City, they’ve definitely had some great moments this season, especially with that 3OT game with East Noble, as well as on the road against Carroll, Bellmont and Huntington North. Despite the 65-56 loss to Homestead last night, Andrew Hedrick had 28 points to lead all scorers, and they competed with a Spartans program that usually has their number.

If Columbia City can regain some of that offensive efficiency from earlier in the season but also stay true to their self on defense, this team can beat anyone on their schedule.

I’m not saying they need to make 14 threes or grab 50 rebounds in a game. But it all comes down to fundamentals, getting stops on defense, and having an efficient offense (not necessarily the prettiest). We know what Hedrick is good at, but Showtime Stratton (Fuller), Rhet Wilson, and Kam Hoag know a thing or two about big time plays.

The key here tonight is to be able to adapt to DeKalb’s offense, guard their perimeter shooters, and avoid second chance opportunities. Hedrick, by the way, is 17 points away from 1,000 career points.

It’s a battle of two gritty basketball teams that will play some good ole fashion mucky ball at the Bellmont Teepee.

Much like with the girls’ matchup, this has been a very tight series with 2 of their last 3 meetings coming by single digits. These two are the conference’s top two defenses allowing 44.4 and 47.7 points respectively.

The Vikings are coming off a solid 50-37 win over Canterbury thanks to Levi McElhaney’s 15 points, 5 boards, and a block. As you know, Teagle Ball is not everyone’s cup of tea, but when that offense finds rhythm, it can be dangerous without necessarily lighting it up on broadway. They win ugly, but they can be lethal from distance.

Another stat of note is the Vikings grabbing 28 rebounds against the Cavs, showcasing the physical nature of this team. It’s a team with balanced scoring, balanced athleticism, and they’re slowly maturing as a team; even if they don’t have “the best talent” on the team right now.

For Bellmont, this is a team that can give you a lot of challenges both from the perimeter and with their length. It’s your latest edition of Jonathan Fuelling’s basketball team riding under the radar in the middle of January only to eventually get hot late in the season. It’s gonna happen folks…it happens every year with this team these days.

You have to start with Kord Fuelling (14.5 points), and if you’re a hard core fan of old-school basketball, you’re probably going to appreciate his game. Yes, he shoots 29% from 3, but from 2 he’s at 50%. So, he’s a very efficient shooting guard.

Junior Jack Scheumann (13.4 points) has the Jack of many traits at Bellmont as a all-around shooter, ball distributor, and can crash the glass for a shooting guard. Bellmont has a nice combination of grit, shooting, and some athleticism that has a good balance of tradition and modernization to their styles. Bellmont will need to take care of the basketball and defend the paint to take away looks inside.

Whenever these two teams play each other, you know it’s going to be an entertaining game. It’s a nice rivalry in the NE8, even though it generally receives more attention on the gridiron.

Leo has been snake bitten in consecutive weeks of conference play where a late 4Q rally doomed any chances of a upset win for Leo. But with the unpredictability of the NE8, there’s still some time to make some ground in the NE8 and round into postseason form over the next month and a half.

Leo is not a team with size this year, so they are much reliant on their talent from their backcourt led by the Hiteshew kids. If Jackson McGee is unable to play this week, that is going to take away some of that size and scoring talents that gives Leo options and forces opponents to have be more creative on defense.

So this will probably come down to the role players like Collin Butler, Brock Schott, Eli LaGrange, and Sol Richard to fill the load against a pretty scrappy, but inconsistent East Noble team.

East Noble is still young this season, which is partially why they’re off to a slow start. But they’ve had a lot of trouble finishing off games.

Their last three games have been lost by a combined total of 8 points (two of the three went to OT). Offensively, they’re having trouble finding consistent production out of everyone. But it seems that Hunter Kline and Owen Ritchie have been their two best offensive scorers.

For EN to have a shot, they got to show improvement in their ball handling, finding balanced offensive flow, and most importantly maintaining intensity on defense. This Leo team can splash a lot of triples, so their defense needs to be good.

This is without question the game of the week for NE8 boys basketball as the Norwell Knights travel to Armstrong Arena to face the New Haven Bulldogs.

It has become quite the boys basketball rivalry these days with their last 3 meetings coming by single digits. In fact, these two have exchanged wins during that span. Norwell won in 2020 54-45 at Norwell, New Haven won in 2021 58-50 at New Haven, and last season Norwell won 70-69 at Norwell.

That last game in particular was one where New Haven had so many chances to get that win, and boy was that a devastating loss for the Dawgs. The NE8 championship would have looked quite different had it not been for Norwell’s late-game heroics from the entire team.

Norwell is a very deep team rich with talent, some size, and insane athleticism. Luke McBride gets a lot of attention for a reason as he’s averaging 23.3 points per game, but it’s so much more than. The future Pilot knows how to steer the ship as  an elite competitor. The team trusts him with the game on the line, he’s going after loose balls, he’s finding teammates, and he’s doing what it takes to get a win. By the way, McBride is 33 points away from surpassing Will Geiger on the Norwell and program’s all-time scoring lists.

Lleyton Bailey, the quarterback of the football field is also the quarterback on the court. One of the area’s most underrated playmakers with some nice crossovers. Jake Parker is a hard-nosed kid that goes to the net hard, but shows no hesitation to extend his range. Brody Bolyn, the future center on Bowling Green State’s football team, (pictured on the cover photo) brings a lunch-pale mentality that contributes to scoring gritty baskets, and using his strength to overpower opposing defenders.

Luke Graft, not only has a future on Taylor’s football team, but he shows some craft on the hardwood. Junior Ashton Federspiel is as tough as you’ll find in the 260 as he showcases the intangibles of a power forward, physical and playing hard. Cohen Bailey has a shooter mentality in the backcourt. Norwell has a nice mix of talent and unique play styles that gel well to Coach McBride’s team on offense and defense.

However, this New Haven team has something Norwell doesn’t usually see and that’s a diverse style of basketball. This is basically a SAC team that emphasizes their ability to attack hard and showcasing different athletic abilities. It’s a team filled with position-less players.

Darrion Brooks is the next future collegiate standout from New Haven as he showcases glimpses to what his brother Keion Brooks Jr. Showed at North Side. A cold-blooded shooter that attacks the rim with authority, and he plays very tough defense. This is one difficult player to contain when he’s locked in.

Jeremiah Cottrell has very unique play styles that fits him as a player with unbelievable athletic potential and one that can be a floor general at the same time. New Haven’s players basically play the exact same way since its position-less offense. JoJo Robertson is an energy hamster because he’s constantly sprinting on the floor whenever he’s playing.

James Hardy IV and Mylan Graham showcase that athletic explosiveness that made their presence known in football. And of course there’s the freshman Korbyn Hammel. Don’t let that name fool you, because when he’s on his groove, he adds some jam to that offense both as a lethal shooter and as a player that can create shots by his abilities.

I’m so excited to see how these contrasting styles work against each other at New Haven Saturday night. The strong, physically athletic Knights vs the fast-tempo, high-flying City Dawgs