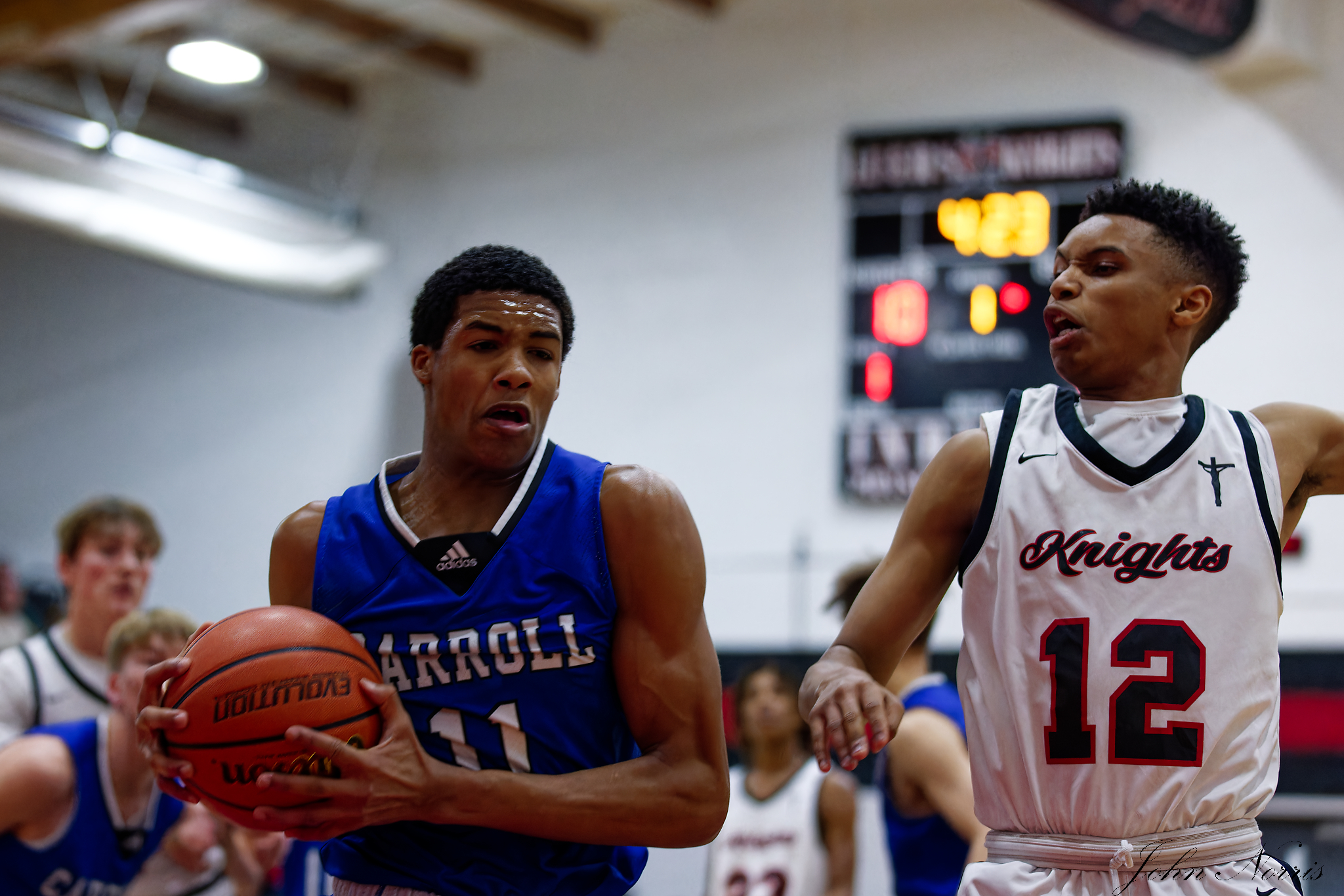 The Spartans have struggled as of late as they appear to just not be playing at the same level they were a few weeks ago. After an 11-1 start to the year, the Spartans have gone 2-2 in their last four including a 51-27 loss against Blackhawk that was the 2nd lowest point the Spartans have put up in school history. There are many different possibilities for why the sudden struggles of Sparty, one being the return of Tucker Day. Although Day himself has been playing pretty well and would seem like a benefit, the Spartans just aren’t used to having him on the floor and have to readjust the flow with him on the floor. One other thing that appeared to be an issue against Blackhawk and Snider was the shooting woes of Kyron Koapuiki but he has quickly gotten out of that short slump with two nice games including a 17-point performance Tuesday on six for 8 shooting. As the Spartans still look to put it all together they will have a huge game in the SAC Friday night against the only other remaining unbeaten the North Side Legends.

The Legends are now on an impressive four-game winning streak in which all the games were decided by single digits with Wayne being the only team during the stretch that resides in the top 150 teams in the state according to Sagarin ratings. Now that may not sound that impressive but what you have to take into account for the Legends is they have been without two starters(Jordan Green and Jaxson Fugate) since mid-December. In the last two games they were also down another starter in Eugene Young Jr. So to be able to tough out these games without multiple starters really shows the resiliency of this squad. Specifically, in their last game their will to win really showed as late in the game not only did they have three starters out due to injuries they had two more starters foul out(Brashawn Bassett and Bohde Dickerson). Down the stretch, this team had to scrape together to pull off the win as they were led by Bruantae Johnson who had an incredible performance of 47 points and 16 rebounds. Now they will be looking to overcome their setbacks once again, this time in a game that could end up deciding the conference against the Homestead Spartans.

The Generals struggled to start off the new year losing their first three games in January but they were able to get a nice bounce-back victory over Dwenger last week. In the win, Chase Barnes came up huge with 22 points on seven for eight shooting. Jevon Lewis was also making some big plays with 12 points, 10 assists, and 4 steals. Overall the Generals have had a pretty good start to the year as they do have just one loss in conference play to the Legends. This squad is going to be rooting for a Legends loss to come to try to once again control their own destiny in the conference as they have yet to play against Homestead(the other remaining unbeaten). This Friday they will look to keep their streak on the winning side against Northrop.

In the last outing for the Chargers, they finally suffered a loss that wasn’t by 2 or fewer points but this was only 6. Every single game this season they have shown they can be competitive against anyone which will make for some interesting games later on as they still will face both North Side and Homestead. Before taking the loss against Fishers they were on a 5-game winning streak and will look to get back on the right path when they face a scrappy South Side Archers squad Friday.

The Cadets got a nice bounce-back win over South Side last Friday to snap a two-game losing streak. On the year it has been a trio of guys leading the way with Ajani Washington, Cole Hayworth, and David Speckhard all averaging over double-digit points a game. Washington also comes up big in other areas with 5 rebounds, 3.7 assists and 1.6 steals a game.

The Knights have had some ups and downs this season as they started 4-2 and are 1-7 since but that one win was against a very solid Cadet squad. Cadell Wallace has been the biggest piece for the squad as he is just shy of 16 points a game for the Knights. Nick Thompson has also come up pretty big with 10.1 points and 4.2 rebounds a game. The Knights will now try and snap their two-game slide against Bishop Dwenger.

Last Game: 74-73 loss against North Side

The Bruins came very close to getting a big upset win over the Legends in their last outing that would have put them near the top of the SAC but they fell just short. Its been a duo of seniors leading the way for this squad this year in Jayden Schmenk and Dalman Alexander as they combine for over 25 points a game. Alexander also comes up big on the glass with over 8 rebounds a game. The Bruins will be looking to stay above .500 in conference play when they face the Generals Friday.

The Archers once again showed they can compete with anyone as they kept a game against the Cadets a battle all the way till late in the 4th quarter. Zemaree Phillips and Omarion Washington have been crucial for this squad all year putting up some big numbers. Even though this team’s record may not show it, they are a difficult team to beat and will give the Chargers a challenge on Friday.

Last week the Saints were able to go 1-1 with a nice win over New Haven that was then followed by an 18-point loss to the Generals. The Saints started the year 1-9 and are looking to turn it around as the New Haven win could be a building block for the rest of the year. They will look for their first SAC win on Friday against Luers.

With a loss to Leo earlier this week the Panthers have now lost 13 straight games but to give them some credit 9 of those games were within single digits including just a one-point loss to Huntington North. Ke’ron Billingsley has led the team in scoring this year with 12.4 points a game. They will now look for their first win in conference play against Concordia on Friday.