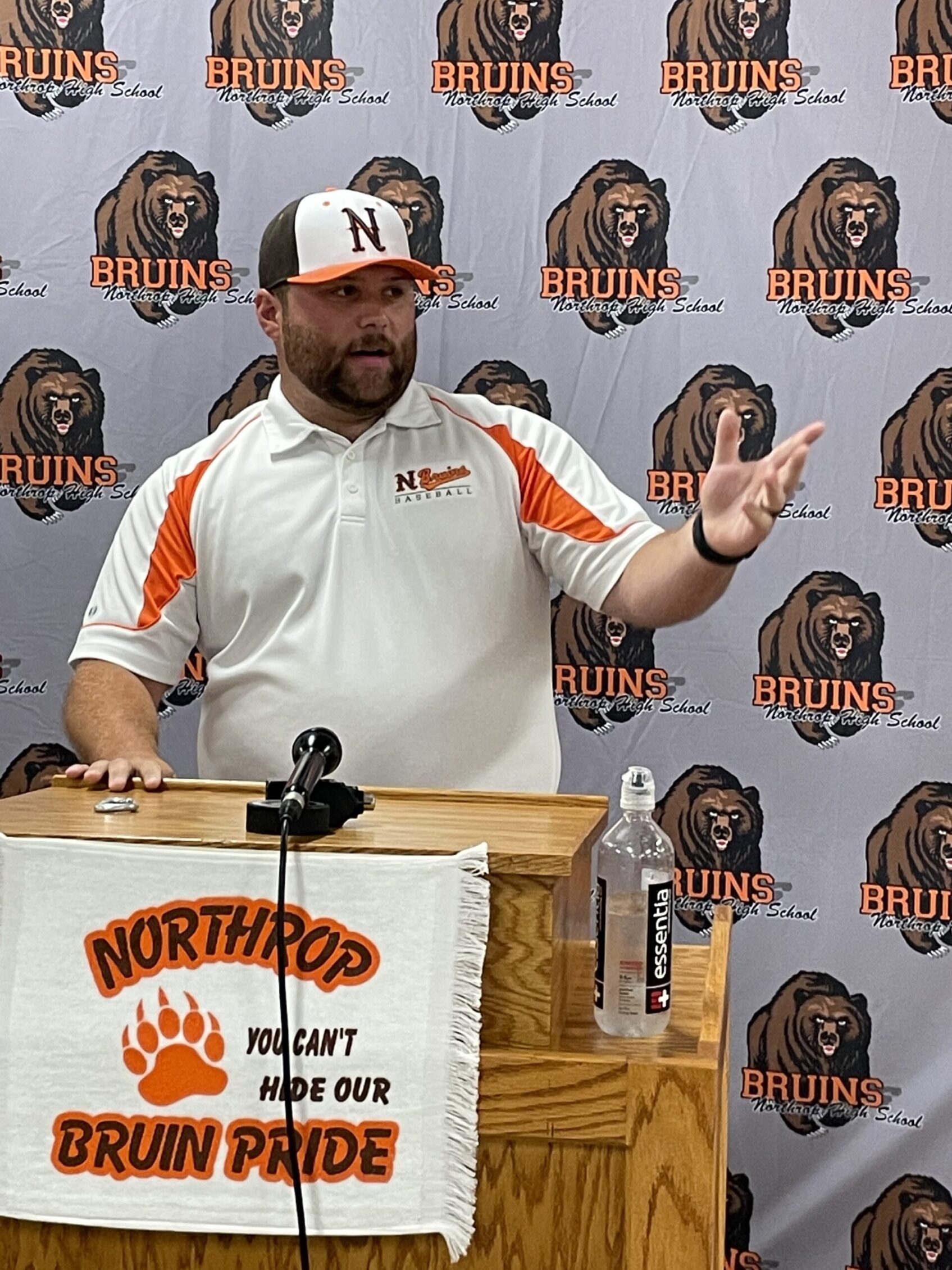 Northrop High School has hired Austin Mannan as their new head baseball coach. He takes over for former head coach Matt Brumbaugh. He was introduced today at a meet and greet at Northrop’s “Bruin Room”. Mannan had spent the last four years (including 2020, when the season was canceled due to COVID-19) as the head coach at North Side.

“I spent a long time at North Side, and I feel like I was able to build a lot of great things there,” Mannan said. “Similar to Northrop right now, when I came in, I had a large group of juniors, 12 I think, when I came in…And they were the perfect group to come in with. They helped set the tone for the program. And these guys [at Northrop] have been under Coach Brumbaugh for so long. They know the expectations. So I’m just excited for them to come in and kind of give me the same hope and reaction, I guess I should say, with such a large group. They know the way, they know the Northrop way, they know what’s expected to win, because they have been successful, and I think that it should be a pretty seamless transition.”

Coaching is a job that Mannan wanted for a long time before getting his first coaching job. When he was student teaching in the spring of 2018, he served as an assistant coach at Woodlan Jr/Sr High School in Woodburn, IN. He graduated from the University of Saint Francis that same year and then became North Side’s head coach starting the 2018-2019 school year.

“I was just very fortunate that North Side had an opening when I finished school and I graduated, finished playing in 2017,” Mannan said. “When I transferred I lost a bunch of credits so I had to go an extra year, which kind of worked out. But, I mean, as soon as I graduated, the head coaching job opened up, I interviewed at North Side, and ended up getting the baseball job.”

Mannan will continue working as a special education at Lane while coaching the Bruins this upcoming school year. He also had that job while he was coaching at North Side. Lane is part of the Fort Wayne Community Schools district, as are Northrop and North Side.

Northrop baseball has been successful over the years. The Bruins won state in 1983 under Chris Stavreti. They were the state runner-up in 1981, also under Stavreti. Most recently, Matt Brumbaugh led the Bruins for 11 seasons, eight of which were winning seasons.

“It’s always been a dream, man, and to take over a program like Northrop that has such a long-established history of winning, I think there have only been six coaches in the history of Northrop baseball, so to be able to etch my name in there is a pretty big deal, it’s a pretty cool thing to experience,” Mannan said.

Not only is Mannan familiar with the Bruins’ baseball program, but he has a great deal of respect for it, particularly some of the more recent teams. He’s expecting a high amount of kids to be a part of the team this upcoming season.

“[I’ve] always had great respect for the way Coach Brumbaugh goes about the game, the way his coaching staff went about the game,” Mannan said. “I’m just excited because there are so many kids that are coming out for the program. The more people you have the better you can be, and the more developmental you can be. Really just the sheer number of the kids that are coming out just really excites me because…I love doing stuff in the fall like a fall world series and inter squads. And when you’ve got enough kids you can do all those things.”

Much like his first year at North Side, Mannan could have a high number of juniors in his first season at Northrop. According to Mannan, the Bruins could have 11 juniors for the 2023 season.

“That’s huge,” Mannan said. “To come in and have a group like that who’s already had two years under Coach Brumbaugh…and to retain those kids, and then have them for two more years, I mean…the opportunities are endless.”

Mannan has plenty of coaching experience in Northeast Indiana, which could prove to be very beneficial to his career at Northrop. In addition to playing at USF and coaching at Woodlan and North Side, he has also spent the last three years as a head coach in the Fort Wayne Diamondbacks, a youth travel baseball organization.

“The connections that I’ve been able to make throughout my coaching and playing career are incredible,” Mannan said. “I talk to most of my coaches still. Coach [Dustin] Butcher, I’ve had a lot of support from him…Coach Manny Lopez over at the [Fort Wayne Diamondbacks] has been incredible for my coaching career. When I came into North Side was the first year I started coaching with the Diamondbacks, and he opened up his facility to my North Side guys and we were able to come in and work in the offseason in the winter time…And ultimately, my high school coach that I had is really who I try to emulate … you know I’d run through a brick wall for that guy at any time. He did things the right way. He was hard on us. He got into us. But he expected a lot from us and we knew what he wanted, and we did our best to fulfill those wishes for him.”