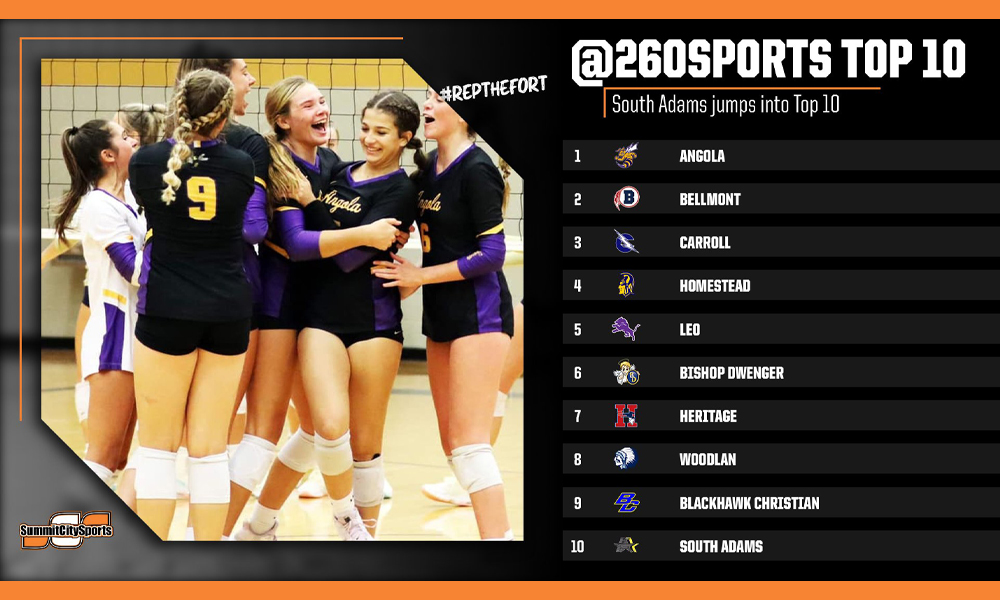 Angola remains at #1 a 3-0 start to the season with an impressive straight-set victory over Dwenger.

Bellmont stays at #2 even after a loss to perennial power Yorktown.

Carroll moves up 3 spots to #3 after winning the Tom Heck invite with a win over a good Andrean team.

Homestead moves up 1 spot to #4.  Their lone loss is to Andrean, but they have good wins over Concordia and Leo to start the season.

Leo moves up 2 spots to #5 even though only played 1 game, a loss to Homestead. Big match up Tuesday at Dwenger for the Lions!

If Dwenger gets beat by Leo they might be the next team out of the top ten.

Heritage moves up 2 spots to #7. They play Carroll this Tuesday, so we’ll find out if they are as good as advertised.

Woodlan stays at #8, 3 wins already under new head coach Gerrid Rydell has them headed in the right direction.

Blackhawk Christian moves up one spot to #9. Next week they’ve got matches against Bellmont and Woodlan. Win both of those and you’ll be moving on up just like the Jeffersons!

We’ve got a new team to the poll and that’s South Adams. They are 6-0 already and Ashley Buckingham’s team is getting better. Do I see a visit to Berne in the not-too-distant future? Stay tuned!

Falling out of the top was my #3 Concordia. An 0-2 start to the season and a lot of question marks surround this team. I believe once Trish Miller finds the right rotation and the younger players catch up to the speed of varsity matches, they will return to the top 10. We’ll keep our eye on them!