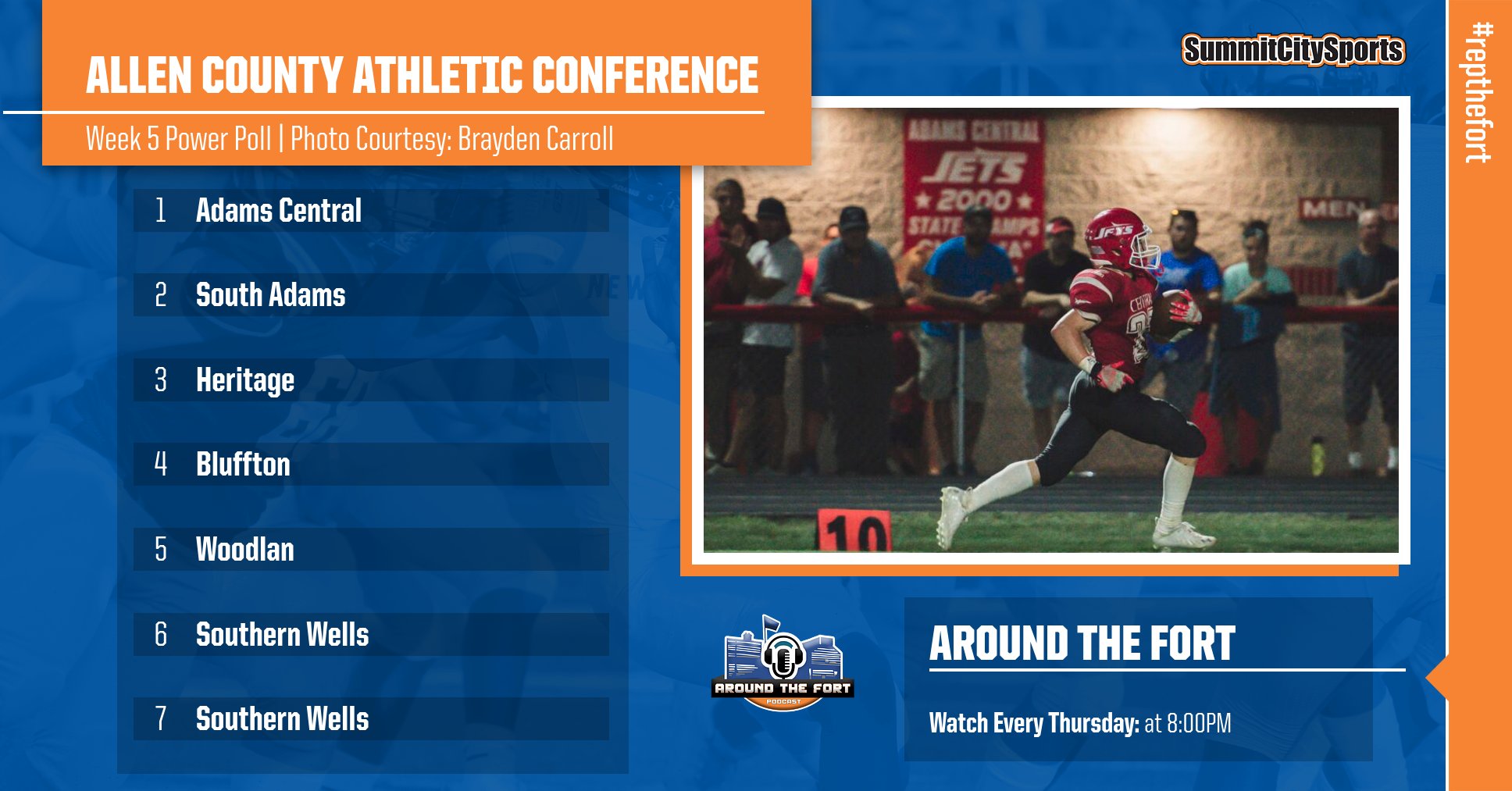 The Flying Jets just continue to win and continue to win by wide margins. a 3rd straight win with 40+ points on the board, and a second straight allowing one sole touchdown (last week they defeated Jay County 48-7). They dominated the second-best team in their conference, Heritage, who was just coming off a massive 28-27 upset victory over South Adams. It is hard to see anyone on the Jets’ remaining schedule outplaying them for four quarters. The ACAC is firmly in the hands of Adams Central if they can get past their arch-rival from Berne this week.

Where to put South Adams and Heritage has been a tough question to answer. Just to clarify: Heritage and South Adams are easily interchangeable. Heritage’s upset win over South Adams is their argument, but can you make an argument beyond that? Every other week South Adams has been a better-looking team than Heritage, and a 1-point loss at the gun is a close enough defeat to still believe the Starfires are the 2nd-best team in the ACAC. Upsets happen any given Friday night. A win last week over ranked Monroe Central was a big factor in putting them back at #2. But now they have 1A’s #2 coming to town, and they will need to play their best game of the season to defeat Adams Central.

Usually, teams that average under 20 points per game AND a -7.0-point margin do not own a winning record. But Heritage is a much better team than the stats show. Their two losses came to Norwell and Adams Central. Both were blowouts, but both came against teams that are state title contenders in their individual classes. After two straight seasons with 1-4 starts, head coach Casey Kolkman has his team off to their best start in his tenure, and that upset win over South Adams only adds to how sweet this season has been. Their two blowout defeats are the only things holding them back from that #2 spot. But with a talented backfield highlighted by the versatile junior quarterback Kobe Meyer, with over 900 combined passing and rushing yards, Heritage has a very realistic shot at finishing a perfect 4-of-4 to close the season.

Week 6: at 1A Southern Wells

After Week 1’s 21-0 shutout defeat versus Northfield, the Tigers have kicked it into high gear. Bluffton is 3-1 since that season-opening loss, with their only other defeat coming against South Adams in a 50-35 offensive showdown. Led by senior running back Anthony Cruz, whose been averaging north of 100 yards per game on the ground, the Tigers have averaged 34.5 points an outing since Week 2. With Heritage and Adams Central sandwiched between the final four games of the season, it will be interesting to see if Bluffton can keep up their stellar play. This week against Southern Wells they will have a nice opportunity to tune up and get ready for a tough stretch upcoming.

Earlier this week I had Jay County just barely above Woodlan. But after looking deeper into Woodlan’s quality of wins, that Central Noble victory looks much better than Jay County’s win over Blackford (both Woodlan and Jay County’s other win is versus Southern Wells, by near the same score). The Warriors need a win this week against the Patriots and next week against Culver Academy. They will finish their season running the gauntlet of the ACAC, with dates at South Adams on October 7th and at home versus Adams Central on the 14th. If they can pull 2 wins out of their last 4 games, that gives them much more confidence heading into the postseason.

It has been a tough stretch of ball games for the Patriots. Outscored 82-14 in their last 2 outings, Jay County is looking for a much-needed morale boost this week against Woodlan. They have managed to win both their victories by wide margins (a combined 82-6 margin), but it is against the tougher opponents where Jay County’s flaws have really shown. With a combined 4-to-0 turnover ratio in their latest two defeats, ball security has been a major issue. That issue could be highlighted this week, as they face a Woodlan team that has forced 8 turnovers this season on defense. The Patriots are going to have to prove themselves to the ACAC this week.

For a third straight game, the Raiders have been held under 7 points. And in the fourth straight game, they have given up 40+ points on defense. To say it has been another tough road for Southern Wells is an understatement. The rest of their schedule does not exactly strike confidence towards a chance at any wins. However, the Raiders have a chance in sectional play to snag a win if they get drawn against a team like North Miami. For now, they have a date with the Bluffton Tigers on Friday night. Improving week-by-week is the name of the game for the Raiders, and they will look to do the same this week before their September 30th bout with ACAC frontrunner Adams Central.