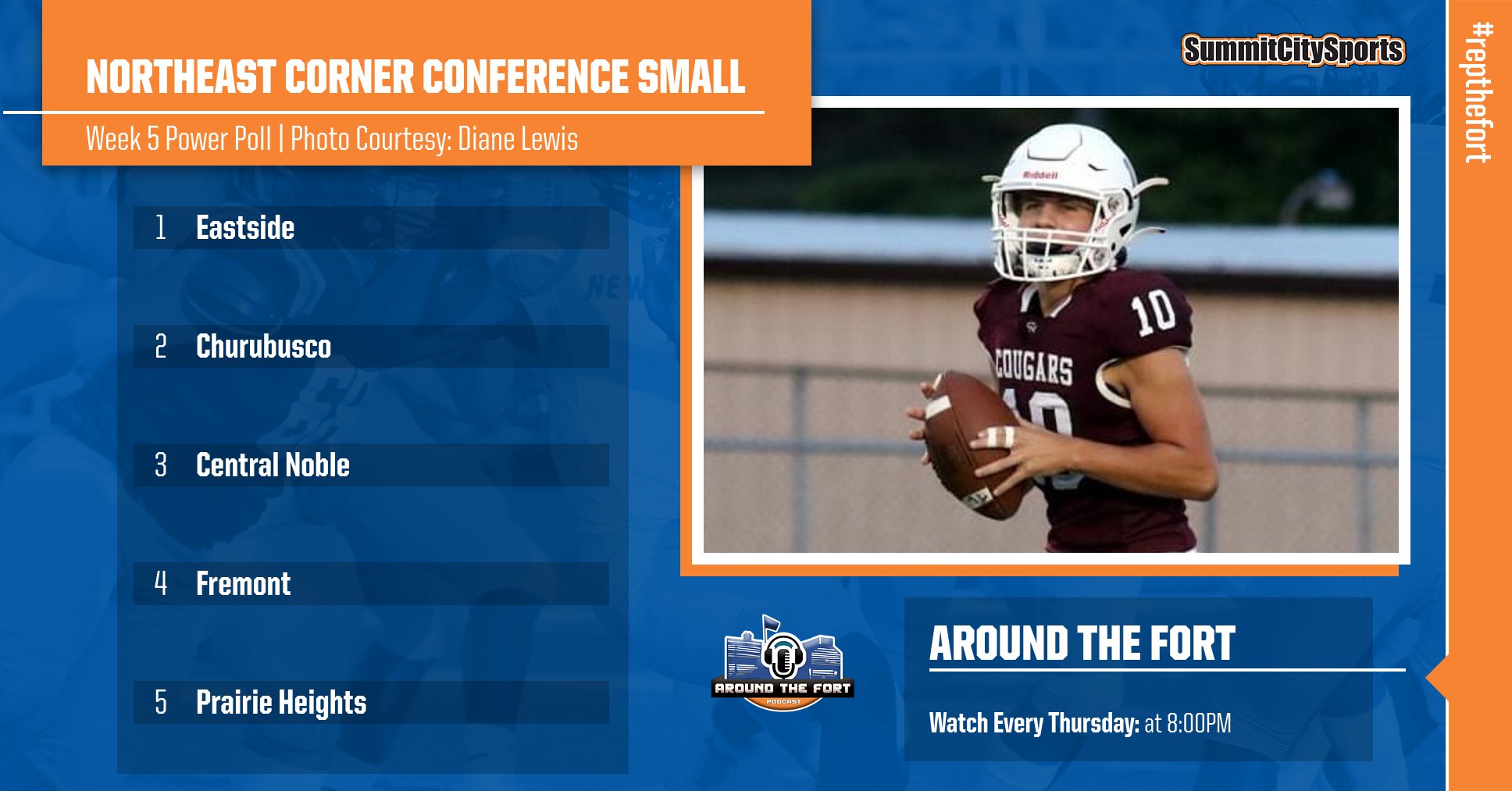 Who’s ready to talk about some old-school, county football? If the answer is yes, then the NECC is the place to be. We are now two weeks into NECC divisional play, and we are already in a situation where a share can be clinched this week. The Small School Division will have to wait until next week for any realistic chance of Central Noble or Eastside clinching a share of the Small School Division. Today, I’m here to rank all 10 NECC schools through Week 5.

Located in Butler, IN (DeKalb County)

For the second week in a row, Eastside remains as my number one ranked team in the NECC. They started off slow at 1-2 after two heartbreaking losses to Adams Central (25-21) and West Noble (28-27 OT). However, they’re starting to get healthy, and the numbers reflect that. Eastside has outscored their last two opponents (Busco and Garrett) by a combined score of 63-18. The dominance that we saw most of last season are slowly rounding into form.

The Blazers have used their tremendous line and a strong running game to their advantage as they average over 306 yards a game led by the trio of Carsen Jacobs, Briar Munsey, and Dax Holman. There’s a reason SummitCity Sports loves Dax Holman because he (as I intentionally use a Fantastic Four reference) clobbers opposing linemen with ease. He is a natural talent that embraces the ability to put the pedal to the metal. And we cannot forget Carsen Jacobs is an elite corner that he quietly thrives in.

Plus, Eastside has held their last two opponents to less than 200 yards rushing. Eastside has eight sacks and four picks to their record so far this season, which means the defense is starting to get back to playing Blazer football the way Todd Mason knows they’re capable of playing. In fact, the Blazers’ line has some of the most talented linemen in the area, which includes Dackotia Reed.

The schedule starts to open up with back-to-back home games against Fremont and Prairie Heights combined for a 3-9 record (0-8 since Week 3) and a potential divisional-clinching game at Central Noble in Week 8. The next real test Eastside will probably face is Week 9 at Angola. So that’s going to be the challenge with Eastside over the next couple weeks.

Located in Churubusco, IN (Whitley County)

I’m sure Head Coach Paul Sade and his Busco boys were not very pleased by the way the Eastside game went for them. This 42-0 win over Prairie Heights should not come as a surprise given the number of frustrations that the team is still feeling right now.

As someone that grew up going to a rival school, I know how much the Busco community takes their football seriously, and I am going to be honest: Busco hasn’t come close to playing the type of football they can play. Just think about this for a second. Busco still runs their usual Wing-T offense that averages 223.6 rushing yards per game, led by senior Wyatt Marks and his 421 rushing yards. Jeff made a great point when he compared Wyatt Marks to a VERY famous Busco and Saint Francis grad in Jason Nicodemus. I know a few others that were like that: Landon Harris, Jake Fulk, Nate Keener, Garrett Horn, Sam Richards, etc.

On top of that, you have a generational athlete at Busco in senior quarterback Riley Buroff, who has thrown for 526 yards on 54.3% completion and has rushed for 177 yards (that does not include his punt and kickoff returns). Buroff as a track star dominates the entire competition; Buroff’s an exceptional athlete beyond words. Gavin Huelsenbeck has always been on my radar dating back to his basketball days as a 6’5 center, and he is having a GREAT season at tight end.

This Busco defense, when they tackle well and execute the game plan, is still a strong defensive unit, such as Kameron Rinker, Angelo Ianucilli, Brennan Gaff, Croix Haberstock, and Cullen Blake. Let me tell you I LOVE CULLEN BLAKE’s GAME. Cullen is-what I call-Busco’s own Swiss Army Knife. You can place him in any situation on both ends of the field, and you know 120% what you are getting with him.

There’s not many of these county schools that thrive better at getting the most out of a team with less depth than Paul Sade and the Churubusco Eagles. In that sense, Cullen sort of reminds me of 2020 Busco grad Gage Kelly in terms of being this super versatile player that never stays off the field without giving his all. I know they miss the tremendous presence of all-state linemen Hunter Bianski (who graduated last spring), but Busco knows how to retool their roster every year because of how detailed this coaching staff is. Now, I want to see them refine some things, and work on some of the issues they have been dealing before next week’s anticipated Battle at the Baseline game with Central Noble.

Located in Albion, IN (Noble County)

For those of you that don’t know, I went to Central Noble (2016 grad). Some may say I am the NECC guru, but before that I was known as the guy that knows the history of Central Noble Athletics. I remember the days when the football team lost 30 straight games between September 25, 2010, and September 27, 2013 (I am glad this program has grown this much since my sophomore year of high school). I was the “water boy” when we went 5-5 in 2015, which at the time was considered CN’s best season since 2007. I can tell you more about my nostalgia and my background into high school sports, but that’s for another time.

I am probably somewhat of a critic when it comes to Central Noble, but that’s because my expectations always seem to be higher than what most people think. What sophomore Brody Morgan has done so far at quarterback is nothing short of outstanding (I will get to him in a second). Historically, CN is not known for throwing the football because they are about old-school, POWER football. However, last Friday saw Brody throw for a school record 296 yards on 15-19 completion and three touchdowns (two in the air) against Fremont, which broke Rex Fulk’s record of 281 yards set in 1979 (Only the program’s 7th season of their existence). In fact, Brody leads the NECC in passing yards with 738 yards on 65.8% completion.

Early into this season, CN was trying to utilize the Wing-T more because that worked last season when they had Will Hoover. However, because their backfield is a lot more inexperienced this season, although Devin Hiestand is starting to gel lately, CN could not generate any offense against a strong West Noble D-Line. At the time Tyler Shisler went down to an injury, he was the starting quarterback and Brody was just a wide receiver, but now we are starting to see CN adopt to a more modernized shotgun spread offense where the speedy receivers have thrived.

Churubusco transfer Drew Pliett (simply pronounced as FLEET) quietly leads the NECC in receiving yards with 317 on 21 receptions (he also has 2 INTs on defense). Tysen Deck is only 18 yards behind him sitting at 299 yards receiving in just 10 receptions. On defense, Central Noble is as I stated earlier a physical team that plays tough as they have 287 total tackles, seven INTs, and a whopping 14.5 sacks. Brayden Kirchner, Ethan Skinner (who has 4.5 sacks by himself), and Kaiden Burkhardt do a tremendous job anchoring the front 7 on both sides of the field, and I like what Riley Bremer brings in adding value in establishing a physical presence.

Despite the promising turnaround, the next three games are what I call for CN “The Triple-Header of Doom” because these three games always give CN the most trouble: Lakeland, Busco, and Eastside. While CN has had Lakeland’s number in recent memory, the 2022 Lakers are not your grandfather’s Lakeland Lakers because the renaissance has arrived in LaGrange too.

Obviously, they will need to expand that box to try to slow down Malaivanh, but I do wonder how they are going to cover tightly on Owen Troyer. In the past, CN prefers to expand the box with one safety covering two receivers, which you can say fits more of a zone defense than man. It is also worth noting that CN has a younger secondary than last season with the graduation of Preston Diffendarfer and Ashton Smith (who is now at Trine). I think it’s going to be a fascinating matchup on CN’s homecoming night.

Located in Fremont, IN (Steuben County)

Prior to Week 3, Fremont was enduring its best start since 1989 and poised to go 3-0. However, much like their 1989 season, Fremont has not won a game since, and it is not pretty to say the least. Fremont has been outscored 124-8, although they did face a Southeast Michigan powerhouse in Erie Mason.

To be fair, the drop off from that 2-0 start was to be expected because they still have a long way to go to regain the glory days from the late 1990’s, and they don’t have a lot of depth on this team. What I will say when it comes to Fremont is, if you watch them play, they are never going to take plays off. Zak Pica is a solid quarterback at Fremont, Collin Green has shown promise at times for the Steuben County Eagles, and Brogan Blue is a competitor no matter what sport he plays. Fremont has talent, but it is a lot harder to win in football because this program is still in the learning stages of becoming a winner again. That’s why they beefed up some of their non-conference schedule.

The key for the next two weeks for Fremont is trying to compete against two quality teams in Busco and Eastside, and most importantly staying healthy. Once they get past Weeks 6 and 7, Fremont will have a chance at grabbing momentum going into sectionals.

If you take Highway 20 towards Angola, about 10 miles west of downtown Angola lies Green Lake to your left and to your right is Prairie Heights High School. Prairie Heights, as a community, is as blue-collar as you’ll find in the NECC. Parents and staff from Panther Country have told me that there is a barn nearby school property, and anything past that barn is basically Steuben County. That’s the kind of community you are seeing with Prairie Heights, besides the fact they have great volleyball and an elite wrestling program.

I have good connections with Pat McCrea, and I know he and his staff work exceptionally hard to bring respect to Panther’s football. I have never seen a group of kids work harder than Prairie Heights in any sport. They’re very young this season, which is why they have taken their ups and downs so far this season, especially with an inexperienced offensive line (which has just one returning starter). But if there’s anything you need to know about them is the fact, they have two very gifted twins in Jaden and Trenton Daniels. Trenton has thrown for 351 yards on 47.1% completion and has run for 142 yards. Jaden has caught 21 passes for 268 yards, and that is basically most of Prairie Heights’ damage on offense. Defensively, Caleb Manprasert, Lincoln Booth, and Tayvin Kyle have combined for 133 total tackles and 3 sacks.

When you have a program that has faced a lot of turmoil over the last three decades, growing pains are expected. They’ll be at Eastside this week before hosting Bremen next week. After that, they have a chance in winning a big road game against Fremont and trying to head into sectionals with some momentum to build with.