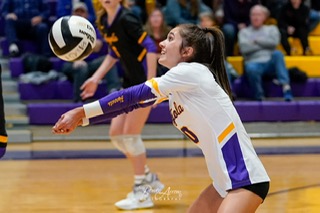 1.  Angola returns nearly every player from last year’s Sectional Championship team.  Coach Ball has weapons everywhere! Starting with Notre Dame recruit Morgan Gaerte.  An outstanding outside hitter who might be the top player in the area this year.  Plays all 6 rotations and has one of the best serves in the state.  Mya Ball a UCF recruit has grown into her body and plays opposite Gaerte.  Ball is great at the net and has amazing instincts.  Brea Harris adds to this group another big-time weapon.  She can play anywhere on the court.  Brea’s sister Ava most likely will be the setter this year along with Lindsey Call.  Other players to watch: Macy Oberlin, Tyrah Stillman, Virgina Luna and Paige Franz.  Angola has one of the tallest teams in the area with 6 players over 6 feet tall. This team has a legit shot to win the state title if they can get by Bellmont in the Regional.  Scary thing about this team is most of their core group are just Juniors!  Early season matchups with Dwenger, Bellmont, and Mount Vernon should tell us where this team will be when the postseason comes around.  Good luck Northeast Indiana with this experienced group!

2.  Bellmont coach Craig Krull returns another outstanding group of players from a team that lost in the state title last year.  Delaney Lawson will hit outside this year and she’s powerful.  Just a junior as well.  She will be their go-to player this year.  Jackie Sutter will add another attacker from both sides of the court.  My gut tells me she’s in line to have a breakout year for the Braves!  Lauren Ross will be the setter.  She might be the best setter in the area.  This team lost a lot of great defensive players from last year’s team.  The ball never hit the floor last year!  If they get the same defense this year from a new group of back-row players watch out.  Can they find a replacement for their middles from last season? Players to watch: Sami Christen and Syd Schultz.  They open the season with Dwenger, Luers, Yorktown and Concordia.  What a regional title match-up if we can get Angola and Bellmont!

3.  Concordia coach Trish Miller will need to replace her entire back row.  Jersey Loyer is arguably the best all-around player in the area.  They will rely on her for everything.  She’ll hit from the outside mostly. Can Cienna Lapsley give them some added presents in the middle?  Makenna Dommer will give them an opposite hitter because she is left-handed. Who will be their setter?  Players to watch Emily Hickle and Paige Jackson.  If CLHS fills the hole this team could win the SAC.

4.  Dwenger has a new head coach.  Olivia Current takes over a powerhouse program.  Can this team be a more balanced team?  They return both middles in Gabby Stores and Loretta Pelkington.  Lexa Zimmerman who was the libero last year might get to take some swings this year.  When healthy she can play anywhere!  How do you replace Eva Hudson?  Well with her sister Audrey.  Audrey can play all 6 rotations and will get a chance to hit from the outside this year.  Emma Tone will be the setter this year.  Players to watch: Bailey Chaney and Jillian Tippmann.  Overall, this team has the talent to win a ton of matches this year.  Balance will be the key for this team to get by both CLHS and Angola in the sectional.

5. Homestead might be the surprise team this year.  Coach Holtzclaw is blessed to have the twin towers in Abby and Ava Tindall.  They give this team a one-two punch in the front row.  Another player who might have a breakout season is Taeley Mahler.  She’s got long arms and stands nearly six feet tall.  Their setter is Haley Biebenbach.  She’ll have plenty of options this year.  They need solid back-row play this year.  Passing has always been an issue for the Spartans.  Players to watch: Natalie Blaufuss and Selah Kolpien.  We’ll find early how good this team can be when they open their season against CLHS.  Which just happens to be Summit City Sports first match of the season!

6. Carroll Coach Pandy Sinish has the top returning libero in the area.  Breanna Ginder got her chance two years ago and hasn’t slowed down.  If you love defense, she’s the one to watch.  Ellie Frey will be their top weapon from the outside.  Length and her hops are what the colleges like.  Ella Etter and Lauren O’Neil will share the duties in the middle.  Olivia Gisslin looks to be the setter this year.  They’ve got a solid group returning in the back row with Summer Hendershot and Emery Guderian.  The second half of the season is treacherous!  Their final 12 matches are against, Dwenger, Bellmont, Warsaw, Delta, Westfield, Yorktown, CLHS, Blackhawk Christian, Homestead, Muncie Burris, Leo, and Angola. OUCH!

7.  Leo head coach Ashlee Robbins has some holes to fill this year.  She does get Keila Garton back who can hit from multiple positions on the court.  Gracen Norris is back as well.  She and Garton will need to have led this team.  They need to find a replacement for Chloe Pierce their libero.  Zoe Zovach will be in the middle.  Super athletic player with tons of upside.  Her motor is always running!  Ava Maxwell will be the setter.  She learned a lot from Peyton Rolfsen last year.  Players to watch: Emma Barrnett, Syd Tackett and Annabelle Sweigert.  They’ve got early season matchups with Homestead, Dwenger, and CLHS.

8.  Woodlan has a great one-two punch in the front row with Ava Smith and Taylor Kneubuhler.  Smith can bring the hammer while Kneubuhler has the length.  Kneubuhler took over some matches last year.  Lauren Synder will add some depth in the middle. Makenna Smith should be a solid back row player for the Warriors.  Players to watch: Alyassy Harvey, Marrisa Smith, and Maryella Sharrar.  Can they compete in a stacked sectional?  They like Homestead need to pass better in crunch time.  They’ve got the weapons, but can they put it together?  Coach Jerrid Rydell will be at the helm this year for the Warrior.

9. Heritage was hit hard by graduation. Shelly Schwartz will need to find some new players this season. Kate Zellers can play both sides of the court and we’ll see if Lainey Simmons picks up where Ali Richman and Clair Bickel left off. There are a lot of question marks with this squad but Coach Schwartz will get the best out of every player. My gut tells me this team will be late bloomers this year.

10.  Blackhawk Christian head coach Anne Boyer looks to lead this team to new heights. They will be the tallest 1A school in the area. Allie Boyer and Abbie Cresse will make this team a legit team to make to the state championship. They could surprise some of the larger schools this year. They’ve got the entire team back from last season. Players to watch: Avery Volkert, Tessa Holman, and Delaney Kintz. If Blackhawk can get out of sectionals watch out. Their early season schedule is tough but that should get them ready for an end-of-season run.