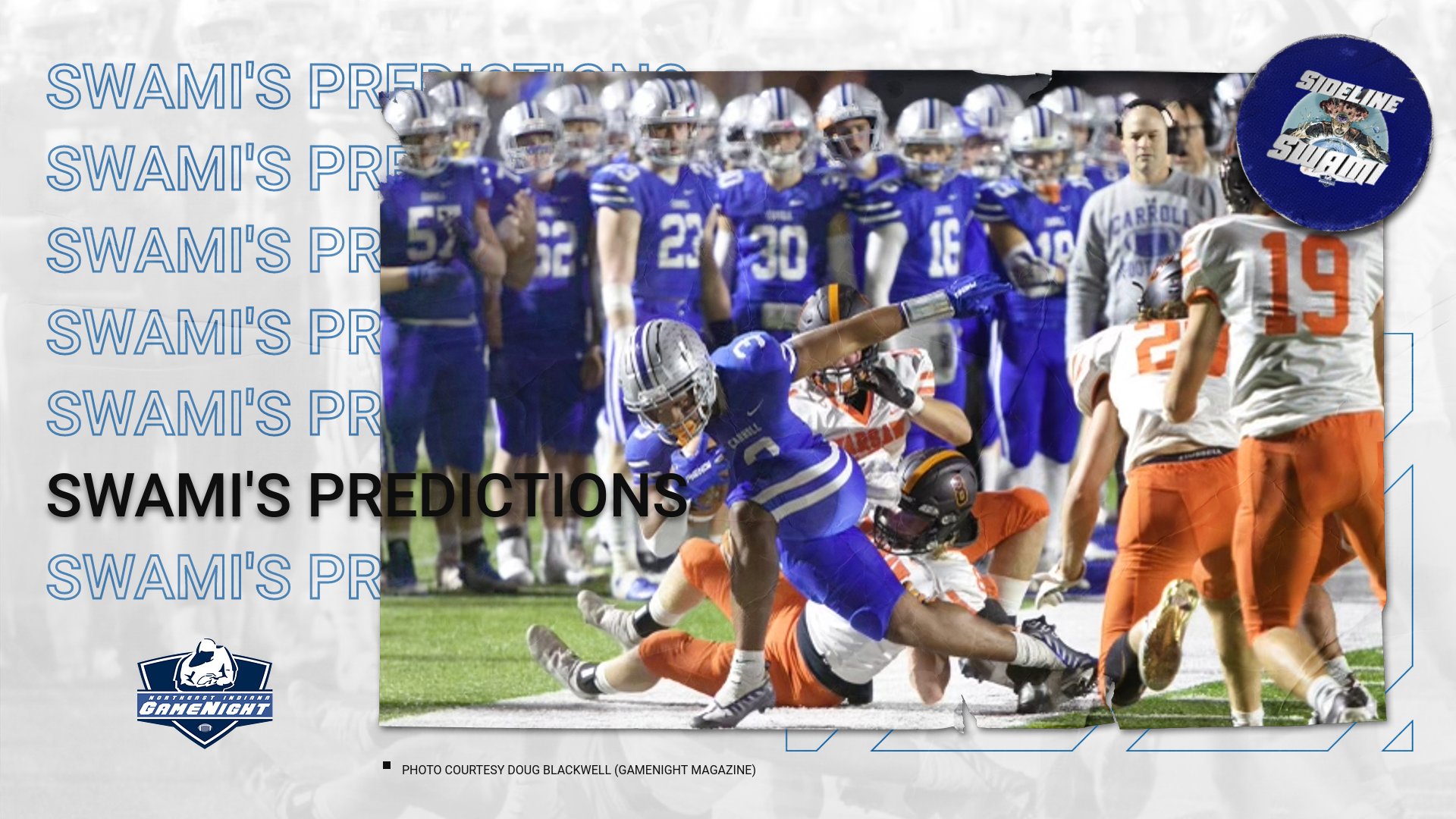 You like blue rings? We’ve got blue rings. Like nine of them, coming to a podcast near you. Legendary Bishop Luers coach Matt Lindsay – the architect of nine championship seasons for the Knights – was slated to be the special guest on Around the Fort this Thursday night (search “Around the Fort” on YouTube or find the link on SummitCitySports.com). Lindsay was the Knights’ head coach from 1987 through 2011, winning those nine state championships along the way. Two times his teams finished a perfect 14-0 (2001 and 2011). Luers has 11 crowns all-time, bookending Lindsay’s run with its first title in 1985 (a 25-7 conquest over Lawrenceburg) and its last in 2012 (40-28 over Cardinal Ritter). Former coach Steve Keefer, ironically, was the coach of both of those title teams.

CARROLL (11-0) at LAFAYETTE JEFF (9-2): The Bronchos won their first sectional title since 2002 last week at unbeaten Crown Point. Carroll will need to contain speedster Glenn Patterson, who gashed CP last Friday for 223 rushing yards. But the Jeffies haven’t seen a defense as fast and physical as Carroll’s unit. I’m seeing a big night from Carroll WRs Hansen Haffner and Camden Herschberger, plus some Braden Steely sightings in open space (in all three phases).

SNIDER (10-1) at MISHAWAKA (10-1): The Cavemen clobbered Concord last Friday night, leading 38-3 at the break before calling off the cave pups in a 38-17 conquest. Mishawaka had five different players record touchdowns against the Minutemen, including a 70-yard fumble return by Aiden Hooten in the first quarter.

KOKOMO (11-1) at COLUMBIA CITY (11-1): Two of the state’s more insistent ground attacks square off in this one, which leads me to believe that the game’s pivotal play will come via the pass. Does that mean Stratton Fuller steals the spotlight late? Perhaps. Playing this one at home might be the difference, as the Kats won’t get any home cookin’ that goes beyond Tender Vittles. Either way, this one goes down to the wire.

BLUFFTON (8-4) at BISHOP LUERS (7-5): Both clubs advanced to the regional round after pulling upsets a week ago. Well, the Knights’ upset was a bit more probable, as Sagarin had them winning by two scores. But the Tigers’ tale was definitely more unpredictable. The Swami flipped a coin to see who deserved a stack of B. Antonio’s pizzas and it came up heads – as in NOT Tiger tails – and the delicious pie was delivered to a grateful gaggle of guys from Luers High on Thursday night. Hope you enjoyed the feast, Luers men! In this game, I’m seeing big plays from Daring, McInturf, Jackson and Hogue.

CARROLL (11-1) at ADAMS CENTRAL (12-0): The Flying Jets will jump out to a big first-half lead, then salt things away after intermission with some between-the-tackles tendencies. I’m seeing TDs from the law firm of Black, Tester, Currie, and Bluhm – all in the first 36 minutes of action. Carroll (Flora) will put up a spirited fight early on, but AC’s talent will be too much as the Flying Jets cruise to another lopsided victory.

6A … WESTFIELD (8-3) at HAMILTON SE (11-0): Something tells me the Shamrocks shock the top-ranked Royals tonight.

4A … NORTHRIDGE (8-4) at NEW PRAIRIE (11-1): I’m going with Laura Ingalls and the Little House on the Prairie contingent.