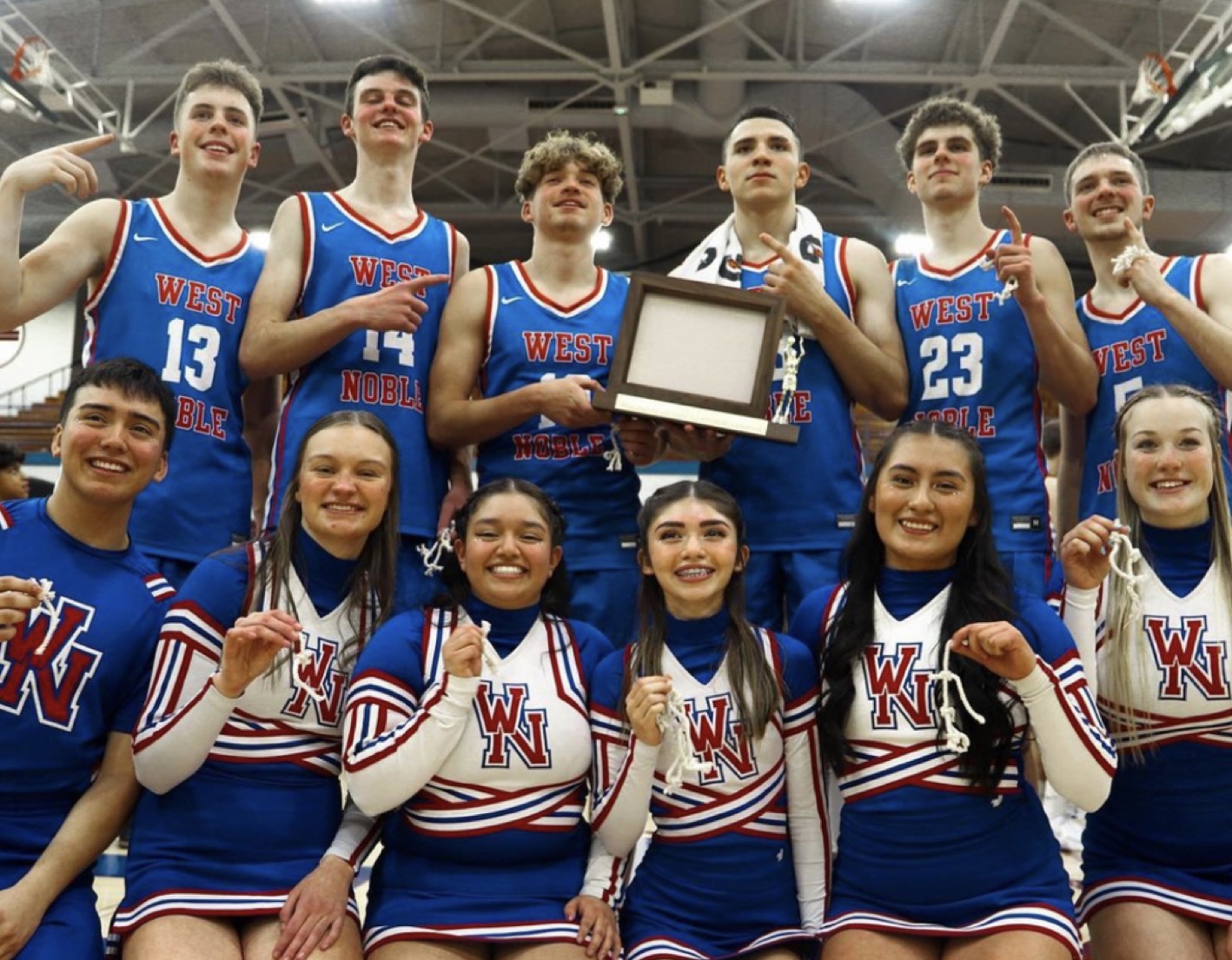 Coming off of last week’s strong showing in the NECC Boys Basketball Tournament, conference regular season play resumes tomorrow where West Noble hopes to stay in ahead of the pack following their 62-58 win to knock off the 2-time defending tournament champion Central Noble Cougars.

Here are some key games to watch for this upcoming week.

Angola is going through yet another difficult stretch of games where they’ve lost four straight. Of their 10 losses, half of them have come by single digits. But in their last game vs DeKalb, Angola led 20-6 after the first quarter, but they couldn’t make shots and DeKalb and Alex Leslie caught fire in the second half to preserve a 67-54 Barons win.

Angola does have a solid core of starters led by Dane Lantz, who is averaging 11.4 points per game. In fact, in his last 2 games, he’s averaging 24 points per game, which includes his 28 points vs Westview in the NECC consolation round.

Tyler Call has stepped it up in Lane King’s recent absence with a solid performance of his own on both ends of the floor, and Landon Herbert is having another underrated season this time as a senior. But as stated earlier, they’re without their impactful center Lane King due to an injury, and it’s a huge blow to Angola’s chances because he’s such a big, tough-nosed kid in the paint.

That type of player is definitely missing right now with Angola, so they’ll need to continue to play hard and take care of the basketball this week, especially against a Busco team that can surprise some people. Cade Ummel is definitely their most talented shooter as a junior, and Andrew Rapp can irritate opposing players with his relentless play to the net.

The biggest issue with Busco is can they defend the 3-ball well enough? While they had a better showing in the NECC tournament, they still give up a NECC-worst 69.2 points per game.

However, the rosters look quite different since the last time these two met. Gabe Trevino, Connor Essegian, Owen Willard, Ryan Schroeder, and Logan Gard are all now College athletes at their respective sports, with Connor notably playing on the Wisconsin Badgers aka CE3!

Both teams have had their ups and downs to this point, but it seems like both are starting to head in the right direction. For CN, they had an excellent conference tournament, which has helped them win 5 of their last 6 games after starting the season 3-3. The Cougars have found a different method to winning games this  season, and that has come through a “team-by-committee” effort, and playing a much grittier type of defensive ball, all while continuing to emphasize in spacing the floor, shooting the ball well, and getting out in transition.

Early on, it was Drew Pliett and Isaiah Gard making first impressions to guide through the struggles from the first month and a half of the season. Then we saw some signs of breakout performances from Sam Essegian. Then, it was Redick Zolman showing the Red-Dawg mentality for this young CN squad. And just last week, Conner Lemmon played the best week of games in his career averaging 15 points per game in that tournament.

If the Cougars can get everyone buying in and playing consistent basketball at the same time, CN is still very much a contender, and it showed from their sample size of games against Westview and West Noble.

The concern with this team is: consistency. It’s a team that has the potential, but its always a hard group to predict because they don’t always play consistent basketball, and that’s my explanation to some of their struggles.

The keys here are winning the war of attrition on defense, taking care of the basketball, and staying composed emotionally. Bentley Ball will be prepared to add a few tricks on their sleeve to contain CN’s star talent. However, inexperience is Eastside’s biggest concern right now.

The greatest rivalry in the history of the NECC. Whenever these two square off on the basketball court, you know it’s about to go down. Separated by 25 min apart, these are the two winningest basketball programs in NECC history with rich tradition, excellence, and hardcore fans.

The Warrior Dome is the crown jewel of NECC gyms. It’s located in the outskirts of Topeka and Emma..nearly 3,000 die hard fans enter through the halls of yesteryear’s success… and packing the stands. When the game tips off tomorrow night, it’ll begin with an ensemble from Dan Byler, embracing his role as “The Westview Whistler”. And when you hear that loud whistle leading through an orchestra of chants, it will send chills down your spine.

Tonight, there should be no reason this gym can’t be close to a sellout. Derek Hinen is coaching these Falcons to play extremely hard led by Tyson Frey and Noah Mast. Westview is having another solid season led by Head Coach Chandler Prible. Brady Yoder is having a breakout Senior season averaging nearly 20 points per game.

Coming off their first NECC Tournament Championship since 2014, West Noble hopes to continue their winning ways at the Steel Cage against a solid Fremont program.

Now they’ll take on a team that plays a different style of basketball. While both teams do run some form of a motion offense, these two teams play different styles. West Noble is a team that can slow it down, but also have the ability to attack the paint, where Fremont is a team that centers their offense around floor spacing and perimeter shooting.

With this matchup, you’re getting big-time marquee players with West Noble’s Austin Cripe and Bradyn Barth, and Fremont’s Ethan Bontrager and Conner Slee. The big question with West Noble comes with the fact this is their first game since the NECC tournament championship game nearly a week ago…rust could be a factor in this game??

However, when you have a team with Austin Cripe on the floor, it’s hard not to say WN is still the favorite. Cripe is coming off a 33-point performance in the 62-58 win over Central Noble in the NECC tournament championship.

As for Fremont, my biggest concerns are simply consistency and limiting turnovers. This is a team that when they’re on the same page and simplifying their game with sharp passing, it’s a lethal offense against any team. However, this is a team prone to get on cold spells, forcing plays that don’t need to be forced, and committing quite a few turnovers.

These are issues because Fremont doesn’t have a true post player in the 5 slot. It’s essentially a team full of guards and rotating pieces that can shoot. That’s fine as long as they can make their shots. None of them can truly play the role that Logan Brace had because none of them play like Logan Brace did during his Fremont days.

On paper, you think CN will be favored. That’s what the records want you to think. Remember this is a SAC team we’re talking here, and Northrop is no pushover regardless what the record tells you.

Nothrop, a lot like CN, has a balanced offense, that can give you a diverse set of styles that frustrate opposing defenses. Central Noble rarely schedules SAC teams, especially those that have a lot of athleticism. Northrop has a stud on this team in 6’7 senior Dalman Alexander who is averaging 15.8 points, 8.5 boards, and 2.6 blocks per game on 47% from the floor, 37% from 3, and 69% from the FT line.

In fact, when watching Alexander play, Alexander has scored in double figures all season long, he already has FOUR Double-Doubles (FOUR!!), and was a block away from a triple-double against New Haven. Plus, they have a bucket in Jayden Schmenk whose averaging 10.6 points and 2 assists per game. So, while Northrop is very inexperienced and don’t have a ton of depth this season, their starters are quite good.

I can tell you as someone that covers the NECC, Central Noble 1,000% doesn’t have a 6’7 kid that averages close to a double-double and blocks 3 shots per game. So, that means CN will obviously have to box out well and play strong defense. Therefore, they need that state finals experience and that scoring depth to come in handy.

As good as Drew Pliett is, I do have concerns with how he’s going to showcase his wizardry with his penetration and shooting ability with THIS Northrop defense. Conner Lemmon is coming off a strong conference tournament. Could that renewed confidence help him gain a spark with his perimeter shooting.

But the big matchup for me comes down to Isaiah Gard, not just because he’s the Cougars’ top option in the post, but to also contain Alexander. If CN can have a decent lead early, maybe they have a shot. It’s a tough opponent to test the Cougars, and I must appreciate their willingness to play these programs.