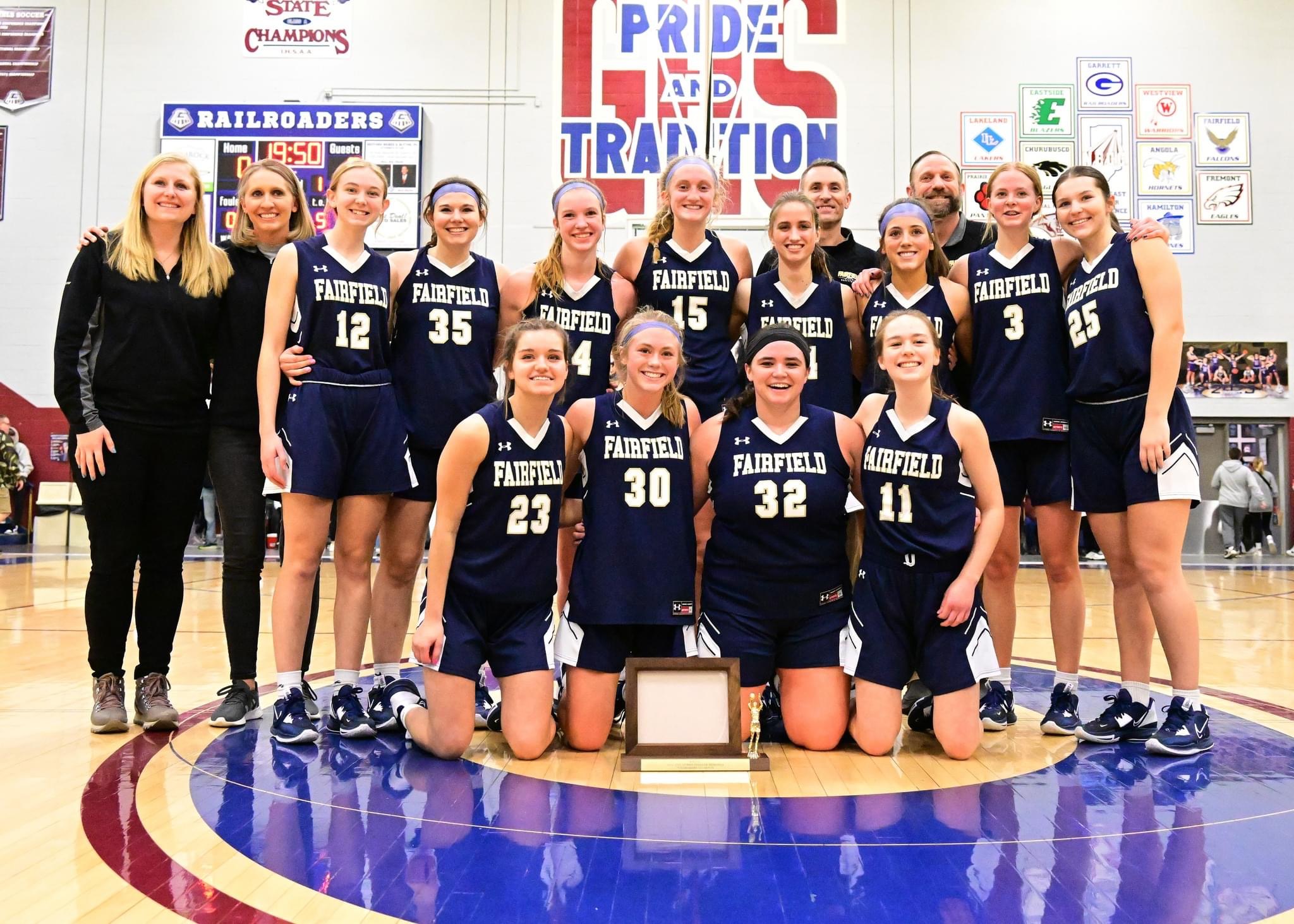 We are guaranteed 2 more weeks of regular season basketball before the state tournament begins. The NECC tournament always lives up to the expectations, and that was the case this season.

After 27 years of waiting, the Fairfield Lady Falcons (pictured above) brought home a conference tournament championship for only the second time ever as they beat previously undefeated Central Noble 56-42 behind Morgan Gawthrop’s 23 points and 4 3’s. Brea Garber joins her mom (Assistant Coach Amy (Bechtel) Garber) and dad (Head Coach Brodie Garber) as NECC Basketball Tournament champions in the Garber family.

Now can Fairfield win the NECC regular season title or will CN/Eastside respond?

Before we even get to Wednesday, we already have a Game of the Week within the NECC. Fairfield @ Central Noble at the Jungle. It’s hard enough to win on the road, it’s hard enough to beat the same team twice. But when you have to play that same team on the road literally THREE days after the conference tournament championship game, you know this is a huge game.

Historically, teams that go to the conference tournament championship game struggle in their first game back to regular season play. Fairfield shot the ball exceptionally well Saturday night and gave CN little room to score inside.

Their zone defense slowed the game down to a level the Cougars usually don’t play through and that defense won them a championship. Despite being down 8 in the 3rd quarter, Fairfield held CN to 7 points the rest of the night. And remember Brea Garber is very capable of taking over games at any time offensively or defensively. That’s why she’s heading to Indiana Wesleyan for basketball.

Now the question becomes, can that defense respond again? This is basically a sectional game without it being a sectional game. Both teams know each other, and they don’t play anyone else tonight other than the same exact same opponent. Can the Cougars bounce back and get some offense from across the court? And Can Fairfield contain Vice and Kiebel for 2 straight games?? They’ve done it before, maybe they can do it again.

But I cannot stress enough, it’s hard to beat the same team twice.

On paper, Lakeland will be a heavy favorite in this game. Since losing four straight from Dec. 9-17, Lakeland has won 5 of their last 6 games. Their lone loss in that span was a 67-57 OT loss at Eastside.

Peyton Hartsough had one of her best games of her career dropping 27 points in that defeat. The future Huntington Forrester is currently sitting at 963 career points as she looks to join four other Lakeland girls, including her sister Bailey Hartsough, on the program’s 1,000-point club.

If Busco is going to keep this close, they must do a better job taking care of the basketball. They officially had 31 turnovers in their conference tournament opener against Eastside and shot 32% from the floor.

This is a rematch from last Friday’s tournament semifinal game at Eastside where CN won 59-37 behind Madison Vice’s 27 points.

Despite a solid performance out of their players including Sydnee Kessler and Paige Traxler adding 10 points, Grace Kreischer struggled with foul trouble (she was fouled out in that game) and scored just 4 points in the process. It’s like I said before, if Eastside is going to go far in postseason play, they have to sustain solid offensive flow, take care of the ball, and stay out of foul trouble.

Grace Kreischer is way too important on this team on both ends of the floor, especially in a game that features a physical CN defense that can run the 1-3-1 and a good trap. Now they have to put their best effort in front of a tough Central Noble crowd. Rebounding is a must in this game.

On paper, this should be an easy win. That’s what some fans thought when Westview drew West Noble in a quarterfinal round, especially coming off a 26-point win over that same West Noble team. But that’s why it’s so hard to beat the same team twice.

West Noble was motivated in that tournament game and shocked Westview 40-29 off of 19 points from Mackensy Mabie and 12 from Alexia Mast.

The one area West Noble is decent enough at to compete with Garrett is their rebounding. In 3 of their last 4 games, West Noble is consistently grabbing 29 or more rebounds per game.

Garrett averages 31.4 boards per game, but they only shoot 32% from 2 and 23% from 3. If Garrett wants to avoid the upset, they need to make the most out of their opportunities. Garrett has shot 40% or better from the floor twice all season.

Meanwhile, another future Huntington Forester, Bailey Kelham, has found her place on a historic pace. Currently sitting at 1,579 career points, Kelham needs 154 over at least the final 5 guaranteed games to become the school’s all-time leading scorer regardless of gender.

It’s the 2nd and final Steuben County Brawl of the season for these two programs as Heights and Fremont look to settle the score in their conference races.

Believe it or not, this is Prairie Heights’ last conference game as the rest of their regular season schedule are non-conference opponents. So, this is a good way to prepare them for a difficult sectional.

For Fremont, momentum is something they have, and some of this surprised success comes from Addy Parr and Natalie Gochenour. When Parr is scoring 20 or more points, Fremont is 4-0 in these games. That includes their last two games where Parr averaged 25.5 points in that span (50-42 win over Heights last Thursday, and 44-43 win @ Canterbury just last night).

As mentioned earlier, Fremont and Heights have already played each other from the NECC consolation round. And because the fact Fremont is now a 2A school, they could meet up to three times this season.

In their first meeting, Fremont shot 50% from 3 and generated 29 boards.