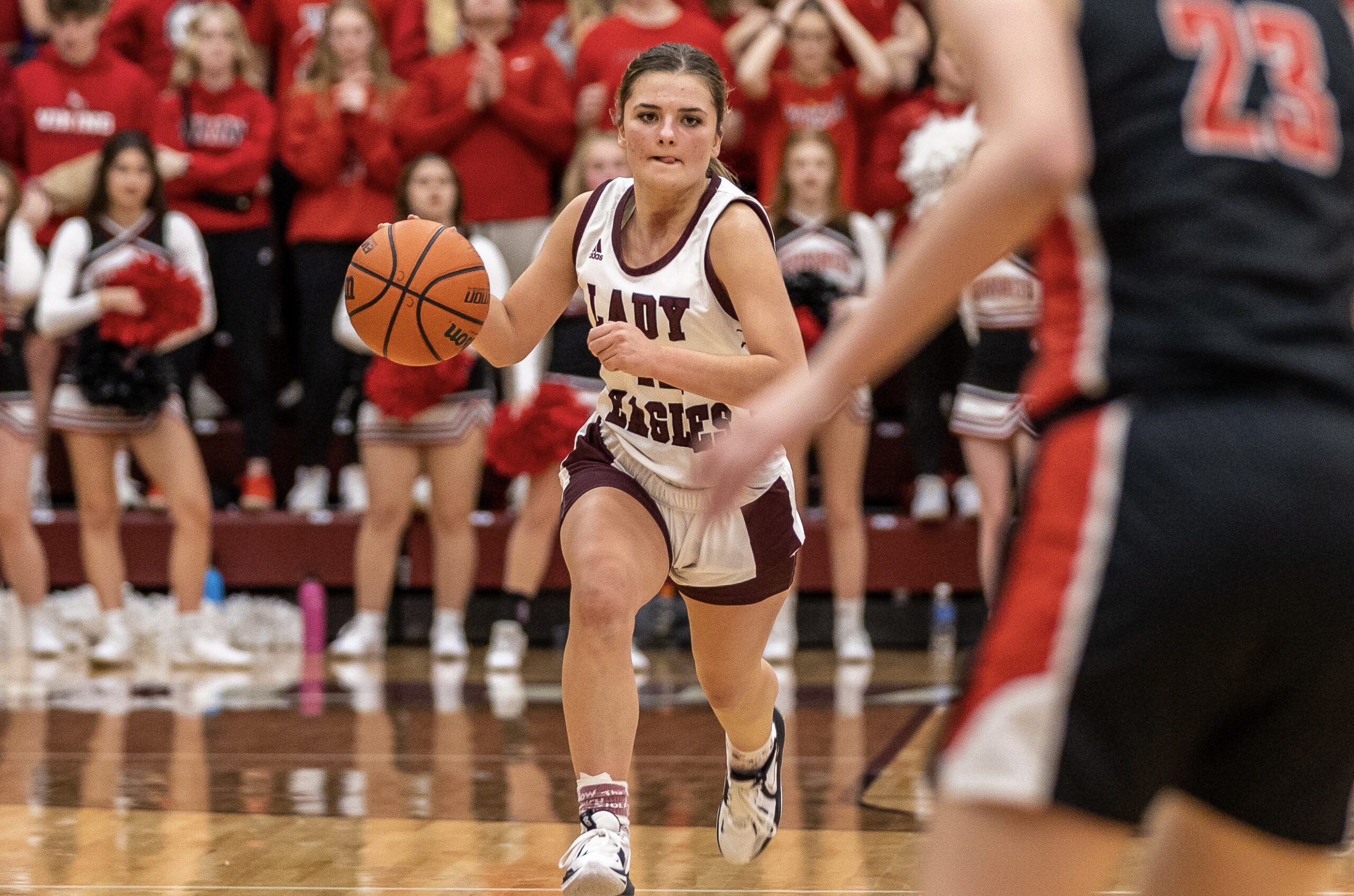 The NE8 race is about to reach to its climax. This week is the climax week of the NE8. Next week is the resolution to what has been an intense and exciting year for NE8 Girls’ Basketball.

The madness continued last week, where several key games went down to the final play of the game. Let’s start with the Bellmont Lady Braves, who were tasked to play the Big girls of the 260, the Northrop Lady Bruins. Bellmont LED in the 4th quarter on the road. And while they ended up losing 53-44, that felt like a win to me because they needed to prove that they’re not scared of anyone.

Bellmont nearly pulled off another thrilling win over Norwell, but they couldn’t hold onto a late lead, and Norwell rallied back. Kennedy Fuelling’s 25 points was the difference maker to a 46-43 win.

For Huntington North, the biggest trap game was playing the Wayne game shortly before the Columbia City game. While the Vikings won that game, they had to earn every single point to a 47-42 hard-fought win.

And of course the best was saved for last as Columbia City and Huntington North fought to the bitter end. Kyndra Sheets scored the Eagles’ final 6 points on her way to a game high 21 points and a huge 41-39 win.

Can the Eagles stay unbeaten this week?

Last season, this was one of the better games of the season where Garrett won a close one at Bellmont. While Garrett should have some talent to compete with Bellmont, the challenge lies in finding any kind of consistency from beyond the paint against one of the area’s stingiest defenses.

This is one of those games that may need a 40 or 50 burger from Bailey Kelham. But that simply isn’t all that realistic when considering the track record of Bellmont girls basketball. They’ve held 12 of their opponents to less than 40 points. Even when they gave up more than that, they were in thrilling games against Jay County, Columbia City, Norwell, and Northrop.

I have a very hard time finding a strong likelihood that a team as well-coached as they are under Bob Lapadot can slow down a motivated Bellmont squad that’s battle-tested.

If you’re looking for the best value of entrainment in the 260, I would advise you to find a different game that’s not this one. But if you’re just wanting two scrappy teams fighting for a win, this is your game.

These are two EACS rivals who have struggled to win games this season. For Heritage, it’s been a rebuilding season from day one coming off a solid 2021-22 season that was followed with a depleted roster based on varsity experience.

For New Haven, it sort of feels like a yearly thing to say that the Bulldogs struggle to sustain consistent success. But when you field a team that are mostly consisted of freshmen, this is no surprise. I guess if you’re going to takeaway anything these days from them, the Dawgs did show some character in a 38-35 loss to Leo. And junior Janiya Johnson is 6th in the NE8 in scoring at 13.8 points.

I completely understand the Eagles should not look past this game by any stretch. DeKalb is having its best season in over a half a decade. No one should consider them as a easy win.

However, the Barons have yet to prove that they can consistently compete with the big girls in the area. Against highly successful teams, the Barons are 1-5 in those games. In those 5 losses, they lost by at least 13 points (and a lot of them were BRUTAL). The one game they managed to win was a 38-35 comeback win over county rival Eastside.

Now to the Barons’ credit, they’re on a roll right now with wins in 5 of their last 6. Ashley Cox and Lillie Cone are back to their early season momentum on offense and Delaney Cox is starting to pick it up on both ends with postseason form. If DeKalb can get hot from 3, which they’ve shown that is doable, they’ll hang around early.

But this is Columbia City, and they’re a juggernaut for a reason. Sophomore Addison Baxter is still Addison Baxter no matter the stat lines. She averages 18.7 points per game (2nd in the conference), but she was held to 6 points against the Vikings. At the same time, though, she grabbed a game high 8 rebounds. That’s the sample size of how impressive this kid is.

Junior Molly Baker had a near double-double including 20 points against Wawasee. And the hero of the Huntington North game, Kyndra Sheets (pictured in the cover photo) was ice in her veins. Knowing the significance of the long-standing rivalry, Sheets embraced the challenge with 21 mammoth points against a great Vikings team and led the way by example in a gritty win.

I know Columbia City wants me to stop talking about 1996 being their last outright conference championship. For that to happen, then they must finish what they started: go undefeated. They shouldn’t take the Barons lightly, but knowing how hard this opportunity comes, I don’t see a letdown on paper.

Man, I cannot wait to preview their sectional in a few weeks. Columbia City, Wayne, Homestead, Huntington North, AND possibly some South Side magic?? Oh my Oklahoma!

Where do I start here?? Just when I think I know this Leo team, they keep finding ways to make everyone think harder…just look at their weird run of streaks.

Leo’s 7-2 when Leah May is shooting 40% or better from the field. They’re 4-1 when Schott has 8 or more rebounds, and they’re 7-1 when they grab 30 or more rebounds in a game. That’s when Leo plays their best basketball. The issue is when you have young teams like this one, they don’t always play to that level.

Historically, Leo struggles against East Noble as they’re 3-4 against the Knights since joining the NE8. Even in last season’s matchup, Leo only beat EN by 5 points in that game 36-31. In fact, it’s been 5 years since Leo beat EN in consecutive meetings.

If Leo is going to win this game, they must out-work EN’s gritty defense and they must contain their perimeter shooting led by senior Bree Walmsley and junior Bailea Bortner.

This is easily the game of the week for NE8 girls basketball as the two stingiest defenses square off at Bob Straight Court. Both teams are coming off heartbreaking defeats in conference play.

This feels like one of those games that a role player out of nowhere is going to be the hero. These are two teams that are capable of playing different styles of basketball, especially on defense. This is a game that will come down to their ability to force turnovers, crash offensive boards, control possession time, and sharing the basketball.

This game could come down to the final seconds as it usually does. Marissa Trout, who’s having a breakout sophomore season, knows a thing or two about game-winning buzzer beater shots. Taylor Double only needs about 10 points to become the Vikings’ newest 1000-point scorer.