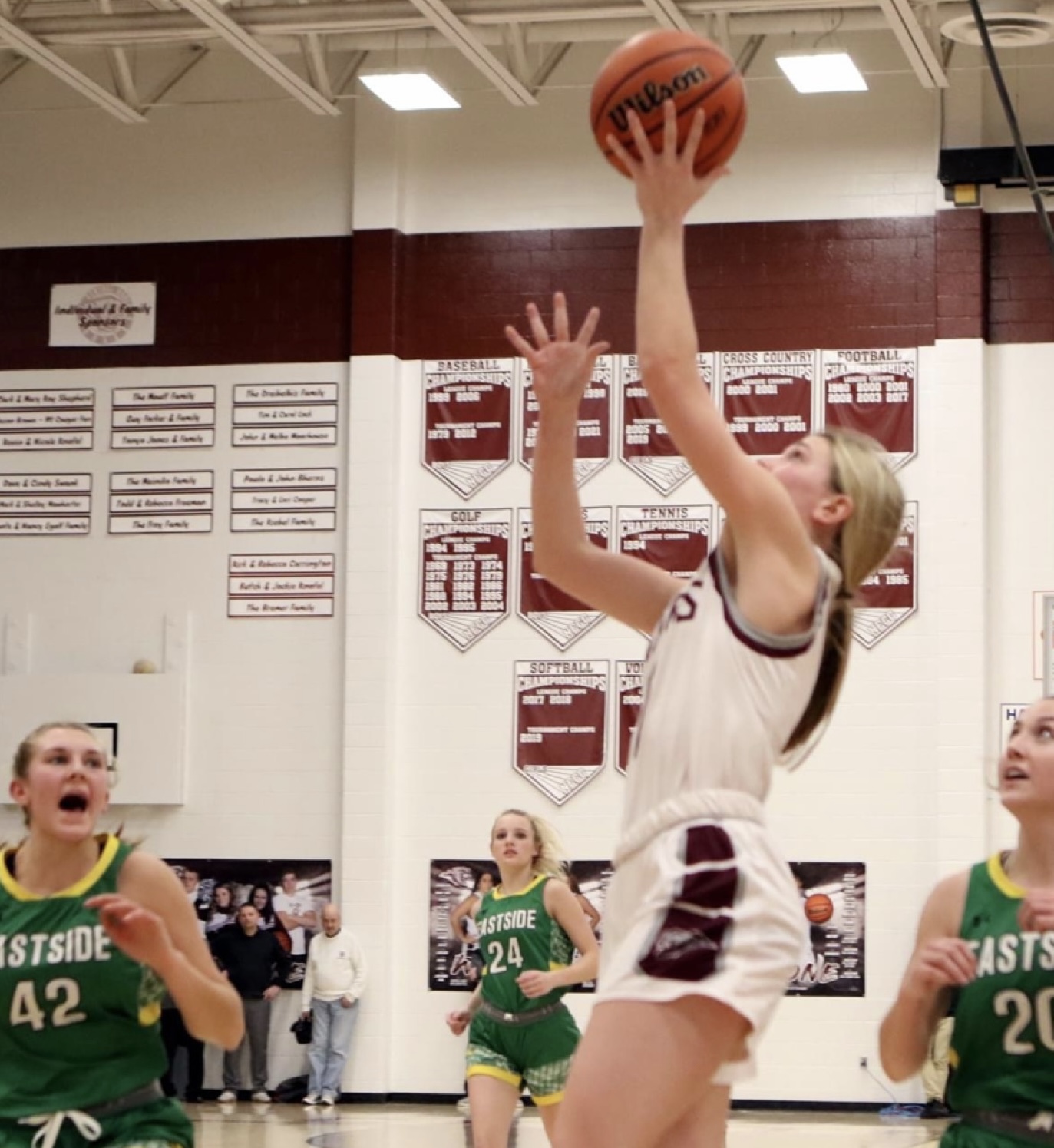 We are down to the final week of the regular season for girls’ basketball as conference races start to conclude, and everyone prepares for next week’s state tournament. Sectional draws were announced Sunday night, so now everyone knows where their journeys stand when the postseason tips off exactly one week from tonight.

In the NECC, Fairfield looks to put this NECC title race to bed with a win over West Noble Friday and claim their first conference regular season championship since 2018. At this point in the season, I am not going to go too much in-depth since the real storylines will be discussed during sectionals’.

This was originally scheduled to be played in November, but here we are on the last week of the regular season. The Lady Braves snapped a four-game losing streak Saturday with a 47-36 win over rival Lakewood Park. Overall, while they are generating 46 points per game, this is not a very consistent team heading into sectional play.

With the Braves, they’ll need to establish a physical presence inside and get more stops defensively if they want to defend their sectional title in 1A 51, beginning with the Bethany Christian game a week from Friday. Eastside also hopes to enter postseason play on a high note following a hard-fought 44-37 loss at Central Noble last Friday.

The Blazers also average around 47 points per game but only allow less than 40. Last week saw a huge double-double performance from Grace Kreischer, where she had 28 points and 13 rebounds in the 56-37 win at West Noble. Defense and discipline are key to repeating as a sectional champion next weekend.

However, given the height advantage and better all-around shooting, I will give the edge to the Kelly Green and Gold!

The Battle of Noble County in the Big Blue Pitt will have two rebuilding programs looking to conclude their regular seasons on a high note. Following a pretty decent NECC tournament run, West Noble is playing their best basketball of the season.

In their last two games, West Noble has seen them only losing by less than 20 points, which included West Noble having a 2-point halftime lead on Eastside before the Blazers came back to win that game. For the Lady Knights, their schedule has not been kind this year, and it reflects on the competition they have to play to get ready for a brutal sectional at DeKalb next week.

However, last week was EN’s best week since the first week of December, where the Knights snapped a 10-game losing streak with a 48-34 win at Prairie Heights, led by Payton Quake’s 16 points.

This week will be a home-feasted week for East Noble as they look to honor their two seniors with at least some success this week. This is East Noble’s best chance to come away with a win before the start of postseason play. The key factor will come down to which teams can get some offense from beyond the paint, and which team can out work their opponent the best.

Barring some winter storm cancelling events left and right, Fremont and Lakeland will look to salvage the rest of their conference schedule in preparation of sectional play.

Let’s start off with the surprisingly competitive Fremont Lady Eagles, who have won three of their last four. After a dramatic 44-43 win at Canterbury, Fremont had to pull off more late-game heroics Saturday at Brushy Prairie to come away with the 50-43 win over the Lady Panthers.

Since starting the season 0-6, Fremont is 8-6…..That is definitely going to get some respect amongst fans and the media alike. The key factor with Fremont is “Can they make enough baskets?” Because when Fremont scores 43 or more points, they are 7-0.

Despite Lakeland’s recent success, they allow the fourth most points in the NECC at 45.3 points per game in a conference dominated by strong defense. The roller coaster ride of streaks continues for the Lakers. Since Dec. 29, Lakeland is 6-1 overall, with their lone loss coming in overtime in the NECC Tournament Quarterfinals.

That is after the fact Lakeland had previously lost five in a seven-game span. Again, Lakeland’s success is paramount to how well Peyton Hartsough, Alivia Rasler, and Olivia Oman perform as a trio. In fact, Lakeland is 4-1 in their last five games when shooting 40% or better from the floor.

Peyton Hartsough needs just 11 points to become the program’s newest 1,000-point scorer, and it would be fitting to have this done on senior night in front of the Lakeland faithful. I say the Lakers get it done for the seniors.

The Battle at Baseline is one of the NECC’s best rivalries, despite the recent meetings being a very one-sided rivalry…I will let you guess who’s had their number these days.

For the Lady Cougars, after facing their first true dose of adversity of the season against Fairfield, the Cougars got a much-needed boost Friday as Madison Vice’s 16 points and 9 rebounds (a triple double threat), and strong team defense led to a nice win over Eastside.

Given the fact they will head into the state tournament as favorites in 2A 35, which they will host this year, you want to start to play their best basketball at the right time regardless of the opponent. This is a game they don’t want to let their seniors down: Madison Vice, Meghan Kiebel, and Abby Hile. For Busco, it is a young team, but man I just don’t have a good grasp on what we are going to see from this program moving forward. I know Brooklyn Sinclair is having a decent sophomore year. But I really felt the presence of the other kids cannot go unnoticed.

Hailee Gaerte and Kena Hamman have been nice seniors for a team that still needs to learn how to become a winning program with confidence. Gaerte had 29 points on 8-13 shooting from 3 in a 62-57 loss to Lakeland, before dominating Canterbury.

But who gets overlooked is Bridget Timbrook. At times this season, that combination of Timbrook of Sinclair had great chemistry…However, with Timbrook out, that greatly impacts your backcourt. Period. News flash: You’re playing Central Noble, one of the state’s best defenses.

The thing that should be a key focus for CN is taking care of the little things, stay aggressive on both ends, and getting the girls’ mindset in postseason form. As someone who grew up with this rivalry, I wish this was a solid game to talk about. That being said, because CN is very good at basketball this year, I have my doubts.

The NECC’s Game of the Week for girls’ basketball takes it to Paul Bateman Gymnasium where Garrett will be hosting their senior night against Lakeland. The top headline going into this game is the battle between two Huntington University signees: Peyton Hartsough of Lakeland and Bailey Kelham of Garrett.

Despite facing adversity with a difficult schedule, Bob Lapadot once again leads this program into playing their best basketball for sectionals. Raise your hand if you’re not surprised it happened again. I’ll go first: I am not.

Lately, we are seeing Maddy Schenkel, Emma LaPato, and Aida Haynes are starting to step up on both ends of the floor. And it helps that Kelsey Bergman is still doing her part in creating havoc as a 6’1 center. What is this program always known for? Lunch-pale team basketball.

Can Lakeland manage to generate offense despite having less size? This will require a great team effort, good defense, and winning the rebounding battle. This will be an aggressive game given the nature of these two programs. Despite averaging 48 points per game, I have some doubts on whether Lakeland can generate enough offense to pick up a huge road win.