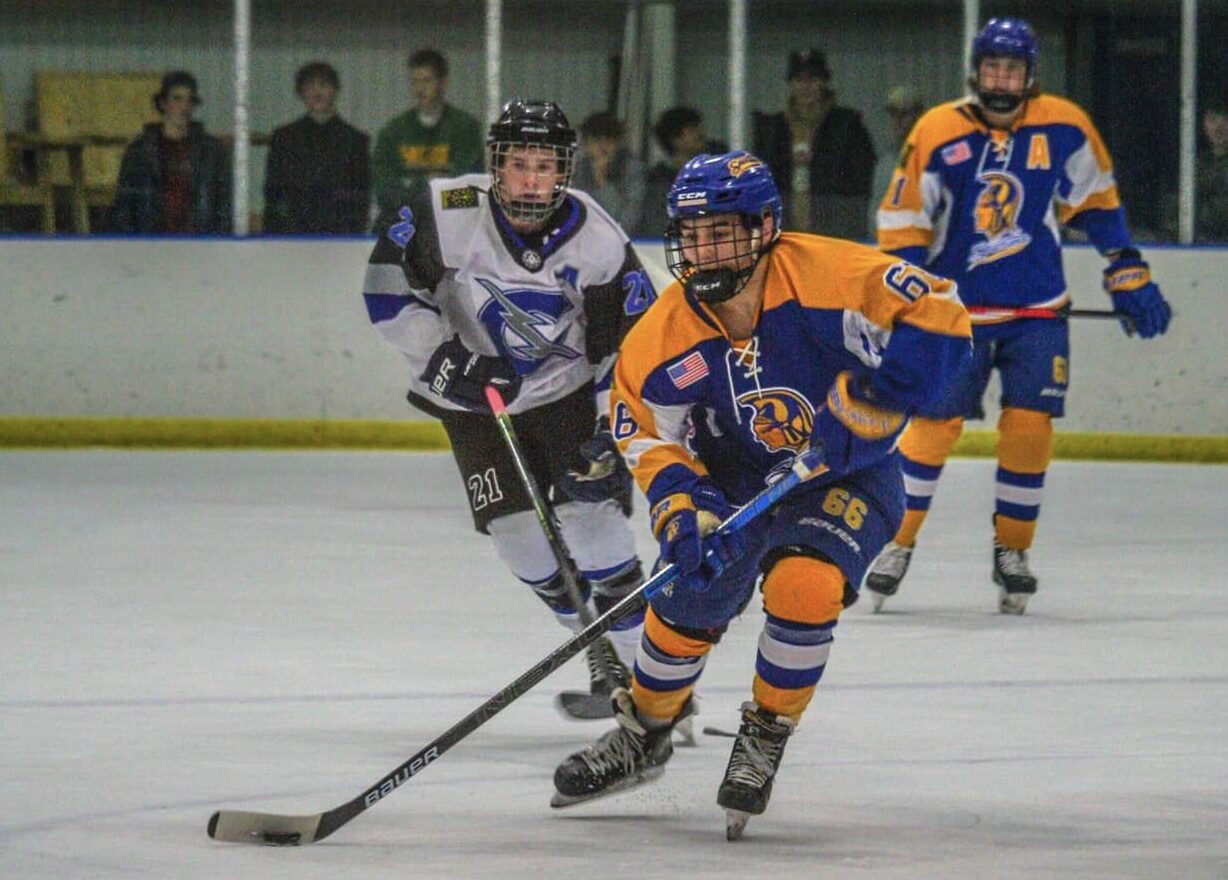 The First Semester has passed us by and we are now nine weeks into the 15-week regular season in Fort Wayne and Week 9 was surprisingly interesting which we’ll touch on down below. With life getting in the way a little bit and getting behind on these, we’re gonna do things a little differently this time and combine the power rankings with the last two weeks worth of recaps, and then we’ll of course have predictions for Week 10 at the end.

Carroll had arguably their toughest test of the season league-wise in Week Nine when they played the Vipers. The reason for that being that they were without two of their best players, Dylan Braun and Brody Burge. Burge was just a one-game absence due to a game misconduct and the subsequent suspension that he picked up the prior weekend during crossover games in South Bend. Braun on the other end is a much longer absence as he’s more than likely out for the remainder of city play, a crushing blow for Carroll and we’ll get more into that in a minute. With those two out it would have to be someone else to be the go-to guy for Carroll, with Gnau being the logical pick for that role. Another way to go with that question was to say Carson Carteaux would need to be the guy, he’s got a track record and sometimes a goal or two is all it takes. So how did it go?

It was an ideal start for the Chargers as they got on the board just 1:20 in when the Vipers lost track of Cupp in the slot and he buried a one-timer. The play was all set up with Gnau’s tremendous forecheck on the play, forcing a turnover that he centered for Cupp. With a short bench (they were also without Sam Phillips and Cam Shurek) and the nervousness of losing your top two scorers, that was a big goal for Carroll to get going. The Vipers were able to tie it up before the end of the period when Jackson Bertels was able to get a tip on the point shot of Christian Brown. Shots in the period were nearly even with the Vipers holding a one-shot edge. Fort Wayne threatened to take the lead in the second period with eight shots on goal but each and every one of them was stopped by Carteaux. Carroll were the ones to capitalize in the middle frame to take the lead. Secondary scoring came up big for the Chargers and it was in the form of Colsen White. White was a part of a two-on-one with Camden Drexler. A stellar backcheck from John Goodine appeared to break up the chance but Drexler stayed with the puck and fired a shot off Ben Marques and a quick reaction from White allowed him to put home the rebound. That would prove to be the difference maker in the goal column as Carteaux was stellar again in the third, stopping all nine shots to wrap things up with 28 saves on 29 shots, proving he was the guy for Carroll on that occasion.

Back on the injury front, one look at the scoring leaders’ page tells you all you need to know about how big of a loss Braun is for Carroll so it can’t go without a little discussion. He is their most dependable offensive weapon and has the unique ability to make something out of nothing almost at will. They’re still a very formidable opponent with him out of the lineup but it certainly puts more pressure on Burge to be that guy and Gnau to continue his current season trajectory. Finn Cupp will need to go from 1B scoring to 1A scoring to help offset the loss as well. Further down the lineup is where the real difference will need to come from I think. This is a great opportunity for the younger guys to step up and seize some of the extra playing time that’s available. White seems like a guy that could fill some more time. He was talked up in preseason and the eye test is favorable but in a forward group as loaded as Carroll is it’s hard to find the playing time he’d get elsewhere. Scheerer is a similar story but is already a little more prominent than White. With a long break, we could see the return of Dylan Carteaux but he’s been deployed at defense more in the past so that could be pushing it. Either way, it should be interesting to see how Carroll adapts. I still think they’re number one, it’s just not by the same margin.

Coming out of the break Leo has lost back-to-back league games for the first time this season and they won’t be particularly happy with it. As mentioned earlier they lost to Carroll 6-2 in Week Eight. They scored first but got Braun’d and fell down 5-1 before the 6-2 final. It could’ve been worse but Andrew Baumert stopped 18/19 shots in the first period to keep it just 1-1. The Lions wouldn’t score again until the third period when Jackson Rieth’s wrist shot from the point made it 5-2. Despite the score, it felt, at least at times, that this game was closer than Leo had been with Carroll in their previous matchups, and entering the New Year that gap should close even further.

Leo followed up the loss against Carroll with another loss the following week to previously winless Homestead. The first period was mostly even but like in their previous meeting, Homestead was able to score the opening goal. Leo fought back and peppered Homestead goaltender Connor Gould in the second period with 13 shots and some five-on-three power play time as well. Despite those advantages, the Lions were unable to find the back of the net and trailed by two going into the third period after a Spartan goal early in the second. The third period was more of the same as early Homestead penalties offered Leo a five-on-three power play, this time for over a minute, but Leo came up short once again. Shots on goal in the third were even at seven apiece but goals in the period favored the Spartans 1-0 as they took a 3-0 win for their first of the season.

That wasn’t the way Leo hoped to enter the Christmas break but nonetheless if there was a time for a couple of losses it might be when there are a few weeks to reset afterwards. That’s just what the Lions got when they return to game action against the Vipers they get a matchup that has been good to them so far this year and allows them a good chance to get back to their winning ways.

The third rotation came and went just as the first two did for them, bringing losses to Carroll and Leo but a win against Homestead. It was Week Eight when they were able to claim their win over the Spartans and it was powered by a pair of first-period goals from Logan Ormsby. Ormsby’s first goal of the night came when he was parked out in front of the Homestead goal and Jackson Bertels put a pass from behind the net onto Ormsby’s stick and from there it was an easy finish. The Vipers weren’t able to extend the lead in the second period and an early third-period goal for Homestead cut the lead to just a goal with 14:03 still to play. The Vipers were able to hang on though as Michael Scully added a goal of his own with 2:57 left that put the game on ice.

Next up was Carroll and this was a big chance for the Vipers to knock them off for the reasons mentioned in the Carroll section up above. Of course, it wasn’t meant to be though. The goal Carroll scored in the first 90 seconds was a tough one and at least to me it really pumped the brakes on the Vipers’ upset train. Despite the ice tilting in their favor they just couldn’t get enough pucks past Carteaux. A 17-6 advantage in shots on goal across the last two periods was about as good as the Vipers could’ve asked for but sometimes it’s still not enough. As with the start of every rotation, getting a win against Leo to start the second part of the season would be a great boost of momentum in the league for the Vipers but we’ll just have to see what happens.

Homestead fell short in Week Eight against the Vipers in a pretty even game. Both goaltenders finished with 18 saves but it was the Vipers getting the win by a score of 3-1. A goal from Gavin Elkins in the first minute of the third made it seem like maybe the Homestead comeback would be possible but Kam Clark was able to hang on in goal for the Vipers to take the win. Week Nine was the standout week of the season so far for Homestead as they were finally able to notch that first win. Hear me out on this part, I wasn’t totally caught off guard by it. The vibes in warmups seemed good and it was clear that the losses were starting to be incredibly frustrating for the coaches. It just seemed like time, despite the fact that my pregame prediction was way off.

Elkins was the first to score for the Spartans with 1:04 left in the first period when he wired a wrist shot to the back of the net shortly after a Homestead power play got underway. It didn’t take long for Homestead to double the lead as 32 seconds into the second period Aiden Byler delivered a goal, yet again on the power play. This was a particularly excellent goal as Byler skated the puck down the left wall, cut into the slot, and had the patience to wait for the right shot and bury it. Connor Gould was able to survive the onslaught of Leo shots to keep the zero up on the scoreboard through two periods having made 19 saves through the first 30 minutes. Homestead scored again midway through the third period to make it 3-0, this goal from Drew Brimner. Brimner inadvertently blocked a shot from Byler and when it dropped to the ice he was able to slide it past Baumert. That would be the lone goal of the period and when the final buzzer sounded Gould had solidified a tremendous performance, a 26-save shutout, and Homestead’s first win in league play.

The Homestead team that showed up that night against Leo, and has flashed at times this year, is a team certainly capable of winning games as they showed. It’s just a matter of producing that for 45 minutes each week. A big part of that nowadays is Gould. He has been really solid for them and is no doubt their number-one goalie. If he can continue improving he could be the difference for Homestead making some noise as the season reaches its last legs.

Not a good run the last time out. I mentioned my picks on the broadcast since I didn’t have them written out here but I picked the Vipers and Leo. Those of course were both wrong and I’ll have to issue an apology to Homestead because I picked them to lose that game 5-1, that obviously didn’t happen. I guess now I’m the one who needs to get back in the W column.

If Homestead can look like they did against Leo the rest of the season that would definitely spice up the last six weeks. Carroll will get Burge back for this game but they’ll still have to adjust to life without Braun which shouldn’t be an issue here.

I really don’t have anything to say here. Leo bounces back and does what they’ve been doing most of the year.