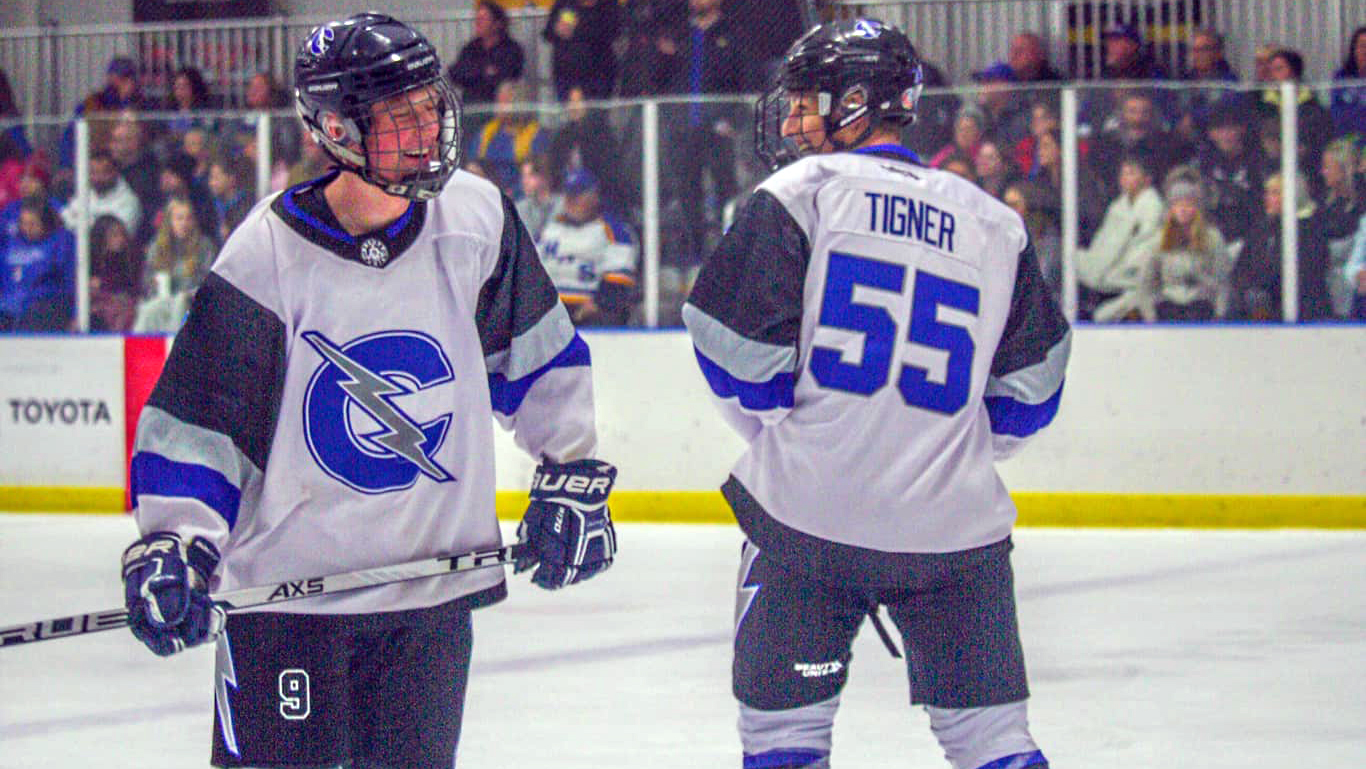 Back from the winter break and we came back with a bang. A pair of good games on Wednesday bode well for the rest of the season and definitely got the juices flowing again after the long layoff.

Carroll was yet again running with a different lineup with Colsen White, Adlee Scheerer, and Finn Cupp coming out and Brody Burge coming back in along with JV call-up Evan Brenner, replacing Renegades teammates Colton Franks, Will Lalonde, and Harrison Fiedler who played with Carroll in Week Nine. This game was off to a physical start with multiple big hits early in the game that went unpenalized as the officials let the game play out. It took all of five minutes before the referees decided it was time to start tightening things up as coincidental penalties at 4:42 led to three more penalties late in the first period and another pair of coincidental penalties after the buzzer sounded. The period ended without any goals but it didn’t take long for the red light to go off in the second as Sam Krauhs scored 17 seconds into the period with the Chargers on a 5-on-3 power play and only 31 seconds after that Cam Drexler made it 2-0, still on the power play with time left over after the 5-on-3.

Not to be outdone was the Homestead power play unit. After an elbowing penalty to AJ Baldwin at 2:03 the Spartans cut back into the Carroll lead with a power play goal of their own. Drew Brimner was able to rip a shot past Carson Carteaux from the right faceoff circle, capping a three goals in three minutes span of play. The goal-scoring and penalties cooled off through the middle part of the period but the last six minutes of it felt like the critical part of the game. A penalty to Andrew Litwinko resulted in another Carroll power play goal, this one from Burge who finished the play before getting taken to the ice by Gavin Elkins. A short time later Burge found himself in the penalty box after taking a retaliation penalty as some frustration boiled over from the Spartans repeatedly throwing checks his way. His teammates bailed him out and killed off the penalty and Burge rewarded them by scoring his second goal of the game after coming out of the box, leaving 1:43 on the clock before the intermission. Another penalty to Baldwin would be the last entry on the scoresheet for the period and some of that time carried over to the third period.

That would be an important factor as the Spartans would be on the man advantage to start the third with a chance to come out of the gate and get some momentum, but instead, it was the opposite that occurred. Burge gathered up a loose puck at the top of the Carroll zone and while turning around Cameron Hurley tripped which opened up the ice for Burge who carried the puck in, cut into the slot past Aiden Byler and sent a shot past Connor Gould for a natural hat trick of three goals all in a row. Adding an extra layer to the hat trick was the fact that Burge scored each goal a different way, with a goal apiece of each side of special teams and one at five-on-five. Homestead tried but in the end couldn’t make up the deficit, losing by a final score of 5-1. Carteaux put in another solid effort for the Chargers in goal-stopping 29/30 shots.

Following their first back-to-back losses in city play this year the Lions were on the prowl early and struck first. After his initial shot caused a scrum in front of the net for a rebound Dylan Davis was able to get back to the puck and swept a backhand shot into the net for the early lead a little less than halfway through the period. Despite the goal, the Vipers were peppering Andrew Baumert in goal and tallied 11 shots to just six for Leo. As opposed to the first game of the night, penalties weren’t a factor in this game but there was an unsportsmanlike conduct penalty assessed to Nick Vanryn after time had expired in the first period. The Vipers were able to kill off the minor penalty and continued pressuring Leo until finally, they were able to break through with what is almost a lock for goal of the year. A few have tried but Darcy Koch was the first to pull off the lacrosse goal in a live game, and it was a slick one to boot. Instead of being stationary and going for it, Koch was skating behind the goal and smooth as butter picked the puck up on his stick and stuffed it just over the shoulder of Baumert into the smallest of gaps. That moment pumped a bit more life into the atmosphere and drew the Vipers even, setting up a great third period.

The Vipers vaulted into the lead with the go-ahead goal as Cam Whisler stole the puck from Tyson Finefrock behind the net and stuffed the puck in from the side of the goal before Baumert could fully react. The good vibes were short-lived though as just a few minutes later Leo tied the game back up. Leo was able to get the puck out of their zone on the penalty kill and cleared it all the way down but everything went awry for the Vipers when Ben Marques and Jack Backstrom weren’t on the same page as to who was going to make a play with the puck. Marques appeared to want to stop it for Backstrom but played it to the wrong side which allowed Weston Roth to swoop in and capitalize on the miscommunication for a short-handed goal. After that equalizing goal, the Vipers continued pushing to regain the lead but yet another unfortunate break led to a Leo goal. For starters, Jackson Bertels was tripped at the top of the offensive zone which cost him control of the puck so play should’ve stopped right there, nonetheless, it went uncalled. This allowed JJ Scott to sweep the puck out of the zone and all the way on goal where Marques misplayed the puck again, this time under serious pressure from Roth who came flying in. Marques’s attempted pass hit off Roth’s shin pad and bounced out to the slot where Scott scored what ended up being the game-winner. The rest of the game didn’t come without some stress for Leo though. After the Vipers were able to get Marques out with 1:26 to go they had a few chances that were either stopped by Baumert or blocked by Leo skaters as they were selling out to secure the win. In the end though it was all for naught as the Lions walked out with another win on the back of 34 saves from Baumert and a couple of costly mistakes at the other end for the Vipers.

The score is obviously a joke, that should under no circumstances be taken seriously, and is meant to appease the Carroll Chargers who were quite upset with me for picking them to only win by one last week. Prayers to those gentlemen during their tough time. *Checks standings and scoring leaders*. Anyways. In all seriousness as I did last week I foresee another Carroll victory.

I think we’re gonna see a lot of physical play in this one. Homestead hasn’t shied away from that style lately and it’s working for them most of the time. The Vipers also have guys that can play that way and no doubt they’ll be looking to avenge last week’s loss so they should come out with some intensity.