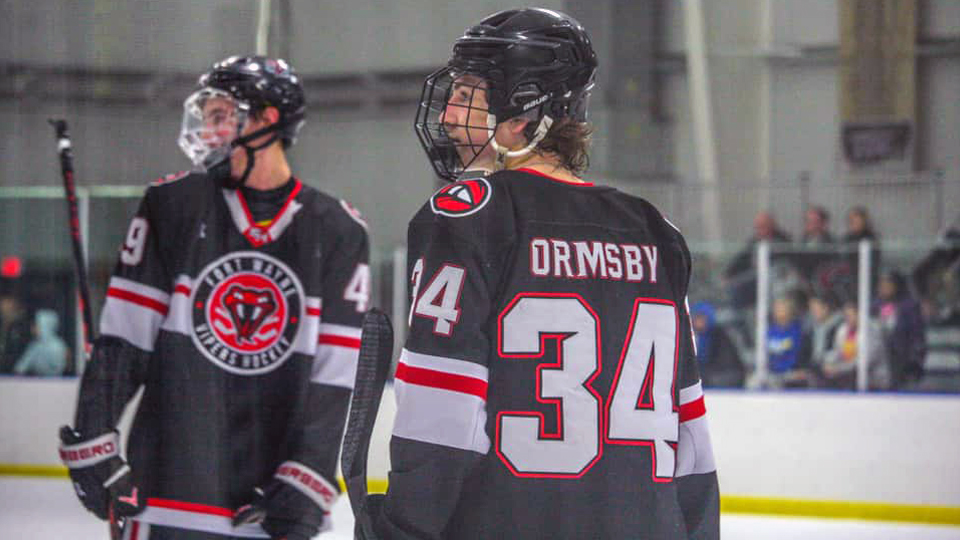 Moving into the third rotation of games there’s a pretty good sense of how these games are likely to turn out, but as each team progresses over the season we can start to see shifts based on their development. Did we see any of that Wednesday night at the Icehouse?

To add some extra spice to this game we got word pregame that there would be a couple of JV call-ups for the Vipers. The additions were Colton Franks and Will Lalonde. Franks, a Freshman, is tied for the Renegades scoring lead with 11 goals and ten assists through 14 games for the team. Meanwhile, Lalonde is in his Junior year and is third on the team with 19 points, 13 of which are goals. While the Vipers had the subs, it was actually Leo who had more regulars out of the lineup. The Lions scratched Hudson Roth, Weston Roth, Tyson Finefrock, and most importantly Andrew Baumert for a second straight game. With that the stage was set and the Vipers came out of the gate hot but that initial flame was quickly extinguished with a goal from Colton Calhoun at 2:18. Calhoun gathered the puck in the corner, skated into the slot, and scored. As the period went on the Vipers were spending a good amount of time in the box which included a short 5-on-3 for Leo, but the Vipers were able to hold on and get to the period break trailing 1-0 despite being outshot 18-5.

Starting the second period the Vipers were able to get the game even when Jayden Edsall fed a shot through traffic past Xander Mulholland. The Vipers kept the pressure on and got the lead later in the period. A shot from Cameron Whisler didn’t make it to the net and it dropped next to Franks who was able to push a backhand shot into the back of the net for his first varsity goal. That lead wouldn’t last too long though. Just about four minutes later Calhoun scored his second of the game. Colin Robison skated the puck into the offensive zone down the right wing, put a shot on goal, and Calhoun was there to clean up the rebound. The second period concluded with the game still knotted at two aside and with Leo holding the edge in shots on goal 26-16.

An intense third period made it 10:34 before the go-ahead goal was scored and most of that time had been spent in the Lions’ defensive end as the Vipers pushed for the tie-breaker. Push as they might they ultimately weren’t able to take back the lead. Davis caught a pass at the Vipers’ blue line, worked his way past the defender, and executed a slick forehand-backhand move to put the puck behind Ben Marques. Leo grew the lead to two a couple of minutes later. The play started in Leo’s defensive end. The Vipers brought the puck across the line with a mini 3-on-2 but JJ Scott broke the play up with a stick lift that sent the play the other way. After Alex Hendricks was taken down Aaron Amick got the puck along the near wall and skated toward the net, firing a wrist shot past Marques. Facing a two-goal deficit with 2:52 to play it was quickly becoming do-or-die time for Fort Wayne. They pulled Marques for the extra attacker with 2:28 to play but were unable to score 5-on-4. A slashing penalty to Calhoun with 29.9 seconds to play afforded the Vipers a 6-on-4 chance but they would have to work quickly to tie it up. They nearly scored immediately off the faceoff with a couple of different looks but it wasn’t meant to be. After surviving the initial onslaught Leo was able to run out the rest of the clock for their fifth win of the season.

After back-to-back weeks of near misses, Homestead was looking to simultaneously secure their first win while handing the unbeaten Carroll their first loss. As it is in any game but especially an upset bid, the first goal would be a key to any Homestead win but they weren’t able to get it. Carter Gnau scored first for the Chargers, corralling the rebound from a Corbin Klenke shot and scoring on the backhand. That was the lone goal of the period that saw Carroll put 20 shots on goal and surrender just five to Homestead. As has become the norm, Carroll turned up the offensive pressure with three goals in the period. The first of the period was another one from Gnau, this time it was a rebound goal off a nice redirect from Finn Cupp on a shot from Brody Burge. Burge himself scored the next goal for the Chargers. He nearly scored on a shorthanded breakaway but the chance was denied only for the Spartans to try a stretch pass that Burge easily intercepted. Burge took a couple of steps and ripped a slap shot past Connor Gould. Cupp would put his number in the goal column 3:10 later when he redirected a shot from Sam Krauhs to make it 4-0 Carroll at the break. Shots on goal in the second period were an astounding 19-2 in Carroll’s favor, bringing the game total to 39-7 through just 30 minutes.

Dylan Braun wanted to get in on the fun as well and scored a pair of goals in the third period to go along with his two assists, breaking his career-best point total from last season. His first of the period featured a nice dangle around a Homestead defenseman to get to the net, and the second one was a shorthanded goal where he was able to find space with a nice poke check past Cameron Hurley and sent the shot past Gould as he was falling to the ice. Luke Vanantwerp made 14 saves in the win for Carroll, his first in league play

The Chargers continue to roll as does Leo, except for when they play Carroll. Carroll is the only team in the city that Leo hasn’t beat and I think that continues, it’s more a matter of what the spread is going to be. Andrew Baumert’s availability looms large and assuming he can’t go I’m going to go with six goals, if he can play I’d say four goals.

If Homestead had a better showing against Carroll I was going to lean toward picking them this week but I just can’t do it now. I still think they have a decent chance to win this one and should come out flying after how the last game against the Vipers went at the end, combined with the last two weeks.