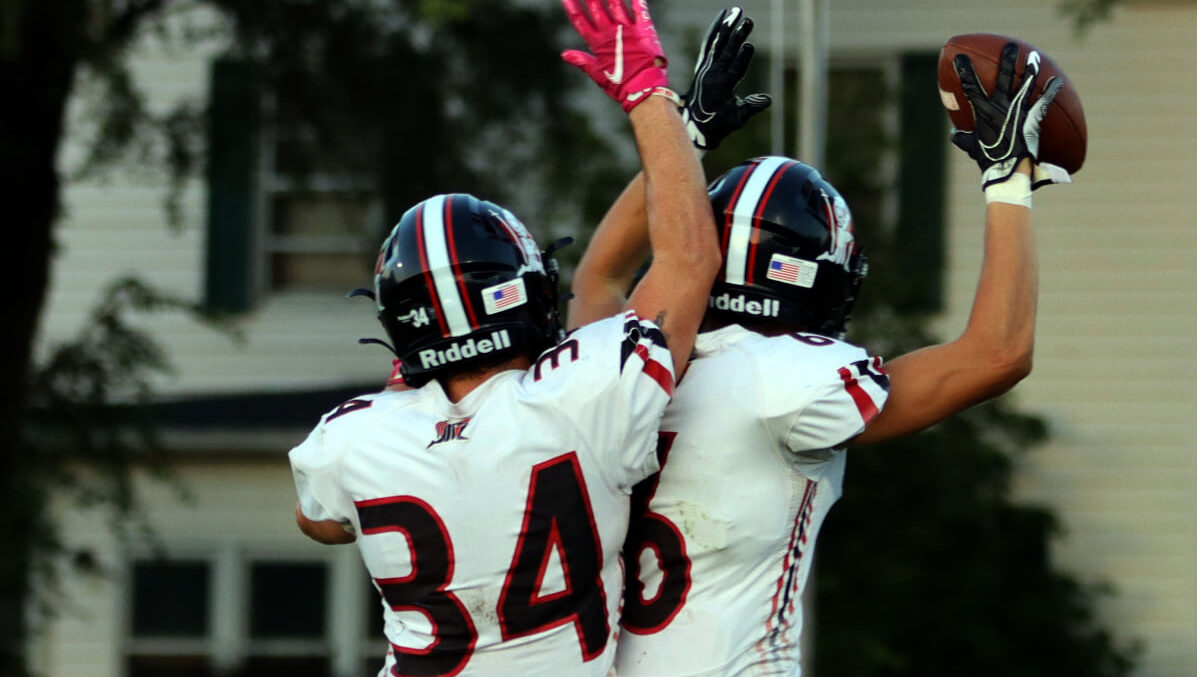 The Luers faithful will remember the date October 8, 2021 for years to come. While the game itself was very one-sided, quarterback Carson Clark just became the all-time passing yards leader in the SAC, with 5,984 yards in his career. It adds yet another layer to what has already been a memorable year for the Knights. They hope that the accolades continue with a chance to finally finish atop the SAC standings coming next week against Snider.

There’s winning and then there’s going up 63-0 at halftime on your way to a 69-7 victory, winning. Carroll flexed their muscles at Zollner Stadium in a complete demolition of the Cadets. While Jeff Becker and the Carroll offense were great on Friday, a lot of their points can be attributed to other areas of their team. A bad punt by Concordia and a blocked punt shortly after, each led to a Charger touchdown. A scoop-and-score by Dylan Bennett and a punt return for a touchdown by Braden Steely also helped matters. Let this game be yet another example of how Carroll can not only beat you with their offense, but their defense and special teams too.

Tyrese Brown did what he does, rushing for well over 100 yards once again to go along with his 2 touchdowns. However, the story of this game has to be about how well Luke Haupert played under center. Snider had been waiting for him to have his breakout game, and what a time to have one: 16 of 22 on passes, 224 yards passing, and 2 touchdowns against Bishop Dwenger. His top target was Kamari Juarez, who showed his incredible athleticism with two great touchdowns receptions and 167 yards receiving. It was a terrific showing for the Snider offense, as they stare down a date with Luers next week.

Week 9: vs South Side

Homestead was in a dangerous spot that no team ever wants to be in. Coming off a tough loss last week, the Spartans were sleepwalking through the first half against Wayne, finding themselves only up 14-8 at halftime. Homestead did manage to pull away in the second half behind a great effort by Kam Johnson, who rushed for 78 yards and 3 touchdowns, as well as Desmond Smith Jr, who ran for 102 yards. After their sluggish start to this game, look for Sparty to come out ready to play against South Side next week.

Two years ago, Dwenger came into Spuller Stadium and won a classic game between these two schools in the blowing rain. Last night, in similar conditions, the Saints had no such luck. Despite keeping things close at halftime, squeezing 197 yards out of Bohde Dickerson through the air, and seeing Rocco Ciocca make some of the best catches of his career, the Saints still lost by double-digits. While the Saints currently sit at an even 4-4 record, they’ve looked much more competent on offense. They’ll look to finish with a winning record in SAC play next week.

Yes, North Side was dealing with COVID issues leading up to this game, but they still had playmakers all over the field. It’s just that these Bruins are executing at a high level right now. Mykell Nabors, Julante Hinton, and many others ran all over the North Side defense in a 31-14 victory and continue to look better every week. Don’t look now, but Northrop plays a Dwenger team that is coming off back-to-back losses. If the Saints aren’t on their game, Northrop has a legitimate chance to pull off an upset.

Give the Legends some credit. They showed fight, not letting the circumstances get in their way. Donovan Williams played well at QB, passing for 102 yards and a touchdown, completing 10 of his 19 passes. Dominick Malone also did a tremendous job filling in as the Legends leading rusher, with 146 yards on just 14 carries. There’s a lot to like about the future of North Side football, as their focus shifts to Concordia and finishing the season with a win.

The Generals continued to show that they’re better than what their record says they are, after hanging with Homestead until the fourth quarter. Lamarion Nelson was given the rock 32 times in this game, and he rewarded his team with 185 yards and a touchdown. Wayne will finish their season at Carroll, but looking further ahead, Wayne is going to make life difficult for any team it faces in the postseason.

Week 9: vs North Side

Concordia had way too many miscues on special teams to even give themselves a chance against Carroll. Let’s just be honest, trailing 63-0 midway through a game is absolutely ridiculous. It doesn’t matter how good the other team is, that should never happen in a football game. The silver lining for the Cadets is that they have one game left before the postseason. Concordia desperately needs a good showing next week, meaning they’ll need guys like Eli Mattox and Dontrell Johnson to be at their best in order to avoid slipping any further in our rankings.

There’s not much to say here for the Archers. Coming off a heartbreaking loss to North Side, there wasn’t much they could do to stop Luers in a 50-0 loss. Jaylen Lattimore and Trevor Hapner will try to make things difficult for the Spartan offense as South Side heads to Homestead next week.

Knights in First Place after Win over Dwenger
Player of the Week – 2021 Week Eight: Mason Sheron