Week 7 SAC Wrap-Up: Another Night Filled With Offense in the SAC 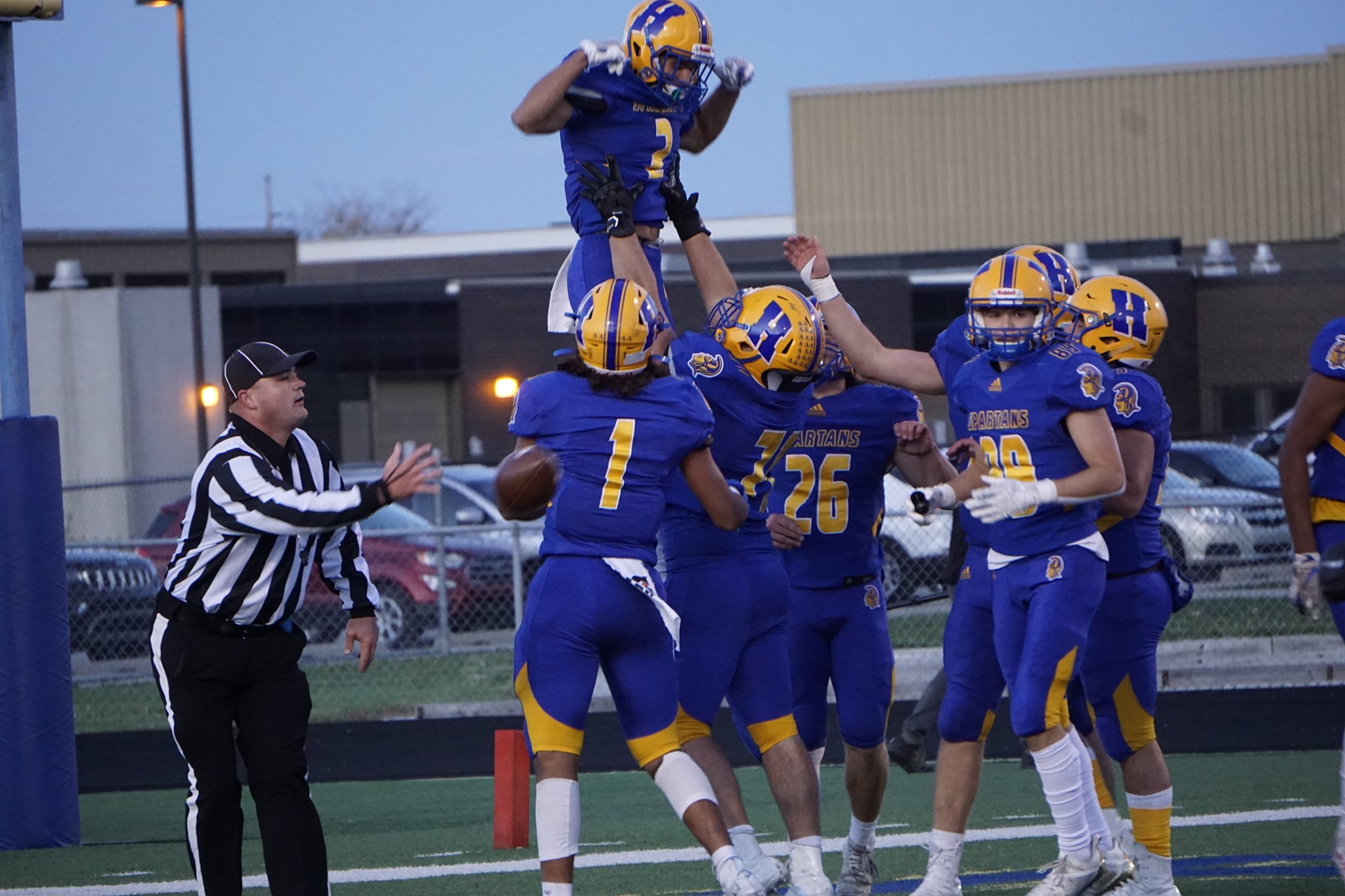 Another giant step was taken in the SAC race. Homestead’s 29 point victory over the Chargers keeps the Spartans in the driver’s seat with games against Wayne and South Side remaining. For the seniors, chasing their second straight SAC title, this one was sweet. Sparty extended their winning streak to 7 over Carroll and did so in impressive fashion. Homestead reached 70 points for the first time since 1996, when they did so again against Carroll.

With this being a momentous win for the Spartans, it came with some momentous performances. Homestead finished with 765 yards of total offense and never punted in this game. Evan Ormsby threw for 436 yards and 6 TD, with 2 more on the ground, and completed 73% of his passes. Of his 22 passes, 8 found their way into the hands of Jared Kistler for 177 yards and 2 TD, while 5 went to Nate Anderson for an unbelievable 230 yards (a school record) and 4 TD! That’s 46 yards per catch! Anderson came up huge in this game and knows how much this win means to the team and the season.

“It’s big,” Anderson said, “especially for the seniors. They had one more chance to play Carroll at home, maybe another one coming up, but a really good game with both teams fighting it out to the end.”

While this was only a 35-28 game at halftime, it felt like Homestead was in control while Carroll was just along for the ride. While the Chargers struck first on the scoreboard, interceptions forced them to match Homestead touchdown-for-touchdown. Eventually, a third interception put this game on ice and caused Homestead to pull away without any problem in fourth. Homestead is more than pleased with the way their offense played, and has to be satisfied with the defense was able to force turnovers and keep Carroll’s offense in check in the second half. But the thing they have to be the most excited about is the way RB Braeden Hardwick played.

In this game last year, Hardwick suffered a season-ending injury during a tremendous 2019 campaign, a huge blow to an unbeaten Spartan team. After months of rehab in the spring during quarantine, Hardwick returned as the starter for the Spartans in 2020. While Homestead hoped he’d pick up right where he left off last year, that wasn’t the case. Hardwick only had two 100+ yard games this year, after 2019 when that was almost a weekly occurrence, and even finished with -3 yards last week in Homestead’s win over North Side. Once the Spartans passing game got going, it was hard not to think about how much more potent this offense could be with a consistent run game. If Hardwick got going, this team would be better than last year’s.

On senior night, the senior running back showed up to have his best performance of his career. 287 yards and 2 TD, nearly 17 yards per carry. Hardwick added another dimension to this offense and made it possible for Ormsby to attack this defense like never before. If this becomes the norm at Homestead as we near sectionals, this team is really, really scary. For now though, Homestead’s focus is on finishing the season strong and winning the conference.

“Every game we need to do our jobs, not look past anybody,” Anderson said. “Anything can happen in this league, a bunch of good teams left. Wayne and South Side, you can’t look past those games, you just got to do your job and get the dub.”

Going into this week I don’t think anyone thought that Snider would end up having the most dominant win of the weekend. QB Luke Haupert played a very efficient game, going 11 for 14 with 102 yards and 1 touchdown. RB Tyrese Brown complimented him well with 107 yards and 2 TD of his own, with an average of 10.7 yards per touch. While the offense finally broke through, the defense was the real story here. RB Damarius Cowen was held to just 71 yards, about 3.6 per carry. Because of their inability to run, Northrop really had no answer on offense. Snider was able to secure the shutout and force 3 turnovers. Is this a sign of things to come? We should know by next week when the Panthers travel to Bishop Dwenger High School.

For what was a 14-6 game at halftime, this one ended quite mercifully in the second half. Dwenger was able to ring off 29 unanswered points after halftime to give themselves the win. Brenden Lytle did what Brenden Lytle does with a 13/17 game in which he threw for 123 yards and 3 TD. The Saints rushing attack also worked for 218 yards and 3 TD. While it may not amount to a conference title, you have to admit that this has been yet another great season for the Saints, who will look to add to their win total against the Panthers next week.

South Side at North Side

In another edition of the Totem Pole Game, North Side made sure to take control early and never looked back. Duce Taylor turned in another impressive performance for 286 yards and 6 touchdowns. He spread the ball evenly to his receivers but it was Jordan Turner with a team-leading 7 receptions for 125 yards and 2 touchdowns to give the Legends a boost on offense. With another game in which RB Jasuan Lambert went over 100 yards, North Side has to be excited about what they could accomplish in the playoffs. This is an offense capable of scoring a lot of points and can hurt you in a lot of different ways.

In one of the tighter games of the night, Concordia was able to survive. RB Amir Drew struggled mightily, only gaining 24 yards, forcing Brandon Davis to make plays at quarterback. His 144 yards and 2 touchdowns were just enough to give the Cadets some offense and get out with the win. Though had to overcome an 188 yard, 2 touchdown performance by Wayne halfback Chris Thomas, the defense was able to do its job and made some timely plays late. While it wasn’t pretty, Concordia will have take it with demanding games against Carroll and North Side remaining.