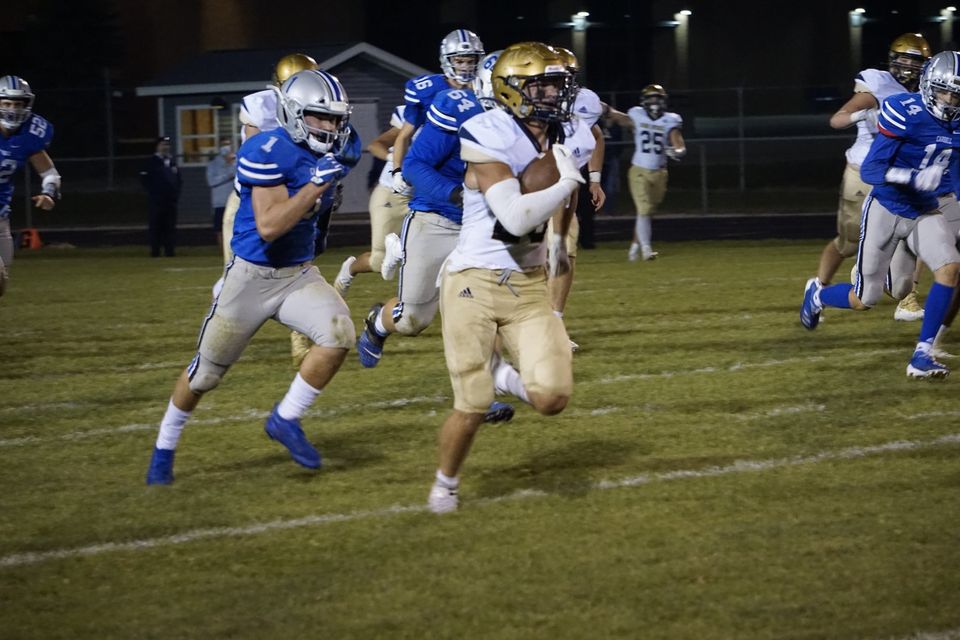 Just like that, there are no unbeaten teams left in the SAC.

All eyes were on Dwenger-Carroll on Saturday to cap off an already thrilling weekend of high school football. Many expected a close game, one that would be decided in the fourth, and it was. While much was made of Carroll’s offense going into this game, averaging 54.5 points through their first four games, it was the Dwenger offense that was nearly unstoppable in the second half.

“It’s respect for us,” QB Brenden Lytle said. “I feel like Carroll just thought that they were going to walk over us because we lost to Homestead, but we fought, we did our thing, we played Bishop Dwenger football.”

One of the differences in this game was that Dwenger was able to run the ball more effectively than they had in weeks past. They had 191 yards collectively, outrushing the Chargers who could only muster 29 on the ground. This disparity put a lot more pressure on Carroll QB Jeff Becker to make plays than it did Lytle.

While Becker still threw for 350 yards and 2 TD, he made more mistakes than he had all season. All 3 of his interceptions this year came last night, with a fourth negated by a roughing the passer penalty. He was consistently flushed from the pocket and forced to make throws on the run because of the Dwenger pass rush.

“If it weren’t for my defense our offense would not look the way it looks,” Lytle said. “To hold Carroll, after they’d been putting up 50+ points, to 21 points, that’s hands down an amazing job. I give it all to my defense.”

Dwenger held the explosive Carroll offense scoreless in the first half. Eventually though, Carroll began to find their rhythm and score touchdowns. However, after Dwenger took a 10-0 lead at halftime, the Chargers never possessed the ball with a chance to tie or take the lead. Dwenger answered all 3 Carroll touchdowns with one of their own.

Brenden Lytle and the Saints offense drove the length of the field at will. Lytle nearly matched Becker’s yardage, throwing for 311 yards and passing for a touchdown. To finish off the Chargers, it was KJ Tippmann, breaking through tackles and winning a footrace to the end zone on an incredible touchdown run. This was the nail in the coffin for the Chargers, as they threw an interception on the following drive. Dwenger held on to win by 10 and knock the Chargers out of the top spot in the standings.

“All those guys,” Lytle said, “they’re playmakers. With KJ, I’m not shocked when that stuff happens because I play with them every day. They just did their thing and that was amazing.”

Dwenger found redemption for their heartbreaking loss last week. They move to second in the standings, with Carroll back in third. But the real winner from this weekend might have been a team that didn’t play at all on Saturday: Homestead. With their win over Dwenger, they hold a tiebreaker in the standings that currently has them in first place. Still, there’s plenty of football left to be played, including a huge Carroll-Homestead matchup in a couple of weeks, but for right now the SAC has three teams at 4-1, all fighting for the Victory Bell.

In our game predictions this week, we told you that if the end of the Dwenger game was any indication that Homestead QB Evan Ormsby had turned the corner as a passer, he should play his best game this week. He did. Ormsby threw for 300 yards and 5 TD, while completing 70% of his passes, his best performance of the season. Long touchdown strikes to Jared Kistler and Nate Anderson early were key in taking Snider out of the game early and keeping momentum in the Spartans favor. Both receivers went over 100 yards in the game and each had 2 touchdown receptions. The defense did its job once again, nearly coming up with a shutout, while forcing a sputtering Snider offense to go 3 for 13 on third down. After the game, coach Chad Zolman, back on the sidelines this week, talked about how pleased he’s been with his defense.

“When we started the season, we felt like this would be the strength of this team. They’re starting to play like that. We’re not big up front, but those kids get off blocks, they run well. My linebacker corps has been playing really well. In the secondary I thought we kept everything in front of us, we forced throws underneath, which was the plan. [This defense] is coachable, they did everything we asked them to during the week. It was a good overall team win.”

This game had many Concordia fans nervous throughout. The offense couldn’t get anything going in the first half. However the Cadets defense kept their team in the game by holding Northrop running back Damarius Cowen to only 76 yards, only about 3.3 yards per carry,  and 0 touchdowns, his lowest totals of the year. That speaks volumes about this defense, which has been forcing turnovers and held opposing teams to 6 points in games where the whole team was healthy, all coming last night. In the meantime, 13 points in an 11 second time frame during the third quarter was what ultimately gave Concordia the win, with a Tyler Grossman circus catch good for a go ahead touchdown.

North Side at Bishop Luers

In another spectacular performance by QB Duce Taylor (329 yards and 6 TD) the Legends came up just short. Each team traded touchdowns throughout, with Luers’ Carson Clark connecting with Brody Glenn to give the Knights a 42-39 lead with about 2 minutes left in the game. Then, Taylor responded with a 62 yard pass to freshman Brauntae Johnson to give North Side a 46-42 lead. With only about a minute and a half remaining Carson Clark led Luers down the field again, which included a long fourth down conversion to set the Knights up inside the ten. With 12 seconds remaining, Clark found Glenn again in the end zone to give Luers a 49-46 lead and the win. Carson Clark played his best game thus far, competing 25 of his 41 passes for 339 yards and 4 TD. Brody Glenn also had his most productive game, coming up with 12 receptions, 144 yards, and 2 TD. This marks the third straight year in which this game had been decided by 5 points or less and was won in the fourth quarter, making this one of the most competitive series in the SAC.

Wayne at South Side

Wayne appeared to have this game under wraps after Lamarion Nelson scored a touchdown and converted the two point conversion to give the Generals a 28-17 lead in the fourth. RB Chris Thomas was having another fantastic game, rushing for 162 yards and 2 TD, averaging 6.5 yards a carry, and it felt as though the Generals could lean on him to finish the game off by running out the clock. Unfortunately for Wayne, things didn’t work out that way. A Roosevelt Norfleet III touchdown pass to Ashton Johnson and a Javonte Malone touchdown run with 2:44 remaining gave South Side a 29-28 lead that they were able to hold onto the rest of the way. Norfleet passed for 109 yards and 1 touchdown, while RB Matt Morris 92 yards and a touchdown to help give the Archers their first win of the year and their second straight against the Generals.