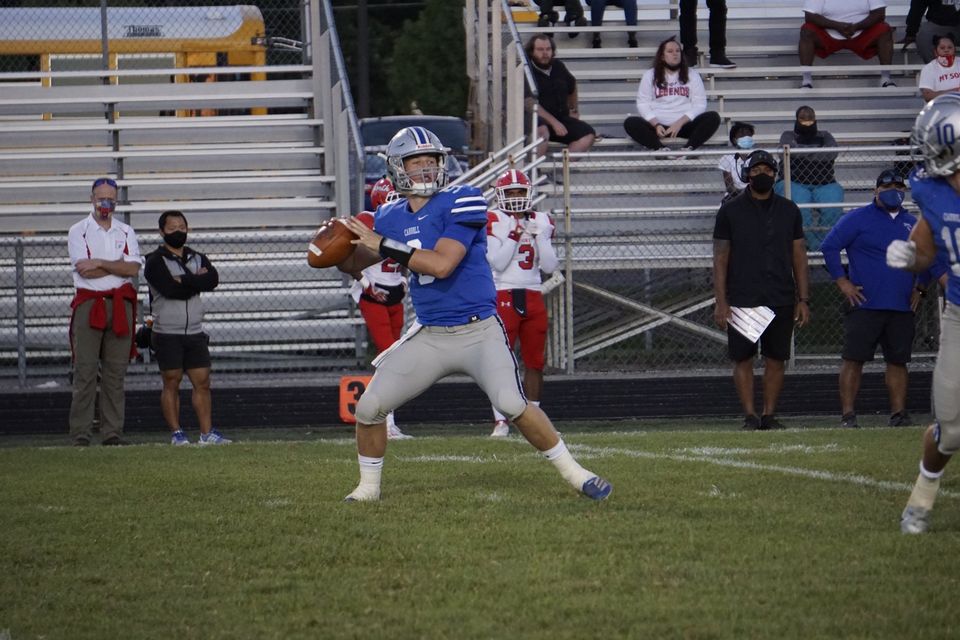 This is the toughest game that Carroll will play in the regular season. Few teams are as well-conditioned and talented to compete with the Chargers and only Dwenger has the ability to control the clock and limit Carroll’s possessions on offense. The problem last week was that the Saints made crucial mistakes that allowed Homestead to stay in the game. They committed 2 turnovers, botched a golden opportunity to score before halftime, and were called for an uncharacteristic false start penalty when they had a chance to put the game away late on 3rd and short. Carroll can’t rely on the Saints to make those same mistakes again. Senior Brenden Lytle has gotten off to another solid start at quarterback, throwing for 601 yards, 7 touchdowns, and only 1 interception. His top wide receiver Rocco Ciocca has been quiet over the last couple of weeks after starting the season with 12 catches and 2 touchdowns in his first two games, possibly due to the return of Henry O’Keefe at receiver in week 3, but his size should make him a huge part of the game plan this week against the Carroll secondary, especially with Dwenger’s struggles running the ball. For the Chargers’ offense, the formula is simple: throw the ball. No one had been able to stop their receivers in the passing game so far this year and if it ain’t broke don’t fix it. The Becker-Englert connection is now good for 24 completions, 623 yards, and 9 TD. Dwenger’s physicality up front could be a problem for the Carroll offensive line, but they’ve played well over the last couple of weeks to allow Becker time to make a play. We’ll pick Carroll in a closer, lower-scoring game than they’re used to.

Last week QB Evan Ormsby found his touch and completed 2 touchdowns late in the game to get the Spartans to overtime to win the game. If those late-game heroics were a sign of things to come, we should see him play his best game of the year this week against Snider. The Panthers defense has been susceptible to teams that can throw the football, giving up a total of 714 yards through the air against North Side and Carroll. Meanwhile the Panthers own offense has yet to find rhythm. They’re 14-7 win over South Side last week, the offense struggled to find any consistency and was very fortunate to find a way to win in the end. They won’t find such luck against one of the best defenses in the SAC. Homestead shuts down the Panther offense and wins 28-0.

Coming off a convincing win over Luers, the Cadets are trying to get back in the conversation for being one of the best 3A teams in the state. They make a strong case, in the two games that Brandon Davis has played in he’s led Concordia to 37-0 and 38-0 blowouts, while passing for 237 yards, 3 touchdowns, and has yet to throw an interception. Granted those two games were against South Side and Luers, meaning this team still has a lot to prove in the coming weeks. This time against Northrop, their defense is ready to try to slow down the SAC’s leading rusher Damarius Cowen, who’s averaging 183.3 yards per game. Their ability to force interceptions has been exceptional, as they lead the SAC with 10 total. If they can do their job on defense, the offense should be able to do theirs and give the Cadets a winning record halfway through the season.

Both of these teams have played brutal schedules to start the year and have navigated them the best they can. The Knights have some very winnable games to set themselves up well for the postseason, but this week, it’s hard to see them beating a team that leads the SAC by far with 1,868 total yards on offense this year. Keep in mind, the Legends gobbled up that yardage against the defenses of Snider, Dwenger, and Carroll. Meanwhile, Luers has been unable to limit the damage on defense enough to give their offense a chance. All of this means that Duce Taylor, now with 1,262 passing yards and 15 TD, and the North Side offense have the opportunity to put up some monster numbers this week.

Don’t let the records deter you, this will be an entertaining game to watch. Last season these two came into this game winless, with South Side getting into the win column after a hardfought 46-35 win. This time around, the defenses should be a little better, but Wayne ultimately has more playmakers on offense. This will be a run-heavy football game, featuring Chris Thomas and Shawn Collins for Wayne as well as Matt Morris for South Side combining for 162 carries on the year. We’ll give the edge to the Generals to return the favor by getting it done on both sides of the ball.