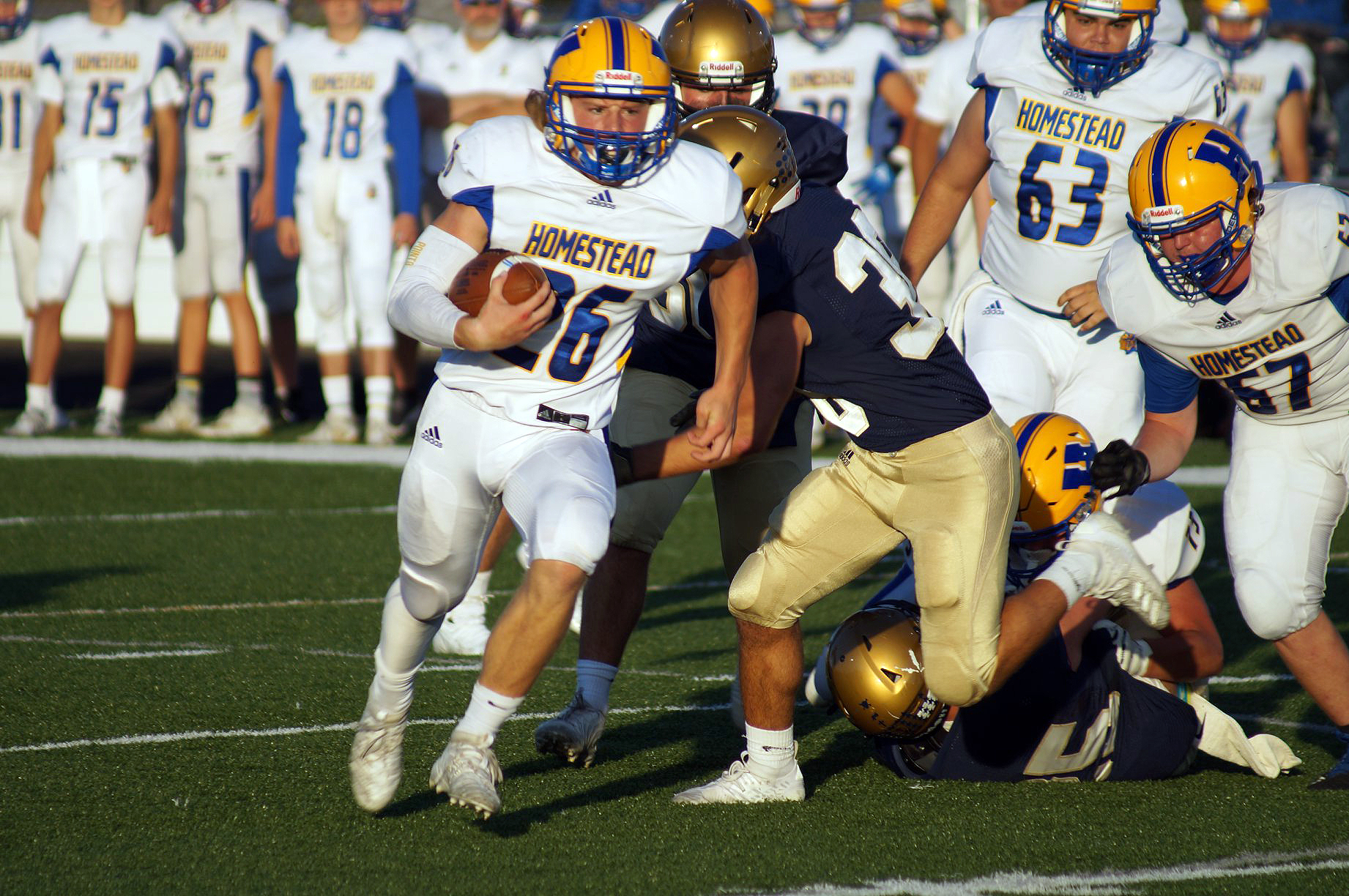 It’s hard to find more evenly matched teams than the Spartans and Saints. Both teams entered Friday putting up very similar numbers that were a good indicator of how close this game would be. These are games that coaches often say are won by the team that wants it more. Both teams seemed to want it equally though.

Both offenses came out looking for the big play. Both Homestead and Bishop Dwenger completed long passes, including a 51-yard bomb from Dwegner QB Brenden Lytle to Griffin Eifert that gave Dwenger an 8-7 lead early after a 2-pt conversion.

The defenses were even stronger it seemed. Homestead had two key turnovers. One was a fumble on a promising drive for Dwenger in the first quarter. The other was an interception made by Jake Archbold in the end zone right before the half, when Dwenger had a golden opportunity to take the lead and possibly momentum going into the locker room. Whenever Dwenger was given an opportunity on offense, Homestead made sure they got off of the field without allowing any points.

Things were still within the Saints’ grasp late in the game, when they blocked a Homestead field goal. However, they couldn’t do anything on offense and Homestead got the ball back. The Spartans got into field goal range and this time Gunnar Fry was able to make the 24 yd attempt to put Homestead up 17-8 with only 2:51 remaining. That put the game out of reach and gave Sparty a big win. Homestead head coach Chad Zolman commented on his team’s play after the game.

“I thought we did a really good job against the run game. I thought defensively we made it difficult for them to move the ball on the ground and I think that takes away some of the things that they want to do. There’s a lot of plays during the game that add up to a win. There’s 6 or 7 plays probably that we’ll have to look back on and say that that was a key play for us.”

Obviously, this game should not change anyone’s perception of Dwenger. They are still one of the best teams in the conference. In a game that someone had to lose, it was the Saints coming out with their first loss of the year. They won’t have to wait long to get another chance at beating a quality opponent, with Carroll on the way next week. Brenden Lytle will look to build off of a good performance against the Spartans, after he threw for 208 yds, 2 TDs, and went 17-for-28 on his passing attempts. WR Griffin Eifert had 84 yds and was the recipient of one of Lytle’s touchdown passes.

Meanwhile, Spartans QB Luke Goode had 173 yds and completed 13 of his 23 passes. Goode commented on the win and how the team will prepare for their next matchup against fellow unbeaten Snider.

“It means a lot but we just got to play and forget because next week we play a great opponent in Snider and there going to come into our house, so we’re going to enjoy this win but move on to the next game. “

Carroll continues to roll in what has been a terrific beginning to their season. QB Jeff Becker had 5 total TDs, but only threw for 98 yds and his 12-for-23 statline is a little disappointing, but he’ll likely be able to bounce back next week. He was able to get 96 yds on the ground though. Northrop RB Jeremiah Green was not given a great opportunity to make his presence felt this game. He only had 4 carries for 19 yds, making the Bruins offense a bit one-dimensional. Carroll heads to Dwenger next week, while Northrop will prepare to host Concordia.

RB Amir Drew had 107 yds and 3 TDs for the Cadets on Friday. He was a big factor, along with QB Brandon Davis who threw for 242 yds and 2 TDs and completed 12 of his 16 passes. Concordia gets back to .500 with a record of 2-2. Meanwhile, Luers continues to miss all the talent they lost to graduation last year, as they drop another game and are now 1-3. Concordia will play at Northrop next week and Bishop Luers will play at North Side.

South Side at Snider

We expected nothing less from Snider this week as they took on the Archers. They are out-rushing opponents by an unreal 1,082-324 yds and have yet to give up a rushing touchdown this year. There’s not much more to say as they’ve also been outscoring opponents 152-34 and now have 2 shutouts this year. Snider will play at Homestead next week and South Side will play at Wayne.

North Side at Wayne

In a game between winless teams, North Side had a surprisingly dominant game against the Generals. North Side rolled out a new QB, Duce Taylor, and he was magnificent, with 228 yds off of a 10-for-19 day and 5 total TDs. The Legends will face Luers next at home and the now 0-4 Wayne Generals will play in another game against a winless team, South Side, at home.