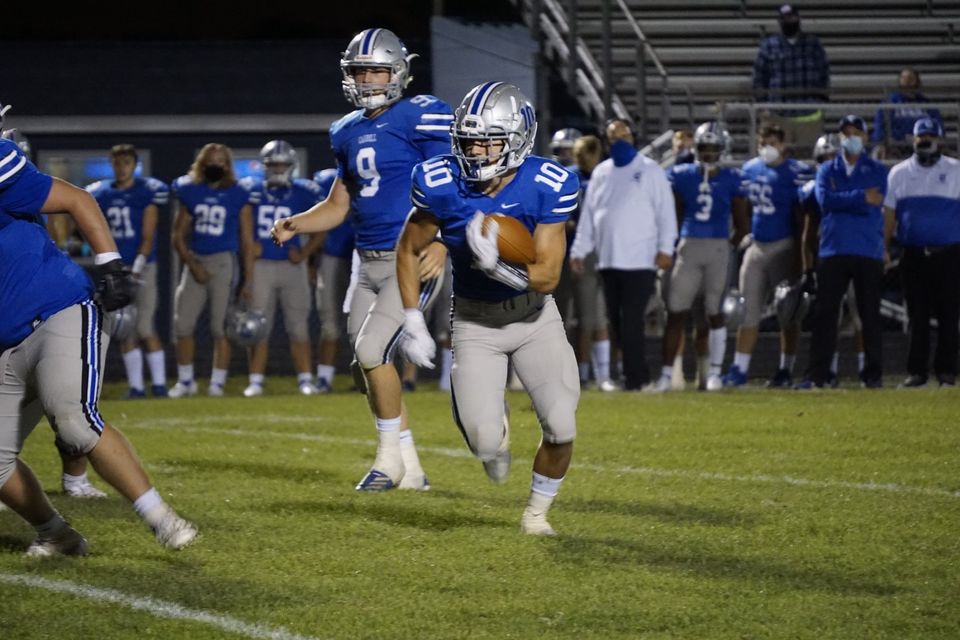 Carroll’s offense is on another level. Junior QB Jeff Becker has now passed for over 1,000 yards and 14 TD, the most of any quarterback in Indiana, and has already matched half of his production from all of last year. He and his receiver Mason Englert have been a special combination this year, with Englert now at 18 receptions for 537 yards and 8 TD, averaging about 30 yards per catch! It’s hard to see anyone stopping the Chargers right now, as their grip on the SAC tightens a third of the way through the season.

The SAC’s most consistent team continues to roll. The Saints have liked what they’ve seen thus far, getting little resistance from any of the teams they’ve faced in the opening weeks. QB Brenden Lytle has looked good, passing for 407 yards and 5 TD on an efficient 22 for 33, while the running game is starting to get going, with 398 yards and 8 TD. However, we’ve reached the “show me” point in the season, with the Saints having upcoming games against Homestead, Carroll, and Concordia. With this being the defining stretch of Dwenger’s season, they’ll need their best players to step up and make key plays in important moments. All these games should be close.

It’s still hard to get a feel for this Homestead team. On one hand, this team has made crucial mistakes and has had trouble scoring points, ranking 6th in the SAC in that category. But on the other, their defense has been great, shutting down Concordia and Luers for 13 total points, and when offense does get going, it can be tough to stop. We know there’s talent all over the field for Sparty, and the win against Luers was a step in the right direction, but now they, like Dwenger, have a tough stretch of games upcoming. We’ll learn a lot about this team over the next several weeks and see if this team can get some big wins, it will most likely be on the ground with running back Braeden Hardwick (449 yards, 6.0 yds/car, 5 TD).

The Legends knew that they had a brutal schedule to open the year, and while they would have liked to snatch another win, they should be pleased with the improvement that this team has shown this year under Coach Brevard. QB Duce Taylor has been admirable, passing for 1,087 yards and 12 TD in incredible efforts to keep North Side in games, while RB Jasuan Lambert finally broke through for 152 yards and 2 TD on Friday. As long as the Legends keep their focus, they shouldn’t have a problem finishing the season with a winning record.

Week 4: at South Side

The Panthers were able to notch a win over Concordia on Friday. The tandem of Langston Leavell and Tyrese Brown out of the backfield was good for 146 yards and 2 touchdowns in a solid win for Snider. Now at 1-2, Snider moves back into our top 5, but now the question is, can they play like this the rest of the year? We’ll have to see how it shakes out, as Coach Tippmann’s team prepares for South Side.

Northrop had looked really dangerous up until their loss to Wayne on Friday. RB Damarius Cowen has been ripping apart defenses, but it seemed as though the Generals found an answer for him, holding Cowen to just 99 yards. On the other side of the ball, Northrop was unable to stop Wayne’s rushing attack, allowing 436 yards on the ground. This loss was disappointing as the Bruins had a shot to start 3-0, but now they’ll have to brace for a matchup with Carroll with a 2-1 record.

The Cadets were shut out once again on Friday, this time by Snider. RB Amir Drew couldn’t muster up enough offense, being held to 71 yards. If the Cadets want to rebound from a difficult start to their year, it will have to start with Drew.

The Knights couldn’t keep up with the Spartans and were blown out in their week 3 game. Even though Luers would like to be a little more competitive in these games, they have to like what they’ve seen from QB Carson Clark so far. The junior has passed for 627 yards and 3 TD this year.

Week 4: at North Side

Wayne got their first win under Coach Haydock and it was a bit of a surprise to the rest of the SAC. The Generals took down Northrop with the help of their running backs, one of which, RB Shawn Collins, who’s quietly been having a terrific season, rushing for 332 yards, 3 TD, while averaging an unbelievable 10.4 yards per carry.

The Archers are now the only winless team in the conference, having lost their first three games by a 77-point margin. RB Matt Morris was able to give the Archers a spark, rushing for 133 yards against Dwenger with the majority of his yards coming on a thrilling 97-yard touchdown run.