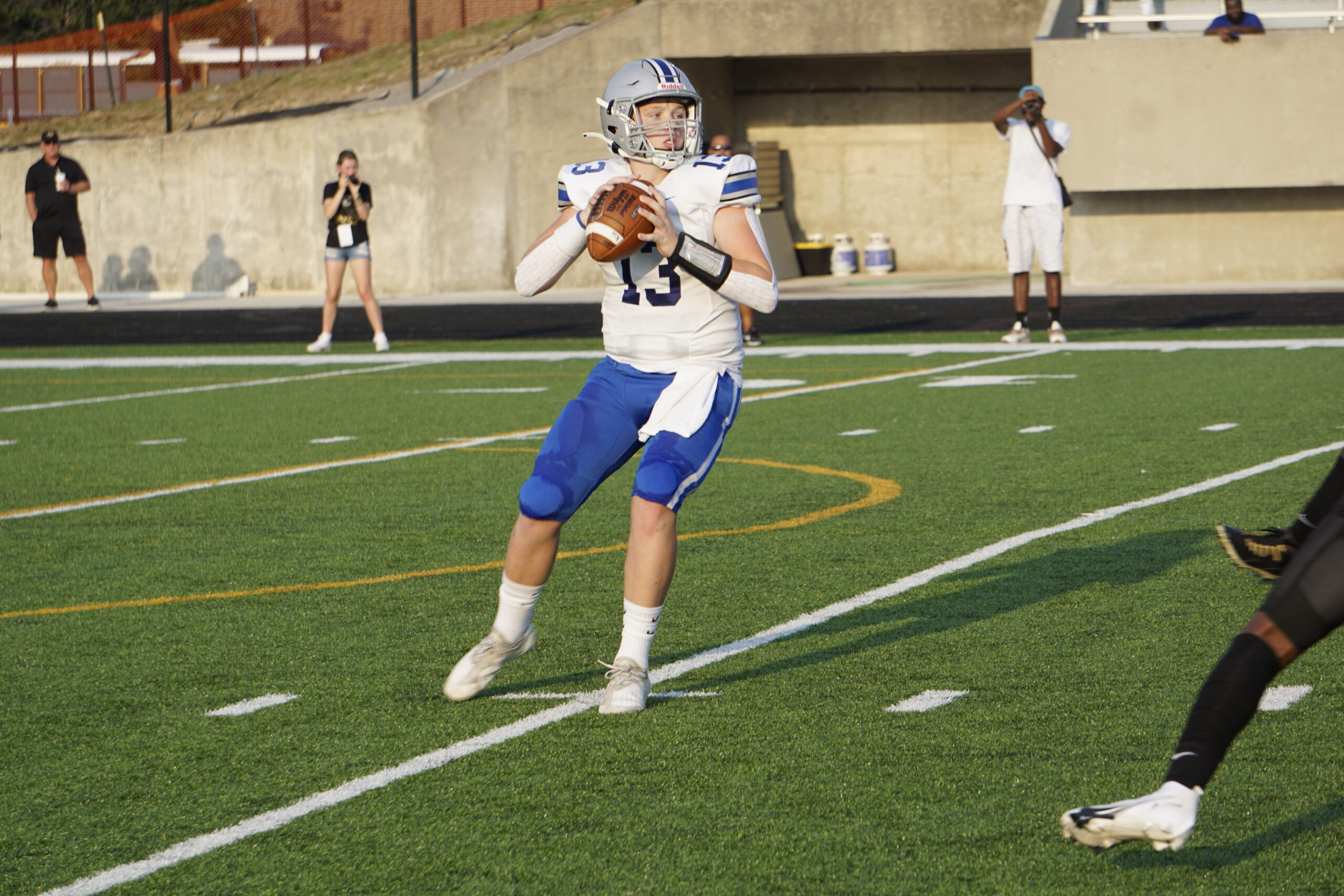 Week 3: at South Side

Dwenger took down North Side with ease on Friday, winning 39-13. Aziz Dixon and Teddy Steele shared much of the load and had multiple touchdowns in the game, while Collin Vance had 2 interceptions. Their win coupled with Snider’s loss moves them up to the top spot in our rankings. This team should keep chugging along with multiple guys filling up the stat sheet every game. There are bigger tests on the horizon, but no team looks better right now.

The Spartans are another team looking fresh out of the gate. QB Peyton Slaven has thrown for 318 yards and 5 touchdowns in his first two games, while his top wideout Nate Anderson has made the most of his 8 receptions, gathering 162 yards and 3 touchdowns in the process. This Homestead squad looks sharp, but their first test will come this week against Luers. Based on what we’ve seen from the Knights, Homestead will need to make the most of their possessions next week.

After another spectacular performance, Carson Clark has now thrown for 596 yards and 7 touchdowns in this young season. On the ground, Sir Hale broke 100 yards again and punched it in for 3 touchdowns. It’s clear that the Knights are a legitimate contender this season and they have an opportunity to tack on another huge win against Homestead this week. Expect lots of offense in that one.

Week 3: at North Side

In his first varsity football game, QB Owen Scheele led Carroll on a game winning touchdown drive to defeat the Snider Panthers. On the drive, Scheele and the Chargers were able to convert in high-pressure situations, driving down the field and finishing it off with a 12 yard touchdown pass to Jameson Coverstone. Scheele performed well in his debut, passing for 284 yards and 3 touchdowns while finding the sure-handed Coverstone 10 times for 229 yards and all 3 touchdown passes. It was an incredible effort by the entire team, especially coming off of a very rough first game in which they committed 5 turnovers. Carroll is now 1-1, with another intriguing matchup in week 3 at North Side. If they can continue to play at this level, the sky’s the limit for these Chargers.

After a chaotic win over North Side in week 1, Snider couldn’t repeat the magic in week 2. RB Tyrese Brown had 131 yards on 23 carries and 2 touchdowns, including a go-ahead score late. RB Langston Leavell was also effective, averaging 6.6 yards per carry. But in a hard-fought game that was evenly matched, Snider happened to come out on the wrong end of the scoreboard. Though they’ve dropped all the way down to #5 in our rankings, they should have no problem getting back to their winning ways with Concordia next on the schedule. Don’t lose sight of these Panthers.

After week 1, it looked like North Side might be able to give Dwenger some trouble. As it turned out, this game got out of hand. The Legends only managed one offensive touchdown late in the fourth quarter and couldn’t stop the Dwenger offense. Though it was a tough game, they won’t have much time to dwell on it with Carroll coming to Chambers Field next week. They’ll need Brashawn Bassett and Jontae Lambert to play like they did in week 1 if they want to pull the upset.

Sure, this team is winless but they’ve managed to get the offense going against two very good teams. RB Lamarion Nelson has been sensational with 277 yards and 3 touchdowns to start the year, while gaining a healthy 5.8 yards per carry. As long as he stays hot, Wayne will be able to turn their record around.

In spite of a great effort by QB Eli Mattox, Concordia fell well short of beating Homestead. Mattox passed for 205 yards and 2 touchdowns, including an 80 yard score to Jace Parnin, but they couldn’t keep up with what the Spartans were doing offensively. After allowing 244 rushing yards to the Spartans, the Cadets defense will be tested again next week against Snider’s rushing attack. They’ll need to be sound in that area or else this team could find themselves down big again.

South Side was able to get the win thanks to a fourth quarter in which the offense scored 20 unanswered points to make the final score 26-14. It was the first time South Side had won their home opener since 2008; not a bad way to get the Guy Lee era started. Though QB Quincy English had a tough game, Jaylen Lattimore was able to lift his team on the ground with 3 rushing touchdowns. He’s been a major playmaker thus far and could have some more big games ahead.

Though it ended in disappointment, Roosevelt Norfleet III looked very good in his return to South Side. The senior put up 149 yards and a touchdown against his former team, however it wasn’t enough to overcome the Archers’ fourth quarter barrage. Northrop has an opportunity to get a win next week at home, before their schedule takes a really difficult turn.