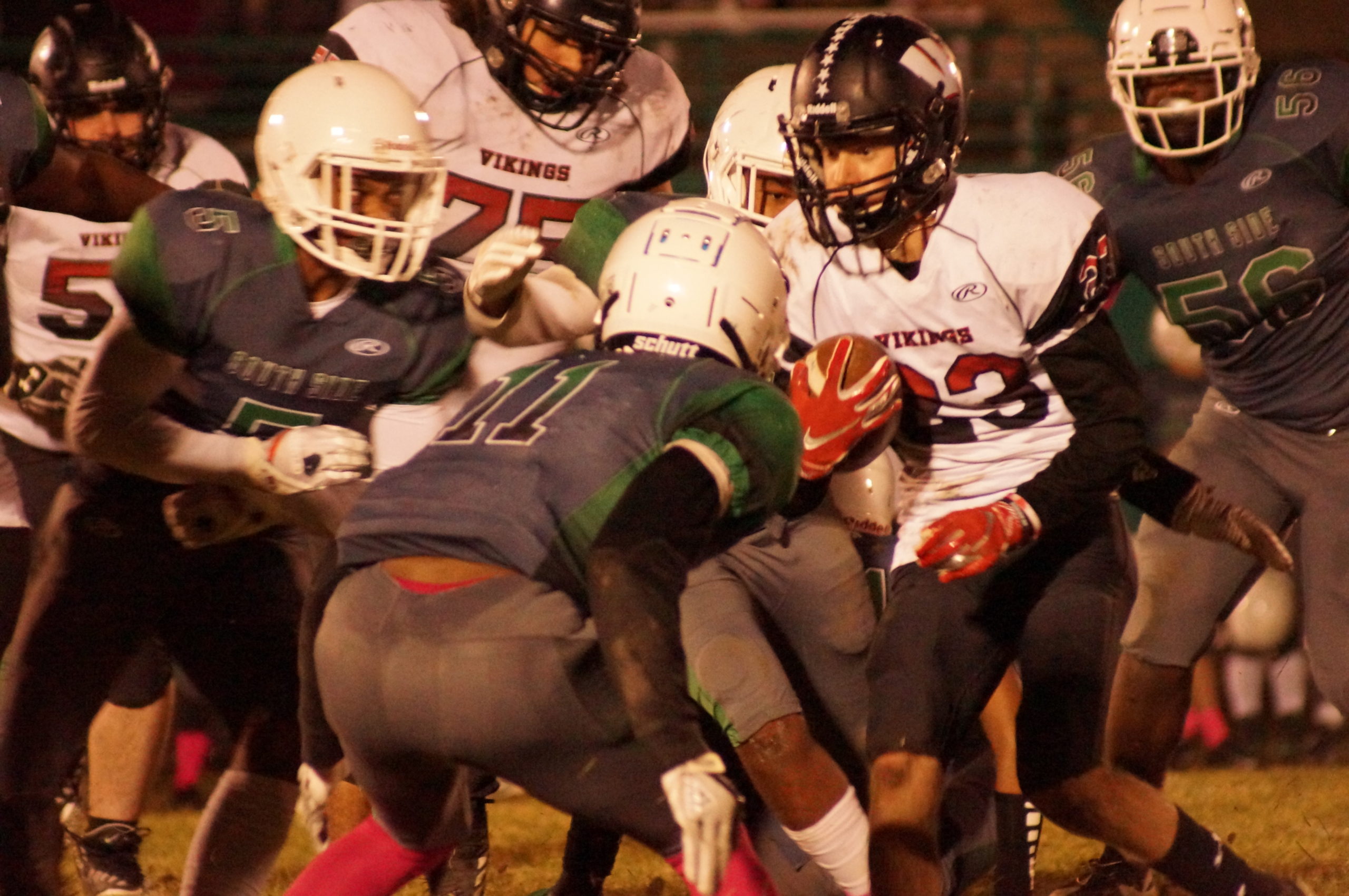 Huntington North at South Side

It was yet another game that South Side let slip between their fingers. The Archers season has come to an end after losing to Huntington North by 17, when at the end of the third quarter they were leading 12-7. They were outscored 30-8 in the fourth, as a result of 4 turnovers in the second half that set the Vikings up inside the 20 on numerous occasions.

Despite the fact that South Side played very well in a lot of games this year, it doesn’t feel like a successful season. Their final record is 1-9. They could have had a few more wins if they were able to keep their focus in the fourth quarter. Take their game against North Side for example. The Archers led 16-7 in the fourth quarter and then allowed the Legends to win 17-16. Progress was made this year, but it doesn’t show that in the win column. One thing that Coach Roosevelt Norfleet would like to limit is the mistakes that his team makes at crucial points in the game.

“We performed good in spurts. But, you can’t have the mistakes that we had. In their territory, we had a false start, mental breakdowns, then turnovers when we’re moving the ball. That’s been us for this whole year. We’ve been trying to teach and eliminate the mistakes and execute our assignments, but we haven’t been able to do it.

Our offense put up some numbers this year that we didn’t put up last year. Our defense had a lot more stops, but once again it’s the turnovers and mental breakdowns we have at key moments that make it so that we can’t capitalize.”

QB Roosevelt Norfleet III played well in this game, going 9-15 on his throws for 116 yds and a rushing touchdown. Dillon Jackson had a 25 yd pick-six that put South Side in front 12-7 and later had a 97 yd kickoff return for a touchdown. For Huntington North, it was RB Garrett Johnson doing most of the heavy lifting on the ground with 78 yds on 23 attempts. QB Reid Johnson was 4-5 for 26 yds and had 4 total touchdowns in this game. Overall, this game came down to who would make the most mistakes and it was South Side that was gifting the Vikings touchdowns.

The Archers’ season is over, but Huntington North will advance to play Mississinewa at home in the next round.

The Cadets were able to stop the rushing attack of Maconaquah and were able to score on offense while limiting their mistakes. QB Brandon Davis was on his game, throwing for 240 yds on 11 of 17 passing, with 3 total touchdowns. RB Amir Drew helped the cause with his 154 yds and 2 TD. Concordia was obviously well-prepared on defense and was able to hold the Braves to just 21 points. Only one team in Maconaquah’s conference was able to hold them to less this year. Concordia will move on and play Norwell in their next matchup.

This is the best Bishop Luers has looked all year as they shut-out the visiting Cougars. It was sophomore QB Carson Clark leading the charge for the Knights with his 245 yds through the air and on the ground, resulting in 3 TD and 0 Interceptions. Clark didn’t let Central Noble breath on defense as Luers kept pouring points on the Cougars as the game went along. They’ll look to find this same success next week at Eastside.

Wayne finished the year 0-10 with their loss to Marion on Friday. The Giants were moving the ball at will with RB Khalid Stamps rushing for 199 yds and 1 TD. Marion QB Keshaun Taylor was 3-4 for 99 yds, with all three completions being touchdowns. Wayne RB Shawn Collins put forth a great effort with 123 yds and 1 TD, but it wasn’t enough to give the Generals a win. Marion advances and will face off with New Haven next week.