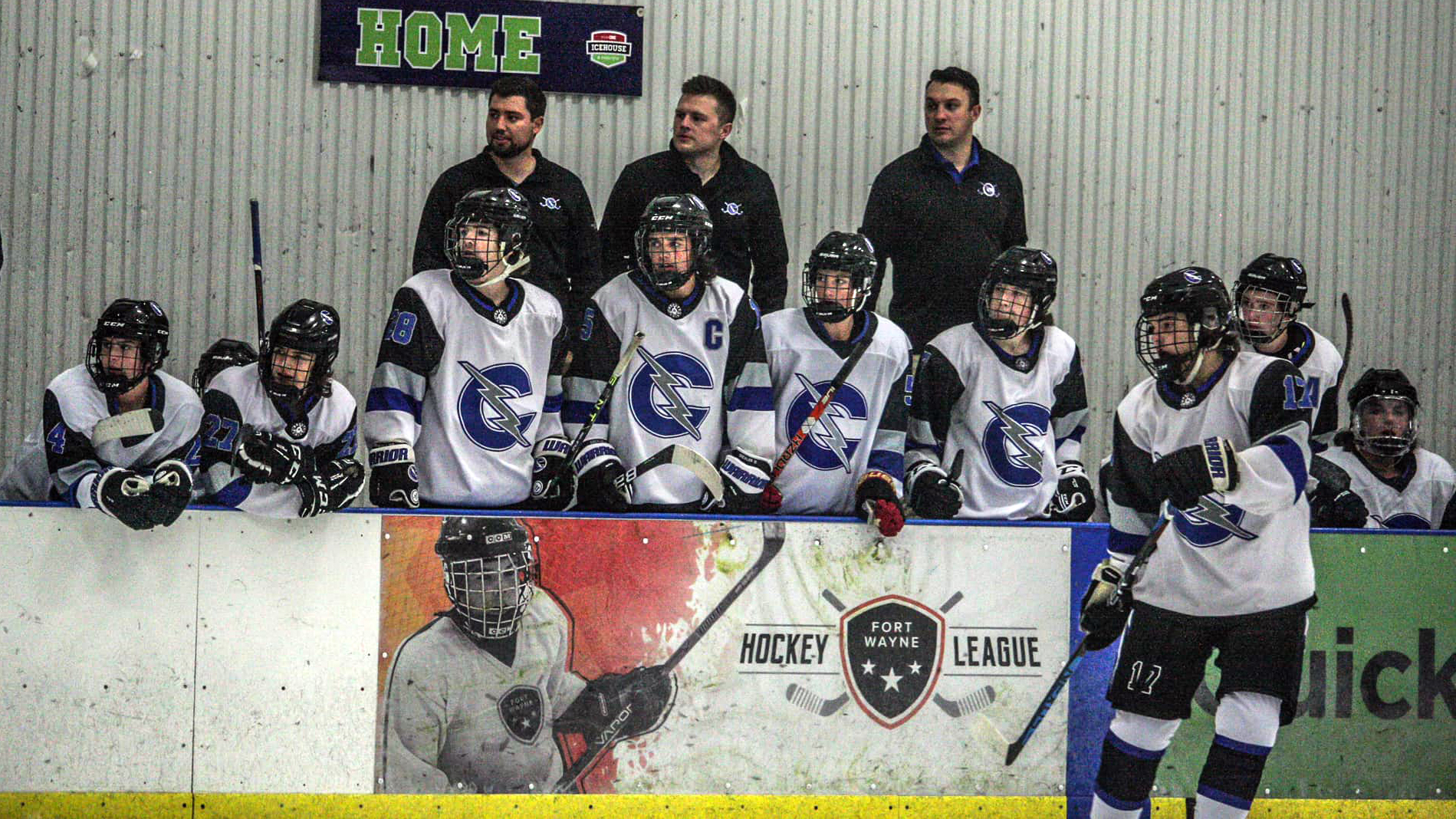 A great night of high school hockey took place on Wednesday and it saw Leo yet again beating the Vipers and at least for a few hours had the Lions tied with Carroll at the top of the standings. Carroll finally played a late game this week but the result remained the same as the Chargers walked away with a win. We’ll get into a little more detail down below…

Back in week one, Leo took down the Vipers off a tremendous performance in goal from Andrew Baumert, and maybe the Vipers underestimated Leo a bit. That second excuse wouldn’t be valid if a similar result came to fruition the second time around. The first period seemed destined to end without a goal until the final ten seconds. The Vipers nearly scored on a cross-crease pass from Robert Gross to Darcy Koch but Baumert was able to shut the door. Just after that Andrew Serafini poked the puck away from Michael Scully trying to make a move at the blue line. Skating into the zone all alone on the right side of the ice, Serafini was able to get a shot off just before the buzzer and put it past Ben Marques to give Leo the lead. Leo then caught some offensive fire in the first half of the second period, scoring three goals in the first 7:37 of the frame. Colton Calhoun scored the first of those three goals after it looked like the puck deflected in off Scully who was defending the net front. Serafini tallied his second of the game right off a faceoff, jamming the puck home with an assist from Caden Austin. Just about 90 seconds later and the Lions made it 4-0 when Dylan Davis collected a rebound on the backhand and put it past Marques, which would mark the end of the night for the Vipers goaltender who was replaced in net by Kamryn Clark.

Now trailing 4-0 the Vipers did what they could to cut into the lead before the intermission. That resulted in a goal from Scully, continuing his trend of scoring a nice goal against Leo. However, the good vibes for Fort Wayne were short-lived and another late-period goal from Leo reinstated the four-goal advantage. With 43 seconds before the intermission, Davis gathered the rebound from Calhoun’s shot and deposited it into the back of the Vipers’ net. The third period played out at the 5-1 score up until the last two minutes. The Vipers were finally able to cut the lead when Grant Knudson wristed a shot to the back of the net immediately following a faceoff win by Gross. Again though it didn’t take long for Leo to strike back. After Fort Wayne won the ensuing faceoff and Knudson’s D-to-D pass was broken up by Davis put the puck out into the slot where Calhoun found it and scored his second of the game, bringing his point total to three for the game. Despite being outshot Leo was able to walk away with a win over the Vipers again, with Baumert making 29 saves in another good performance. The win temporarily had Leo tied for 1st place in the league standings while Carroll was yet to play. Those two teams face off this Wednesday and should Leo come out victorious they’ll officially be tied at the top of the standings.

In the first go around for these clubs Homestead played well in the first but Carroll got rolling in the second period and ran out to a 6-0 win. This time Carroll still only put scored once in the first period, and it was a beauty. Carter Gnau collected the puck behind the net and fed it to the high slot for Brody Burge who quickly moved the play to Finn Cupp in the left circle who buried a one-timer into an open Spartan goal. Shots on goal were fairly even through the first period, Carroll put nine shots on goal and the Spartans forced Carson Carteaux to make six saves in the opening period. 41 seconds into the second period Carroll struck again. Burge tried to put it out front for Cupp and eventually the puck made it back to Burge standing at the side of the goal and he was able to score. The next significant moment in the game came in the Carroll end. Nick Tigner went for the puck below the goal line and Gavin Elkins delivered a big hit to him. Tigner was clearly not happy about it and when Elkins took a firm whack at the puck as it was covered by Carteaux, Tigner saw his chance to get at least a little revenge. His path to Elkins was obstructed but he got at a different Spartan instead, and then Elkins came at Tigner and cross-checked Tigner either on the neck or very close to it, but either way that was a pretty easy head contact/game misconduct call and Elkins’ night was over, he’ll also get to enjoy Wednesday’s game against the Vipers from the stands as a result.

A partially offsetting penalty to Tigner made it 4 on 4 for the first two minutes of Elkins’ major penalty but a cross-checking penalty to Henry Loxton after Tigner’s penalty expired gave Carroll a 5 on 3 power play. The Chargers were able to convert when Burge banked it off Connor Gould’s skate and into the net. Dylan Braun made it 4-0 Carroll on a one-timer from the right circle, finishing off a pass from Cupp. Three goals in the period weren’t enough for Carroll as they continued to hunt for another one. That came just before the buzzer when got to a loose puck and got it off his stick quick enough for it to get past Gould and into the net in time. That left Homestead facing a five-goal deficit and a running clock as the third period started. With the time the puck was actually in play reduced due to the running clock, neither team scored in the third period and Carroll improved to 4-0 in league play. Carteaux made 12 saves in the win.

Goaltending wasn’t great for the Vipers last week and that’s a good part of why they lost. Assuming that continues, I still think the Vipers will be able to win but it adds some intrigue. Elkins being out for Homestead hurts and is obviously a factor as well.

Baumert didn’t look great the last time these teams played which led to Carroll putting eight on them. I doubt that will happen again so I’ll say four goals for Carroll