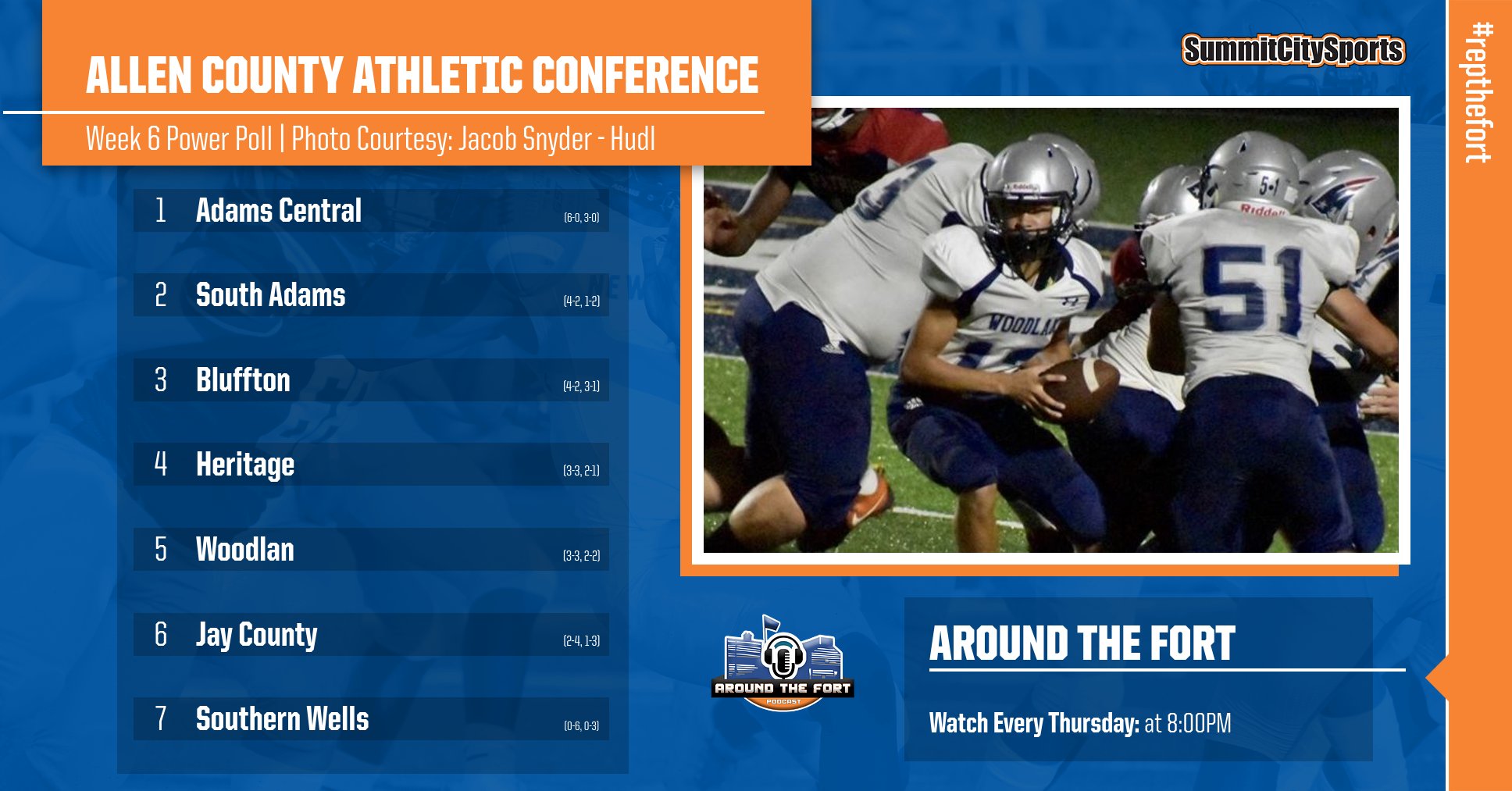 Week 7: vs 1A Southern Wells

Not much needs to be said here. Adams Central doubled-down on their 1st place spot in the ACAC with a dominant performance against a ranked South Adams squad. 49-20 doesn’t do the Jets justice, as this was a truly dominant performance, even more so then the scoreboard implies. A bout at home vs Southern Wells should be no more than a cake walk for the Flying Jets, and the rest of the regular season doesn’t seem to pose any threat.

South Adams: thank your lucky *star* Heritage lost to a very mediocre Lapel team, or else it would be the Patriots sitting at the #2 spot. It was a tough (but expected) loss to arch rival Adams Central last week, but they have a great opportunity to rebound against a very beatable Jay County squad. A pretty easy schedule to round out the regular season for the Starfires, so I don’t see them falling from the #2 spot.

Bluffton continues their slow climb up the power poll, this time after a beatdown of Southern Wells on the road. The Tigers scored 43 of their 50 points in the first half alone. Running back Anthony Cruz hit the end zone for two rushing touchdowns, quarterbacks Axton Beste and Declan Grieser both got a score through the air, even punt returner Andrew Hunt hit pay dirt with a 60-yard punt return touchdown. A goose egg on the Raiders’ side of the scoreboard was just icing on the cake. A battle this week with Heritage will pose a much more competitive game, but Bluffton has more than prepared themselves for the Patriots.

Heritage is coming off a tough out-of-conference defeat against Lapel. The game came down to quarterback play, in which the Bulldogs dominated. Heritage QB Kobe Meyer struggled, completing 9 out of 23 passes for 128 yards, zero touchdowns, and an interception. Meanwhile, Lapel freshman QB Devin Craig completed 19 of 26 passes for 262 yards, two scores, and no interceptions. Bluffton will pose quite the challenge this week. Heritage will have to limit mistakes big time to top the Tigers at their home field.

Week 7: vs 4A Culver Academy

The Warriors got a much-needed win last Friday night on the road at Jay County. Senior quarterback Jacob Snyder had a great game. 215 passing yards for two touchdowns, and 72 yards in seven carries for another pair of touchdowns (not to mention a game void of interceptions). His best performance of the season could not come at a better time, and the offense will definitely be carrying that newly gained swagger back home to host the Culver Academy Eagles, who have lost five straight. Welcome to the ACAC Top-5, Woodlan.

A tough defeat for Jay County at home versus a tough Warriors team. It’s not like the Patriots played poorly, they just got outplayed by a fiery Woodlan offensive onslaught. This three-game losing streak has been very unkind to Jay County, with two blowouts versus Adams Central and Bluffton, along with the heartbreaking defeat last week. It doesn’t feel like things will get much better for the Patriots, as this Friday they host 1A’s #9 South Adams, a team coming off a heartbreaking defeat versus ACAC frontrunner Adams Central. Their other remaining opponents, Lapel and Heritage, will certainly give them issues as well. If they don’t clean up their defense, which has given up 40.7 points per game since Week 4, this three-game losing skid could easily turn into a six-game losing skid by the end of the regular season.

Well, I didn’t think things could get much worse for the winless Raiders, but they did. Bluffton not only held them to their least amount of points all season (0), but also scored the most amount of points on Southern Wells all season (50). This week’s game at Adams Central won’t be much easier on the Raiders. Like I said last week, I’m not seeing a regular season win for Southern Wells. Just hope that the Raiders get a lucky sectional draw and get matched up with North Miami, the only team I can see Southern Wells competing with in Sectional 44.