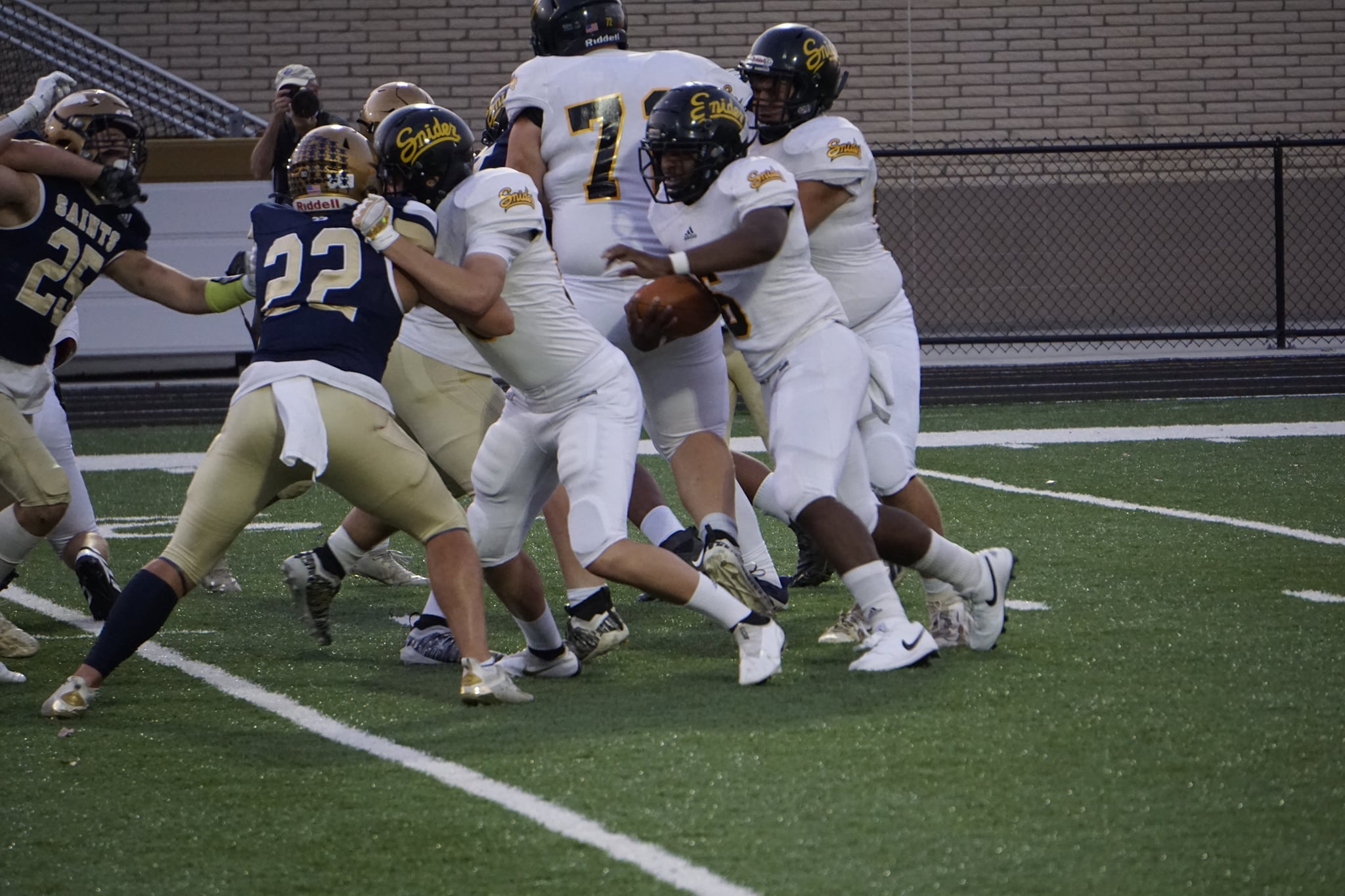 Week 9: at South Side

Everything has gone right for the Spartans lately. Though Evan Ormsby didn’t start off great, he’s been the best quarterback in the conference in the second half of the season. While Homestead hopes that his 1,246 yards and 21 touchdowns over the course of four weeks continues, they also have to be happy with the way that RB Braeden Hardwick has been playing. He has 365 yards and 3 touchdowns while averaging 15.9 yards per carry over the past two weeks. Homestead is getting hot at the right time and showing no sign of slowing down.

It took a tremendous fourth quarter effort for the Saints to fight off a pesky Snider team, but the resilience they showed should give Dwenger confidence that they can pull it out in close games. Their defense has been anchored by two tackle-for-loss machines in John Michael Fabini and Devon Tippmann. The linebacker tandem now has a combined 23.5 TFL and 12.5 sacks. As long as these two can keep making plays, Dwenger will find themselves winning ball games.

Similarly to Dwenger, Carroll had to scratch and claw their way to victory. Though Jeff Becker didn’t have a great game through the air, Carroll had an important development on offense. RB Luke Carmody rushed for 84 yards on 14 carries, good for a 6 yard average. This performance by their tailback against a really solid Concordia defense is very promising. Becker has not only done a ton of work through the air but is also the Chargers leading rusher with 545 yards and 75 attempts. If Carmody can prove once again that he can be a reliable back, it could open things up some much more for Carroll’s offense and take some pressure off of Becker.

They didn’t win it, but they sure gave Dwenger a run for their money. Coach Tippmann had to have been proud of the effort that Snider gave on Friday and how they matched Dwenger’s intensity for most of the game. The most impressive aspect of this game might have been how well Snider’s defensive front matched up with Dwenger’s offensive line. They got some major penetration on Lytle and forced him into 2 interceptions and bottled up the Saints rushing for only 3.5 yards per carry. However, this was just one game. Snider will have to show this same fight in their final game against Luers to keep momentum in their favor heading into their sectional with Homestead.

Week 9: at North Side

There was a lot to like from Concordia’s loss to Carroll, specifically early on defense. Holding the Chargers to only 9 points in three quarters almost feels like something to celebrate this year. It’s just a shame that this is a four quarter game. They have another opportunity to bottle up North Side’s prolific offensive attack this week, and this time come out with a win. In the meantime, Kam Johnson continues to make some impossible plays possible on offense and this week had 31 yards on 4 carries, including a fantastic touchdown run. He’s also been one of the best return men in the conference with a average of around 30 yards per return on punts and kickoffs as well as 2 touchdowns.

For the fourth time this year, RB Damarius Cowen had over 200 yards on the ground. There’s no way around it, he’s been phenomenal and currently ranks as the 16th best rusher in the nation, with 1,408 yards, 6.6 yards per carry, and 13 touchdowns. It would take an incredible effort for him to go over 200 yards against Dwenger’s defense, but it’s certainly possible, and if he does it’s also very possible for Northrop to win the game.

North Side is struggling to find consistency in the win column and despite RB Jasuan Lambert matching Cowen touchdown for touchdown on the ground, the Legends couldn’t finish the deal at Northop. Still, Lambert has been a reliable rusher for North Side with 993 yards and 10 touchdowns, and figures to have another big game this week against Concordia.

Luers improved their win total to 3 after RB Sir Hale was able to come away with 187 yards and 2 touchdowns. Hale is another player like Evan Ormsby that has turned things around in the second half of the season. Since week 5, Hale has 485 yards, 7.1 yards a carry, and 5 touchdowns.

Though South Side fell to Luers on Friday night, they might have found something in QB Quincy English. The junior threw for 222 yards and 3 touchdowns, many of which came WR Javonte Malone’s way. Malone also had a nice game with 6 receptions, 122 yards and 2 touchdowns. If the Archers can make this a weekly occurrence on offense they might be able to hang around against some other teams in the SAC.

Wayne was the latest victim of Homestead’s high volume aerial attack and was blown out on their home field. Despite that, the Generals had a new QB under center, sophomore Christian Trimble. He actually fared quite well for his first appearance, completing 6 of his 10 passes for 58 yards and 2 touchdowns. Not a bad start to a high school career.