An Unforgettable Season: Recapping the Best Moments of SAC Football in 2021 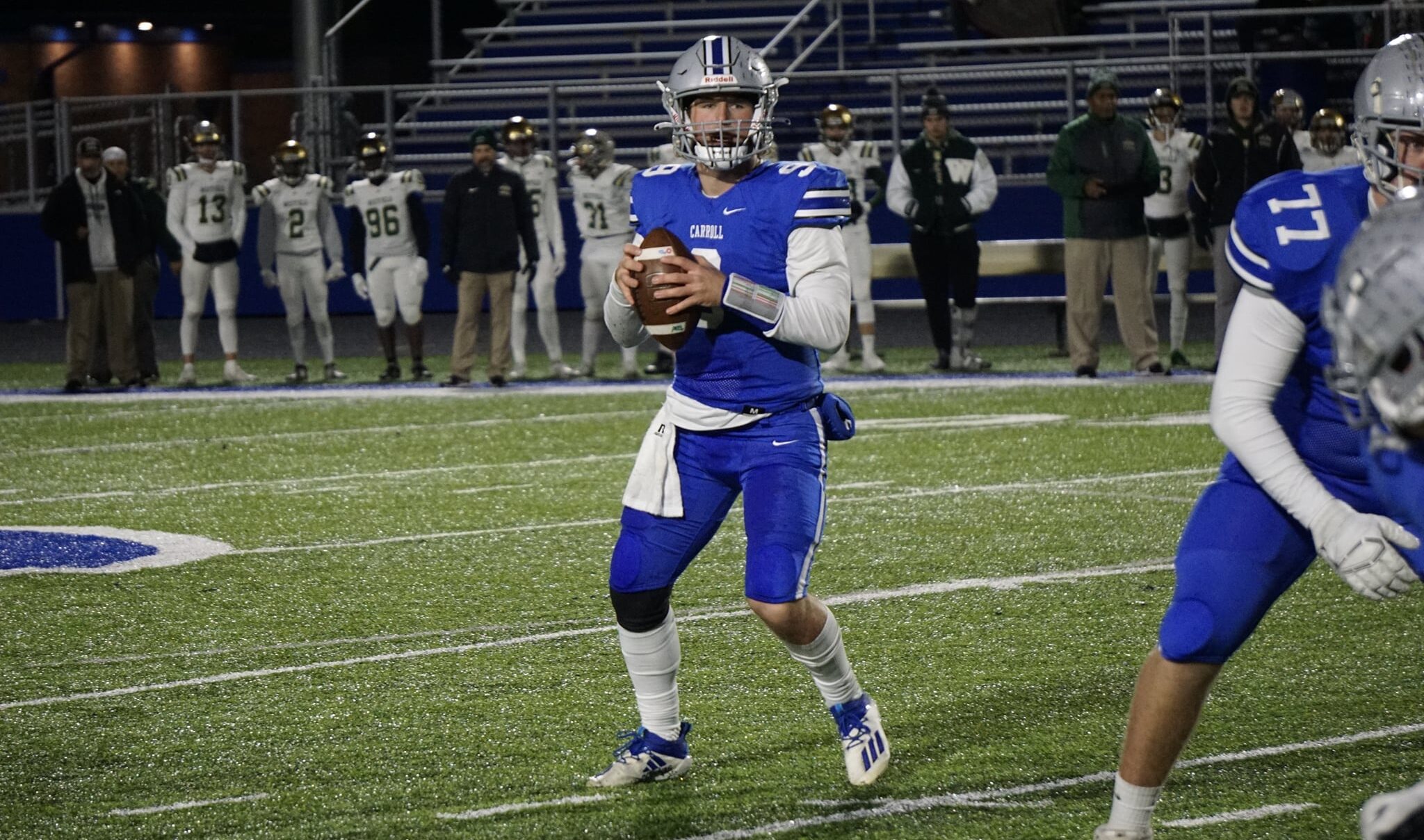 “I can’t express how many fun times I’ve had with every single one of my teammates. You can never get that anywhere else in life. I’m going to miss it so much.”

Carroll’s season ended on their home field Friday, as they fell to Westfield 37-14. The Chargers gave it their all but couldn’t quite muster enough offense to keep up with the Shamrocks. Carroll’s defense held Westfield to just 10 points in the first half, but Westfield was able to break through in the second. Multiple players, mostly seniors who had given it their all this year, gazed across the field at the winning sideline, their attention caught by the elation that the Shamrocks showed after winning their 6th regional in school history.

Despite the loss, this was a season of breakthrough for the Chargers. They were finally able to beat Homestead. They finally earned a share of the SAC. And they finally won their 6th sectional title. Not to mention all of the notable achievements this team had, such as making Coach Doug Dinan the winningest in school history and Jeff Becker becoming Carroll’s all-time leading rusher, as a quarterback nonetheless.

It was a similar scenario for Dwenger, who fell to Zionsville 35-14. This was a season of redemption for the Saints. They managed to win their first three games, but there were obvious flaws present. These flaws were exposed against the likes of Homestead and Carroll, resulting in major criticism thrown at the coaching staff. However, Dwenger kept improving. The offense found its spark and nearly gave Luers their first loss of the season. All of this culminated in perhaps their biggest win of the season, a blowout victory over Snider to win sectionals. It was then that Coach Jason Garrett hugged his entire staff and players after the game with pure joy on his face. Yes, football is an emotional sport.

After what coaches and players had to put up with in 2020, this year felt like a renaissance, as everything returned to the way it should be in high school football. That’s why we decided to take a look at some of the best and most memorable moments of the 2021 SAC football season.

After a North Side touchdown to take a late lead, Snider needed a miraculous drive to stay alive. After escaping disaster by recovering a Tyrese Brown fumble, Snider was able to get in fringe field goal range. As it turned out, that was more than enough for kicker Nick Talamantes who would hit a game winner from 47 yards out. This kick killed North Side’s season as they would go on to lose 6 of their next 8.

Common football logic says that a backup shouldn’t be able to find success against an elite defense. Well Carroll quarterback Owen Scheele defied all logic, as he threw for 284 yards and 3 touchdowns against Snider in place of the quarantined Jeff Becker. But the defining moment of the game came when Scheele took his Chargers down the field, converting third and fourth downs, leading to a strike to Jameson Coverstone to give Carroll the win.

In just his second game leading the Archers, Head Coach Guy Lee was able to take down the Northrop Bruins, as South Side would win their first home opener since 2008. All of this came behind a great effort by Jaylen Lattimore, who rushed for 3 touchdowns in the game.

In an incredible turn of events, Homestead found their way back into the game against Luers. But a costly turnover inside the Luers 10-yard line would prevent Sparty from putting the game away. All this would do is give Carson Clark and the Bishop Luers offense another chance to find the end zone. Guided by their senior quarterback, the Knights would drive down the field and score, culminating in RB Sir Hale taking it in with just 13 seconds to go, keeping Luers undefeated.

On a thrilling night of football, Luers and Carroll both ended lengthy losing streaks to their arch rivals. Carroll managed to hold Homestead to just 10 points in what was a terrific defensive effort, ending with a stop on 4th down. Luers won in an all-too-familiar way, driving down the field and taking a late lead. But there was another great game that night which didn’t get as much attention. This was when North Side beat South Side 29-26 thanks to a go-ahead score by RB Jontae Lambert late in the game, giving them their 55th victory in the series.

You can thank Snider for the SAC having 3 co-champions this year. Well, either them or the horrendous field conditions that a wet, October day presented at Luersfield. The Panthers were able to take advantage of those conditions by utilizing their leading rusher Tyrese Brown to grab a win. The result would cause Snider, Luers, and Carroll to each earn a share of the title.

One of the longest head-to-head streaks in the conference almost came to an end in the sectional round of the postseason. Snider looked sluggish and allowed Northrop to grab the lead and stay there for much of the game. It wasn’t until late in the fourth quarter that Snider would take that lead back. At that point, Northrop still had enough time to go the length of the field themselves, but couldn’t quite muster a first down in Snider territory, ending the Bruins chance to pull off a major upset.

With all that Dwenger went through this season, beating a hated rival to win a 5th straight sectional crown was a monumental accomplishment. Dwenger didn’t just win this game, they won convincingly. The Saints put this game out of reach in the second half, as all Snider could do was watch their dreams of having a deep postseason come crashing down.

A Thank You Note, From the Writer:

As my time covering football at Summit City Sports comes to a close, I would like to briefly thank everyone who made it possible. First I’d like to thank Jeff Mahoney, who gave me an opportunity to write for this website three years ago when I was only a sophomore. He has given me countless opportunities and encouraged me in my writing. None of this would be possible without the trust that he has given to me, just a high school student, to be a major contributor to Summit City Sports. I would like to thank everyone else at Summit City Sports, who welcomed me in, despite the fact that I was so much younger than they were. I’d like to thank all the players and coaches that I interviewed, who were patient and respectful, especially as I was starting out. And finally I’d like to thank you, the reader. Whether this be the first time you’ve read something of mine, or if you’ve scrolled through every single article, I greatly appreciate it. You’ve made it all worthwhile and have contributed to a dream that I’ve had since I was a little kid: to cover sports in front of an audience. As I continue to make my way through my senior year and beyond, I will never forget the experiences I was able to have, as a writer, photographer, and announcer for Summit City Sports.