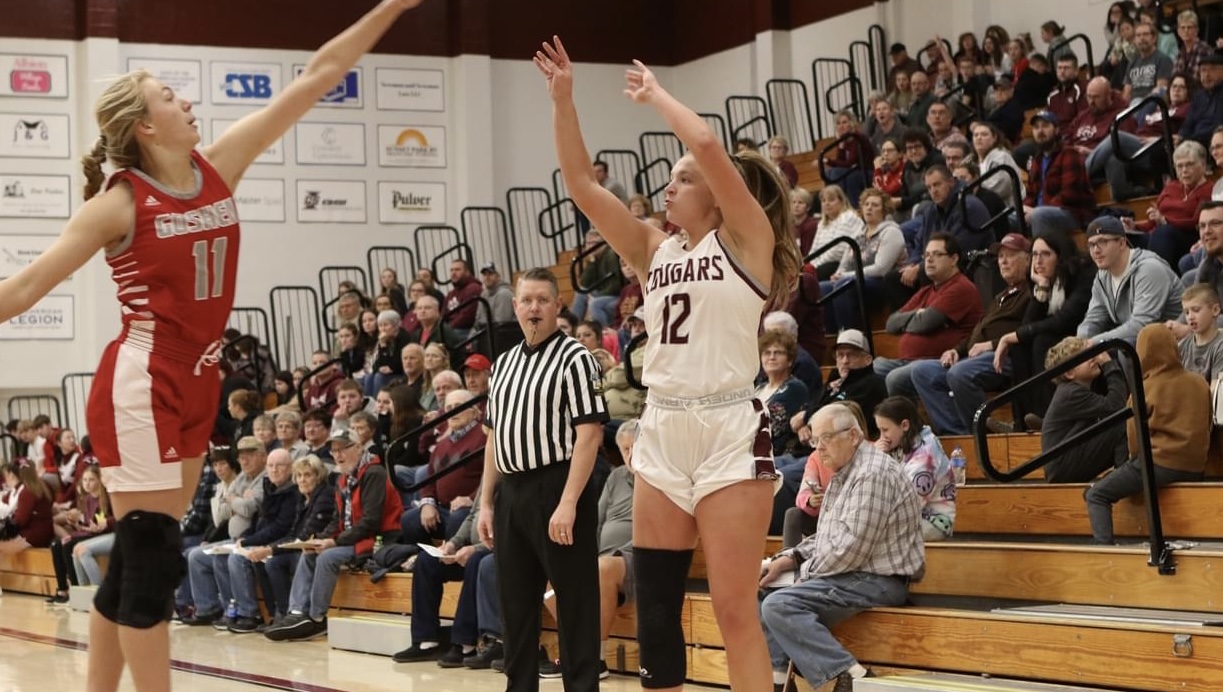 This was a week of impressive performances among several teams in the NECC. Central Noble is the only unbeaten team left in the NECC and the only team that’s 4-0 in NECC play after beating Angola 44-30 behind 20 points from Madison Vice and 17 points from Meghan Kiebel (pictured above).

Hope Bortner reaches career highs with 29 points and 7 three-pointers (ties a program record set by Grace Hales) in a 55-29 win over West Noble last Thursday. And Fremont has wins in their last 3 games with wins over West Noble, Edon (Ohio), and Heritage. Despite CN’s second ever 10-0 start, Fairfield remains the team to beat in the NECC.

This game provides a matchup between two strong guards in senior Bailey Kelham of Garrett and junior Hope Bortner of Westview. Kelham currently has 1,380 career points, which is 52 points behind the program’s current scoring leader Brandi Dawson. Kelham leads the NECC with 17.7 points per game, but the next highest scoring player (Kelsey Bergman) is averaging 7.3 points per game.

For Garrett to get this win, someone has to have a good game on that side of the ball. Westview plays excellent man-to-man defense, but their lack of size presents a huge challenge against Garrett’s size and their 34.1 rebounds per game. Westview will need a good night from their perimeter offense that is currently shooting 37% from 3.

This is a battle between two teams that have faced their fair share of ups and downs so far this season. But Angola does have the advantage of posting the tougher strength of schedule where 6 of their 10 games came against teams with a winning record (and we’re talking elite teams).

Leo started the season 5-1 but has since lost their last 5 games. Leo is 3-2 in single-digit games, so they’ll have to make sure they’re able to hang around in this one. On paper, both teams average exactly 30.1 boards per games, but Angola averages more offensive boards than Leo (10.9-9.5).

That’ll be the difference tonight as both teams have struggled to shoot the basketball. Both teams are shooting below 40% from the field, but Leo is shooting 34% from 3, compared to Angola’s 25%. Turnovers will be factored into this game as well.

On paper, this looks like one of the better matchups of the week for NECC girls basketball. Lakeland has won 5 of their last 6 games since Olivia Oman made her debut for the Lakers and hold the 5th best offense in the NECC.

But the defensive side of the ball is the 4th worst in the NECC allowing over 46 points. That’s going to be challenged a strong Fairfield team that has IWU commit Brea Garber and her 1,093 career points, along with a strong cast led by Bailey Willard and Morgan Gawthrop.

Lakeland will need some shots to fall as their frontcourt will be challenged against the length and physicality of Fairfield’s zone defense. Lakeland is 4-0 when they shoot 40% or better, but this will come against one of the two number top-ranked defenses in the NECC (Fairfield).

These are two teams at or near the bottom of the NECC. For West Noble, it’s a rebuilding year for the Chargers after several years of sustained success. On the bright note, senior Mackensy Mabie is averaging 13 points, 4.4 boards, 1.4 assists, and 2.1 steals per game.

However, the rest of the team is only generating 17 points per game. Despite being 0-7, West Noble doesn’t do a horrible job on the glass as they average nearly 24 boards a game led by Alayna DeLong’s 7.3.

Rebounding will be crucial against a Busco team that’s been on a cold streak. Busco is shooting just 24% from the field and 21% from 3. But they do have some size and grit inside to generate 27.6 boards per game. It’ll come down to the combination of Kena Hamman inside and the perimeter threat of Brooklyn Sinclair, Hailee Gaerte, and Bridget Timbrook.

The Mennolands is the site for a sneaky good regional matchup in Goshen, IN. Don’t let their conference (The Hoosier Plains Conference) fool you. Bethany Christian is very good at basketball this season led by the dynamic junior duo of Mariah Stoltzfus and Zoe Willems.

Both kids combine for 32.6 points, 11.3 boards, 7.6 assists, and 9.5 steals per game. As a team, Bethany shoots 37% from the floor and 28% from 3. While they don’t present the strongest strength of schedule, Bethany has held opponents to just 34.7 points per game, and they competed well with Central Noble in the 51-39 loss 2 weeks ago.

This is a game where if Lakeland can somehow contain Willems and Stoltzfus, they’ll have a good chance of winning. That’s IF they can contain them. Willems is coming off a career night with 33 points, 13 boards, 6 assists, 6 steals, and a block against Prairie Heights last Thursday. I can see the Lady Bruins with the upset because the Mennolands is a tough place to win on the road.