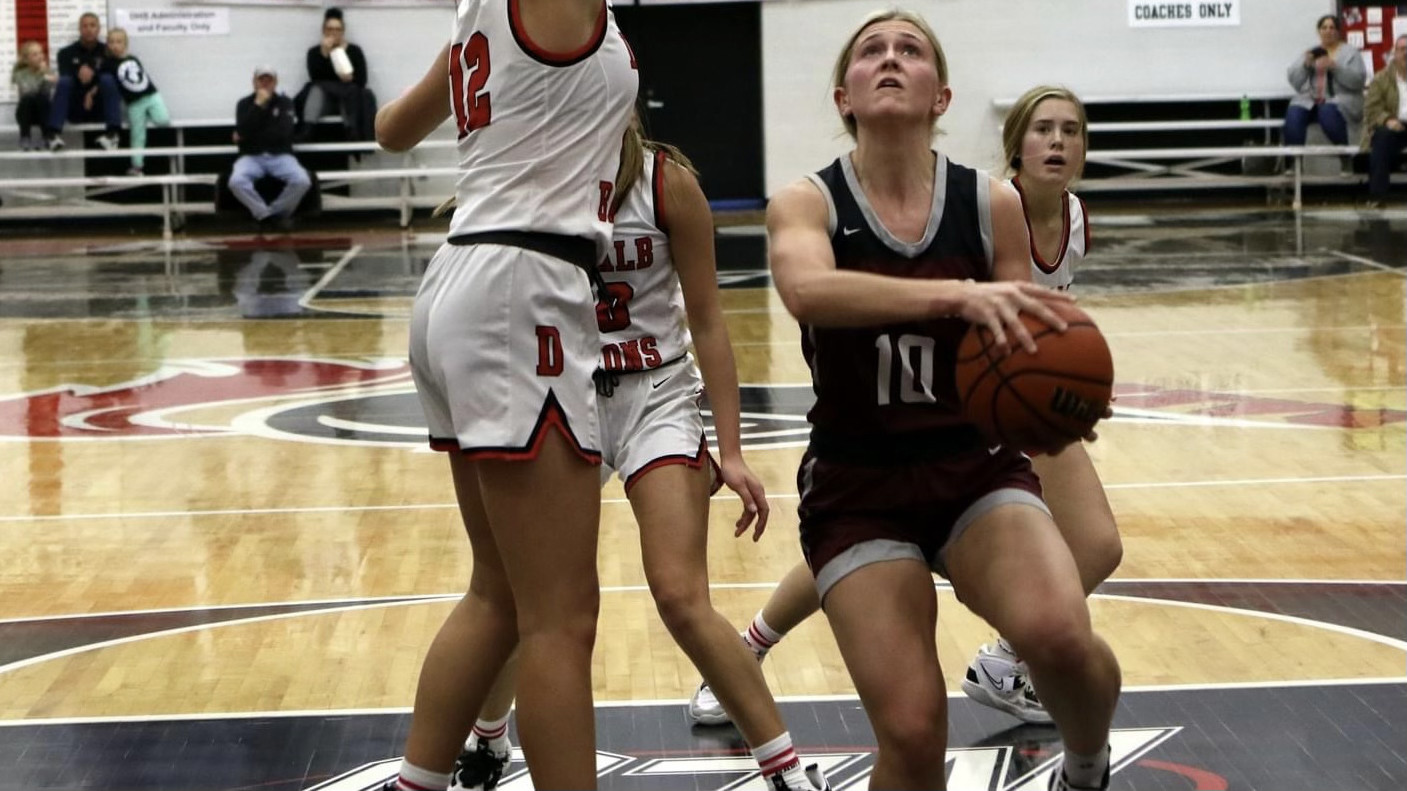 Thanksgiving has come to an end, and now it is time to transition to December where the heart of conference competition is set to begin for girls’ basketball. Central Noble’s lone game this past week saw the Lady Cougars posting a 62-36 win at Lakeland. Madison Vice (pictured above) had 27 points and 4 assists, while Kyleigh Egolf drained four 3-pointers.

Eastside continued its winning ways last week with an impressive 61-53 win over Bishop Luers, led by another 23-point outing from senior Grace Kreischer. The NECC’s conference action was mainly centered around last Tuesday’s Angola-Garrett game at Paul Bateman Gymnasium. A 16-0 run between the third and fourth quarters propelled Angola to a 32-19 win over Garrett, where they held Bailey Kelham to just 7 free throws.
Fremont picked up its first win of the season thanks to a career-high 25 points from sophomore Addy Parr in a 46-36 win at West Noble. Despite shooting 18% from the floor, junior Kelsey Bergman had a game to remember as she recorded a triple-double (18 points, 23 rebounds, and 11 blocks) in the 45-36 Garrett win at Prairie Heights.

Lastly, this past week was concluded with the annual NECC/NLC Shootout (held at Northridge) where Angola split the two games with Concord and Northridge, while Fairfield took both games. For the second year in a row, Fairfield defeated Northridge, this time by a score of 49-46 (Morgan Gawthrop had 19 points in that game).

This week will see two crucial games for Angola as they travel to Fairfield Tuesday before hosting Central Noble Friday.

Benton will be the site of a huge NECC girls’ basketball game where the Falcons continue their quest to win a NECC championship. Previously, these two met a year ago at Angola, where the Falcons shot the 3-ball well in their 56-47 win. Against Concord, Angola was 9-21 from 3 for 43% in the 66-23 win. However, Angola has only shot 25% from 3 this season.

Angola was 9-23 from 3 against Fairfield last season and grabbed 31 rebounds. But the Hornets were just 6-15 from the charity stripe and struggled to defend the versatility of Fairfield’s shooters. Angola is currently averaging 30.1 boards a game, which will be a decent challenge against the length of Fairfield and their zone defense. But can Angola’s 1-2-2 press perform just well enough to contain IWU commit Brea Garber?

Eastside is off to their best offensive start to this point since the 2010-11 season as they are averaging 48 points a game. And their schedule has not been a cakewalk as they did this against teams like Angola and Bishop Luers. They hope to avoid a setback against a senior-heavy Woodlan squad in their final season under the retiring Head Coach Gary Cobb.

Woodlan is coming off their worst outing of the season at Jay County, where the visiting Warriors shot 27% from the floor and only grabbed 15 rebounds. Meanwhile, Purdue Fort Wayne commit, Renna Schwieterman dropped 19 points in a 60-22 Jay County win.

Clearly, Woodlan has to get back to the drawing board and play strong Woodlan defense against a tough Eastside squad. The question with Eastside is: Can they slow down Avah Smith and stay out of foul trouble?

In their last meeting at Lakeland, CN shot 44% overall and 41% from 3 against Lakeland. On the season, CN has only shot below 40% three times this season. They also grabbed a season-high 39 rebounds (16 offensive boards) against a smaller Lakeland team. On the season, they are averaging 28 boards per game.

However, the Hive has been a “House of Horrors” throughout most of the 21st century for Central Noble as they head into Angola with losses in 9 of their last 11 games at this very place. In their last meeting, CN shot 42% from the floor, but they turned the ball over 15 times, and Angola made six three’s.

Unlike, last year, now Angola has to respect the frontcourt more thanks to the addition of freshman Grace Swank, but Angola will have to figure out how to score on Coach Malcolm’s 1-3-1 press.

A DeKalb rivalry showdown that is usually owned by Garrett in recent memory. However, a resurgence from Eastside as a whole, and Garrett rostering a very different (less talented) roster leads to what should be a coin-toss on paper.

Offensively, it has not been pretty for Bob Lapadot’s Railroaders as they are averaging 38 points a game. Despite averaging 37.5 rebounds and 8 blocks in their last two games, Garrett has shot below 20% in both games against Angola and winless Prairie Heights. During the Heights game, Kelsey Bergman and Bailey Kelham became the first duo in program history to record 20 or more rebounds in the same game.

On paper, they might be able to crash the glass and get stops on defense. BUT can they make enough baskets? As Bob will tell you, they force teams to beat them through the 3-ball. While that hasn’t hurt their defensive performances (other than the DeKalb game), Garrett is shooting an abysmal 19% from 3, and shot below 10% from distance in their last 2 games. Keep in mind, last season’s team shot 34% from 3, so right there indicates a pretty substantial issue.

Garrett will also need to clean up the turnovers and keep the players out of major foul trouble. That will be a concern against Grace Kreischer and Kaylie Hertig inside. Eastside’s last win against Garrett came in the 2017-18 season.

This week, Busco will be playing their first games since November 17, where they lost 60-24 to Fairfield. You can only hope that time off was beneficial and getting a reset for conference play. Busco’s last three games saw them struggling to make baskets as they scored below 40 points in their last three games.

Just two years ago, Westview was just 3-20 and lost 19 of their 20 losses by double figures. Last season, it improved to 6-17, and right now seem to be in a much better position than last season by itself. Westview is winning games through their defense as they are giving up 38 points a game.

While Westview is only scoring 38 points a game and shooting 36% from the floor, they are starting to find their strides with the 3-ball, as they are 38% from distance. In fact, all four Westview players that have made a three are shooting 40% or better from distance (Andrea Miller team-best 47%, Kam Miller 43%, Hope Bortner team-best 17 made 3’s and 42%, and Mykayla Mast 40%).

The one major challenge Westview will face in this game is rebounding as they are one of the 260’s smallest teams for girls’ basketball and averaging 20 boards a game. Busco is averaging 27.3 boards a game led by Kena Hamman’s 6.8. But can Busco make enough baskets? They are only shooting 24% from the floor and 21% from 3.