Leslie Johnson Being Inducted Into The Indiana Basketball Hall Of Fame 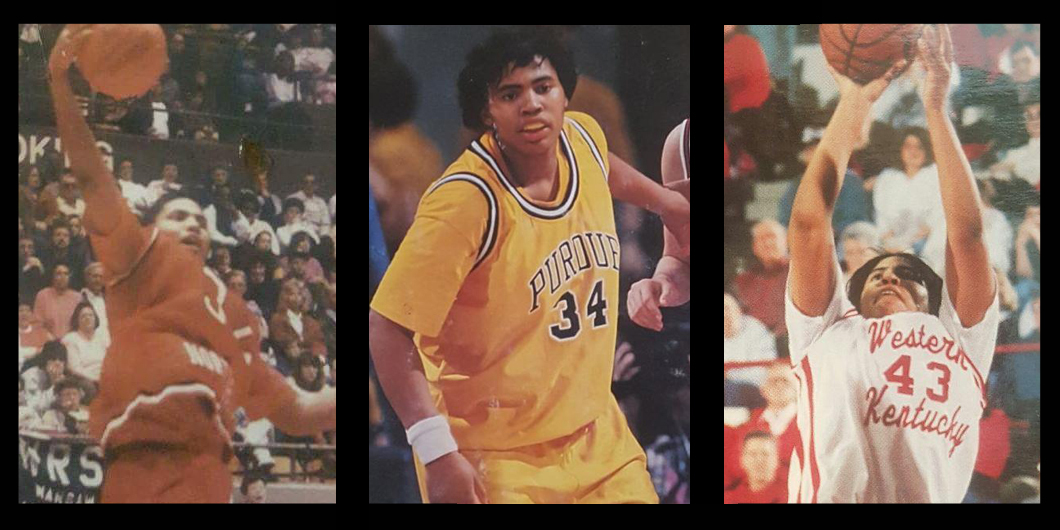 Leslie Johnson was a 1993 Indiana All-Star and high school All-American after graduating as the 7th leading scorer in IHSAA girls basketball history with 2,045 career points and 1,282 rebounds.  Johnson led Fort Wayne Northrop in scoring for four seasons, including 28.4 ppg as a senior for the 25-1 Bruins.  She also averaged 14.1 rebounds with 75.1% FG as a senior en route to 18 school records, including 739 season points and a 71% career FG%.  She earned four-time SAC all-conference honors, leading teams to three SAC championships, three sectional championships, three regional titles and three semi-state finals appearances.  She set the Indiana All-Star record with a 29 point single-game performance in a 113-51 win over Kentucky.  She was named the consensus NCAA National Freshman of the Year, 3rd team All-American and the first freshman to earn 1st team all-Big Ten honors, leading Purdue University in scoring (18.5), rebounds (9.1) and FG% (.596) as they reached the 1994 NCAA Final Four.  She transferred to Western Kentucky University where she became first player to surpass 1,000 points in two seasons, with 1,079 points and 472 rebounds in 64 games, earning two-time all-conference and two-time honorable mention All-American honors.  In all, she totaled 1,860 points and 861 rebounds in 3.5 seasons of college basketball.  Drafted by the WNBA Washington Mystics, she played professionally in Greece, Turkey, Israel, South Korea, Portugal and Spain.

Leslie Johnson, a native of Fort Wayne, Indiana; was selected to the 2018 Indiana Basketball Hall Of Fame Silver Anniversary Team, for outstanding accomplishments and achievements throughout her basketball career.  In 1993 Johnson completed her career at Fort Wayne Northrop as the Indiana North East Career scoring record holder of 2045 Career Points and 1,282 Rebounds.

That same year she led Northrop to a 25-1 school record averaging 28.4 points per game, 14.1 rebounds, while shooting 75.1 percent from the field.  Leslie would lead Northrop to 3 Sectional and Regional Titles, and appearances in the Semi-State Final games.  She became the first to become a 4 time High School All Conference All-S.A.C. team member, and in 1993 she was voted U.S.A. Today 1st Team All American, 1st Team All State and scored an Indiana record breaking 29 points in the Indiana All-Star game. Leslie still holds 18 Northrop High School records as of 12/11/2018, more than 25 years later.

In 1994 she became the first freshman in Big Ten History (men or women’s) to be named 1st Team All- Big Ten while playing for Purdue. After transferring to Western Kentucky, she became a 2 Time First Team All-Sun Belt Conference player in 1997 and 1998; completing a streak of being named 1st team All-Conference in every full season of High School and College basketball she ever played in.

While at Purdue she was selected as a 3rd team All-American by the U.S. Basketball Writers Association and Honorable Mention All-American by Kodak in 1994. In 1998 at Western Kentucky she would again be named All-American, but this time on the Associated Press Honorable Mention list.  Leslie would be named 1st Team All Freshman Big Ten, Big Ten Conference Freshman Of The Year, First Team All Big Ten, and National Freshman of the Year by the Basketball Times, U.S.A. Today, and USBWA in 1994, after leading the Purdue Boilermakers to a Big Ten Title.

She set Purdue freshman records of 628 points, 243 field goals, 141 free throws, 308 rebounds, and 12 double –doubles all of which still stand as of 12/11/2018.  Leslie’s 308 rebounds remain the number 7 single season mark in scoring of all time at Purdue, the 243 field goals stands as the number 6 highest, the 308 rebounds are the 3rd most of rebounds in a single season at Purdue, and her mark of 138 offensive rebounds still stand as number 1 in Purdue History.  All leading to the first time in Purdue History, that a Freshman was named the team’s Most Valuable Player. Johnson lead Purdue to their first ever appearance to the NCAA Women’s Final Four in 1994 after averaging 18.5 points, and 9.1 rebounds per game that season, and being named the NCAA West Regional Most Outstanding Player.

After College basketball where Leslie tallied career totals of 1,860 points, 861 rebounds, shooting 58% from the field in 3.5 seasons played; Johnson went on to become the 1st player from Fort Wayne, Indiana to play in the WNBA –  when she played for the Washington Mystics in 1998.  She would continue her career playing professional basketball overseas between 1998 and 2002, signing to teams in Greece, Turkey, Israel, South Korea, Portugal, and Spain; before eventually retiring from basketball in 2002.

After Sports Honors And Awards:

Leslie is a 1998 recipient of the Johnny Bright Athletic Achievement Award, was inducted into the Fort Wayne, Indiana African American Museum as Outstanding Athlete of the 20th Century in 2000, in 2001 was the recipient of The Exemplary Fine Womanhood Award by Zeta Phi Beta, in 2000 named to the Fort Wayne News Sentinel Northeast Indiana’s Top 50 Athletes of the 20th Century, selected in 2006 to the Western Kentucky University All Continental Team as one of the top 15 players ever played at W.K.U.

In 2018 Leslie was awarded the Survivors Award by the Ayers Foundation, for overcoming obstacles to achieve success, was selected to the Indiana Basketball Hall Of Fame  Silver Anniversary Team as one of the top 18 players in Indiana from 25 years ago; and was honored that April.  Johnson also received the highest honor of her basketball career in December 2018, that she was selected individually to be Inducted into the Indiana Basketball Hall Of Fame; occurring in her first year eligible.

Leslie served as Manager and Executive Staff Member for the Indiana Department Of Corrections – Indiana Women’s Prison, before Retiring after a 11 year career.  She and her spouse Carmen, are the Foster Parents to 4 children, continuing Leslie’s passion towards public service.

Leslie is also a current, active member with the National Basketball Retired Players Association, exclusive to only former WNBA, NBA, and Harlem Globetrotter Players. In 2017 she was voted in by the NBRPA  players, as the only female member to represent the NBRPA in a group designated to create opportunities for former players, streamline budget initiatives, and establish better partnerships with the Community.

Johnson is also a Business Owner of the Company Hushed No More, LLC, where she can be booked as a Motivational, Inspirational Speaker, and/or Life Coach.  She is a Powerful Speaker, who appeals to those that are struggling with addiction, grief, loss, their sexual identity, and/or depression.  As a life coach, she encourages individuals in her sessions to speak through their circumstance, find their truth, and discover their power.

HIGH SCHOOL ACCOMPLISHMENTS
• In 1993 Held The North East Indiana Career Scoring Record With 2,045
Points; Becoming • The First Player To Score More Than 2000 Points.
• 1993 Finished Northrop H.S. As The 7 th Leading Career Scorer In The State
Of Indiana History – 2,045 Points
• In 1993 Was Ranked 1 st Team All-American By U.S.A. Today
• In 1993 The U.S.A. Today Ranked Her The Number 1 Center In The Nation
• In 1993 Was Ranked 2 nd Team Parade Magazine All-American
• In 1993 Was Ranked The 9 th Best Player In The Nation By Women’s
Basketball News Service.
• 1993 Selected To First Team Indiana All – State
• 1993 Selected To The Indiana All Star Team
• In 1993 Scored 29 Points In The Indiana – Kentucky All Star Game,
Becoming The Most Points Scored In A Single All Star Game For Team
Indiana (Scoring 29 Points On 11-14 Shooting, With 10 Rebounds; In Only 19
Minutes Of Play)
• 4 Time All S.A.C. (City) Conference – Selected As A Freshman, Sophomore,
Junior, and Senior, Becoming The First Player To Ever Do So In The City Of
Fort Wayne
• 1993 21 Alive Player Of The Year In Fort Wayne, IN.
• Played on The 1990 And 1991 AAU National Champion Mohr Magic Team,
Becoming A 2 Time AAU-All American
• Led Northrop To 3 City S.A.C. Championships, 3 Regional Championships,
and 3 Appearances In The Title Game Of The Semi-State Championship.
• Selected To 1993 U.S. Olympic Sports Festival North Region Basketball
Team – Named On All-Festival Team
• In 1993 Chose To Play For Purdue University