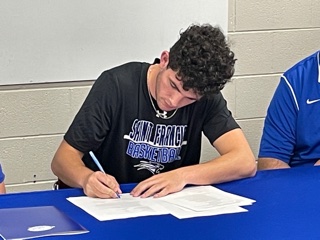 Blackhawk Christian guard Zane Burke has signed his letter of intent to play college basketball at the University of Saint Francis. He plans to major in Risk Management and minor in either Finance or Marketing. Playing for the Cougars gives him a chance to fulfill his long-time dream of playing college basketball.

“It’s been the goal ever since I remember; I started playing basketball, kind of just turning on the TV and seeing people playing college basketball and saying ‘they get to do this while going to school’ it was just kind of a dream for me, so now I get to do it; it’s just exciting,” Burke said.

Burke was the Braves’ second leading scorer this past year, averaging 17.7 points per game. He has averaged double digits in points per game. It’s the third year in a row where he scored in double figures. This past year, he also led his team in assists per game, averaging 6.2. He was a part of two state championship teams. He attributes much of his development to Braves’ head coach Marc Davidson.

“Coach Davidson is one of the best coaches I’ve ever had,” Burke said. “He’s done an excellent job of preparing me on the court, especially in the weight room. He’s done a lot of things I can take now into drills outside of school and go do them myself. Hopefully I can look forward to that this summer, getting into shape to play college basketball.”

Burke played shooting guard and point guard at Blackhawk Christian. He is willing to play whatever role is asked of him at Saint Francis.

“He was persistent; showing up to events and doing a lot of little things,” Burke said. “And that kind of just stuck out to me over all the other head coaches. He was just always there for me, always texting [me], and always cared.”

Burke looks forward to playing college basketball here in Fort Wayne, largely because he’ll have the chance to see family and friends on a regular basis.

“My mom and dad can come to every game,” Burke said. “My grandparents, and all my friends who are still here, administration, staff; they can all come to my games, and that’s just going to be a nice little boost for me.”

Burke is not the only Brave to sign for Saint Francis. Fellow guard Callan Wood signed his letter of intent to play baseball for the Cougars. Though they will no longer be teammates, Burke is looking forward to going to the same college as Wood; as well as other local students athletes.

“[Callan is] a great teammate of mine,” Burke said. “Going to Saint Francis you also have a lot of other local kids going there. So I have a lot of friends who’ll be playing football, baseball, basketball, and etc. So I’ll be able to just stay in touch with a lot of people I’m friends with right now.”