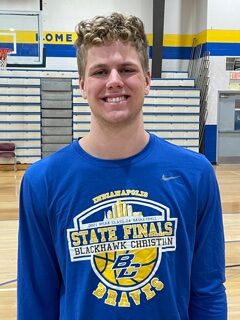 Even though Caleb Furst has played his final game at Blackhawk Christian, he can now add a new accolade to his career as a Brave. Furst has been named Mr. Basketball in the state of Indiana. He is the first BCS athlete to ever receive the honor. Indiana’s Mr. Basketball is awarded by the Indy Star.

“It’s a huge honor, you know, just to look back and see all the great names that have received this award, it definitely means a lot,” Furst said. “It’s very humbling [and] very honoring.”

Furst found out this past Wednesday night that he had won the award. Davidson reached out to Furst, but did not immediately break the news to him. When Furst did find out, he was taken by surprise.

“I got a call from the Indy Star Tuesday night,” Davidson said. “And so I reached out to Caleb, and I had to tell a little bit of a white lie to get him in here {into the gym}. But I got him and his parents in here, and we were able to surprise him, which was really cool, really special moment.”

“They told me that I was going to meet with Dean Pantazi [of WPTA] for the Fort Wayne Player of the Year Award,” Furst said. “And then I walked in and there was the Mr. Basketball jersey there. So it was definitely a big surprise.”

In his high school basketball career, Furst’s has achieved many accolades. Those include winning two state championships, a Mental Attitude Award at this year’s State Championship game, over 1,000 career points, and becoming Blackhawk Christian’s leading all-time scorer (he broke Frank Davidson’s record). But one of the things he’ll remember most from his career is the memories he and his teammates made.

“We would go over to each other’s houses and play sting pong a lot,” Furst said. “And then just winning the championships together with them, you know, they’re not just teammates, but some of my best friends, and so, it was great.”

Furst brings several skill sets to the table; including scoring, rebounding, and shot-blocking In each of the last two years, he has led the Braves in all three of those categories. But Davidson is particularly impressed by Furst’s emotional steadiness.

“Emotionally, he is really even-keeled,” Davidson said. “He does not get rattled, and I think that is a wonderful trait in an athlete. And he can be in the biggest of moments, in the biggest of games, and he’s as steady as can be. He just doesn’t get affected by the moment.”

Not only is Davidson impressed by Furst’s athletic ability. He’s also impressed by the type of person Furst is off the court.

“It’s been so fun just to watch the growth that has taken place [in Caleb],” Davidson said. “Obviously, as an athlete he’s improved by leaps and bounds. But really as a young man off the court, just to watch him grow and develop into the young man that he is, to me those are the real victories as a coach, when you get to see a kid that grows up and learns how to be a leader. Those are the real victories, and I’m just excited to watch Caleb continue to develop.”

Back in 2020, Furst announced his commitment to Purdue. He has not decided on a specific major, does want to have a major in the Pre-Med field. He is considering majoring in Kinesiology. Even so, Furst looks forward to starting college and being part of Boilermakers’ basketball.

“I’m really excited, I can’t wait to get down there in the summer and just get to work,” Furst said.